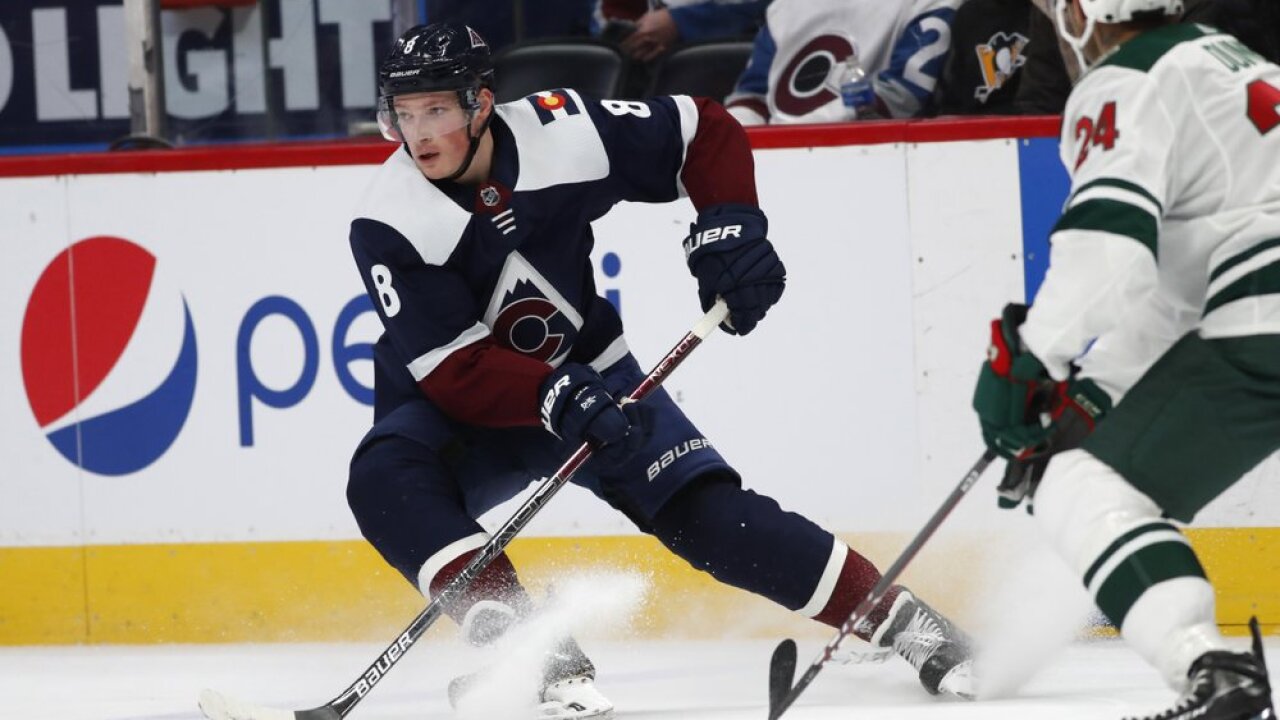 FILE - In this Dec. 27, 2019, file photo, Colorado Avalanche defenseman Cale Makar, left, looks to pass the puck as Minnesota Wild defenseman Matt Dumba covers in the first period of an NHL hockey game in Denver. Makar has won the Calder Trophy as rookie of the year. (AP Photo/David Zalubowski, File)

Only it had more to do with his home country than his home arena.

Draisaitl became the first German player to win the Hart Trophy as MVP after leading the league in scoring with 110 points in 71 games. He also won the Ted Lindsay Award for most outstanding player as voted by peers.

Draisaitl finished ahead of Colorado Avalanche center Nathan MacKinnon and New York Rangers winger Artemi Panarin in voting by the Professional Hockey Writers Association. He scored 43 goals, and his 67 assists were a career high despite the regular season being cut short.

Winnipeg’s Connor Hellebuyck won the Vezina Trophy as top goaltender, Nashville’s Roman Josi got the Norris Trophy as the best defenseman, and Colorado’s Cale Makar won the Calder Trophy as rookie of the year.

Draisaitl is the second Oilers player to win the Hart in the past four years following Connor McDavid, who is widely considered the best hockey player in the world. Draisaitl played with and without McDavid this season and produced even more.

“I think Connor and I have a very healthy, great, competitive relationship and we just try and make each other better every day,” Draisaitl said.

Edmonton was eliminated in the qualifying round of the expanded 24-team playoffs despite playing games in its — empty, of course — home rink. Minutes before the Dallas Stars and Tampa Bay Lightning faced off in Game 2 of the final, Draisaitl accepted the Hart and Ted Lindsay virtually from his home in Cologne, Germany, where it was already early Wednesday morning.

Draisaitl didn’t get to celebrate with family members because they were asleep and would rather still be playing for the chance to win a title and add another white “NHL STANLEY CUP CHAMPIONS” banner to the rafters at Rogers Place.

“It’s a nice personal reward,” Draisaitl said. “But there’s nothing that comes ahead of the Stanley Cup. That’s the same for any player in the league. If I could hand those two or three awards back in for a Stanley Cup, I would do that in a heartbeat and I think so would everyone else.”

Hellebuyck is the first player from the Jets/Atlanta Thrashers franchise to win the Vezina. After backstopping a Winnipeg team with an injury-ravaged blue line, he finished ahead of Boston’s Tuukka Rask and Tampa Bay’s Andrei Vasilevskiy in voting by general managers.

The 27-year-old American, who had said one of his goals was to win the Vezina, said, “It almost feels like getting a little bit of a monkey off my back.”

Josi won his first Norris at age 30 after setting career highs with 16 goals, 49 assists and 65 points. He finished ahead of Washington’s John Carlson and Tampa Bay’s Victor Hedman, the latter of whom was a finalist for the fourth consecutive year and is a playoff MVP candidate.

“He’s one of those guys who could probably win this award every year,” Josi said of Hedman.

Makar edged out Vancouver defenseman Quinn Hughes in a tight race for the Calder. The 21-year-old played 21 minutes a game and was the Avalanche’s second-leading scorer behind MacKinnon.

Like Draisaitl, Makar was (virtually) presented the award by Wayne Gretkzy on an awards show with an Oilers flare. That made it even more special.

“To have Wayne Gretzky give it to me, that was pretty cool,” Makar said. “I had never met him before, so that was a pretty surreal moment for me.”

Makar is the first defenseman in Avalanche/Nordiques history to win the Calder Trophy. He is the sixth player in franchise history to win the award and the fourth since the team relocated to Denver, joining Chris Drury (1998-99), Gabriel Landeskog (2011-12) and Nathan MacKinnon (2013-14). Peter Stastny (1980-81) and Peter Forsberg (1994-95) both won the Calder during the organization’s time in Quebec.