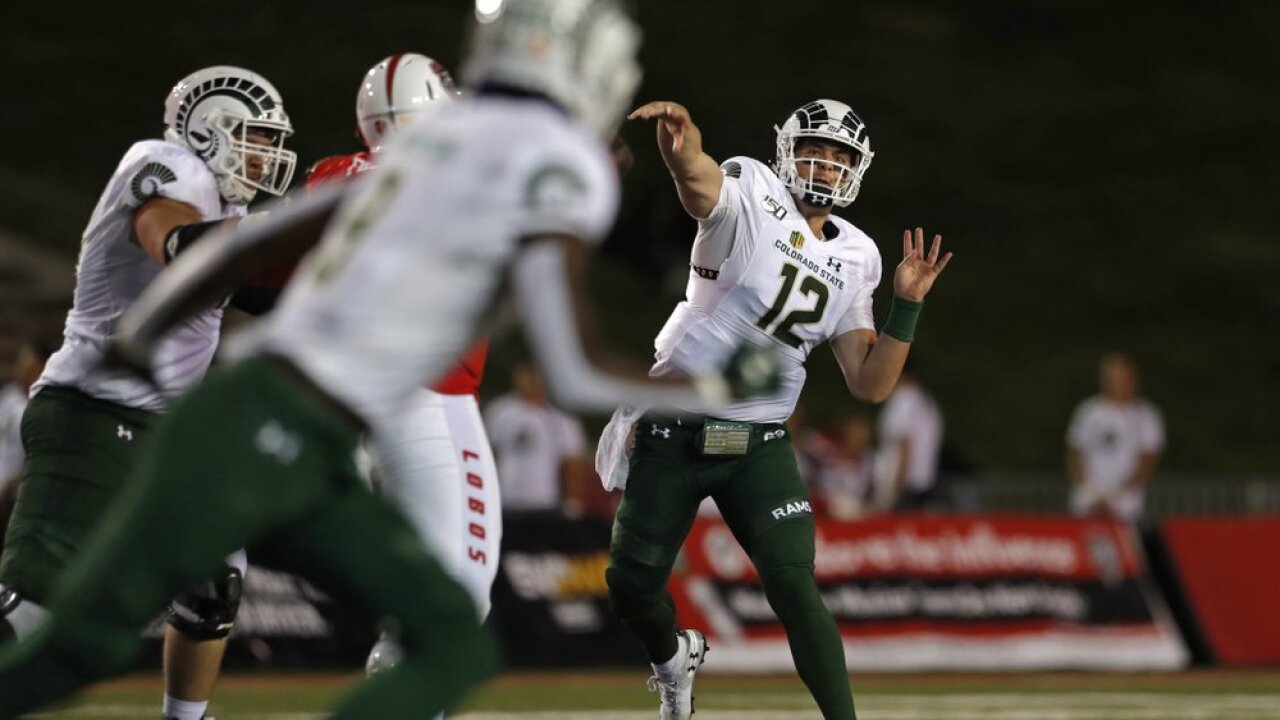 ALBUQUERQUE, N.M. (AP) — The Colorado State road trip to New Mexico did not get off to a great start as mechanical problems with the airplane kept the team grounded in Fort Collins an extra six hours.

So with some time to kill, the Rams took in a movie, said receiver Warren Jackson, who was back on the field after a two-game absence for a separated shoulder.

“We didn’t let it phase us because we were having a good time,” he said. “We were bonding on the bus with our teammates, learning new things that we hadn’t learned before from a lot of guys. That also played into this victory.”

This victory was a 35-21 win over New Mexico on Friday.

And as for that movie, well, “that movie was insane,” Jackson said. ‘“Joker.’ It’s crazy. It was really intense. It caught me by surprise. It scared me.”

Perhaps the joke was on the Lobos and it was Jackson doing the scaring as he finished with a career-high 214 yards receiving and two touchdowns.

“That’s a different football team when No. 9 (Jackson) plays,” New Mexico coach Bob Davie said. “He was a matchup nightmare for us.”

“Your eyes kind of open up a little bit,” he said of seeing Jackson in man coverage. “When you get a one-on-one matchup with a guy like that; he’s 6-6. Not many (defensive backs) are that tall. You just give him a chance. He’ll go out there and make a play. Having him back this week definitely helped a lot.”

That all played a role in Colorado State’s victory, O’Brien said.

“Guys are making plays and running down the field scoring touchdowns,” he said. “It’s a big stat day for me but it’s just nice to see our hard work playing off and guys making plays when we need them.”

The Rams jumped out to the early lead on a 42-yard touchdown catch by Trey McBride, but New Mexico scored the next two touchdowns, one coming after Carroll went 56 yards before dropping the ball untouched on the 1-yard line.

“We saw snatches of really some good things,” Davie said. “Some really spectacular individual performances. Bryson Carroll played like we hoped he would be, stepped up with what he had in the past with that explosive quick kind of running back.”

It was something Rams receivers coach Joe Cox said was a possibility.

“Coach Cox said any ball in the air, it’s your ball,” Jackson said “It was something I can do on this particular play right away and I did. I’m a lot taller. I’m 6-6, so I would hope so. That’s definitely the mentality that coach Cox preaches.”

Marvin Kinsey, who rushed for 85 yards and two TDs for Colorado State, scored his first touchdown five seconds before halftime.

The Rams took a step forward toward achieving bowl eligibility, but they have little room for error, particularly with improving Wyoming and No. 14 Boise State looming as the season’s final two games.

The Lobos’ slide takes them to the bottom of the conference’s Mountain Division and now they hit the difficult portion of the schedule as all six upcoming opponents are above .500.

“I thought he was hot early,” Rams coach Mike Bobo said of O’Brien. “He definitely has the arm talent. He just has to get more comfortable in the pocket. He’s got a little bit of Brett Favre in him in that he’s going to run around and sling the ball. It drives you crazy as a coach. Real crazy. But at the same time his play-making ability. I think he can be a difference, but he just has to be careful sometimes.”

Colorado State next pays at Fresno State on Oct. 26.