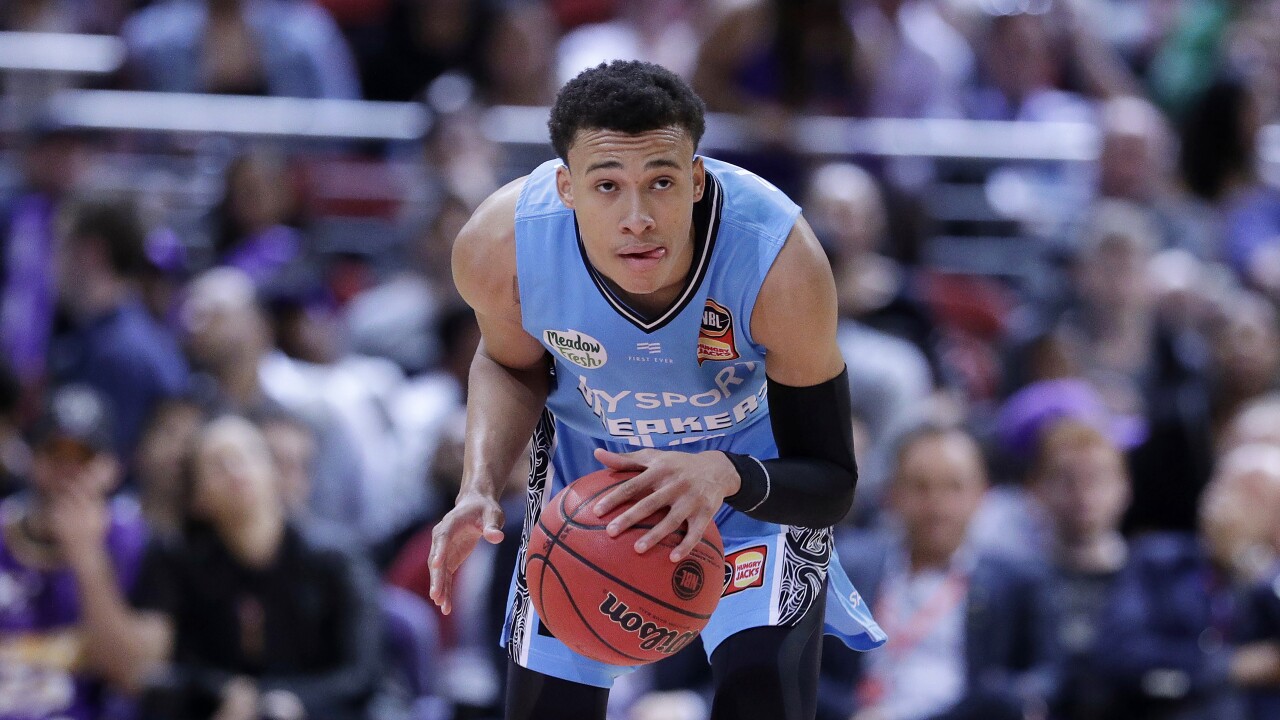 Copyright 2020 Scripps Media, Inc. All rights reserved. This material may not be published, broadcast, rewritten, or redistributed.
Rick Rycroft/AP
Roderick "R. J." Hampton of the New Zealand Breakers during their basketball game against the Sydney Kings in the National Basketball League in Sydney, Friday, Oct. 18, 2019. (AP Photo/Rick Rycroft)

DENVER (AP) - The Denver Nuggets picked up a center to learn under Nikola Jokic. Then, they grabbed a guard to be mentored by Jamal Murray.

A productive night for an already youthful team that’s coming off a run to the Western Conference finals.

Arizona big man Zeke Nnaji was taken with the No. 22 overall pick in the NBA draft Wednesday as the Nuggets added the mobile big man with a soft touch.

Not done yet, Denver orchestrated a deal - it's still being finalized - to acquire guard R.J. Hampton from New Orleans for a future protected first-round pick, according to a person with knowledge of the situation. The person spoke on condition of anonymity because the trade hasn't been announced.

Hampton was selected by Milwaukee with the 24th overall pick, though he didn’t stay long. The Bucks were expected to send the 24th selection to the Pelicans as part of a package of picks included in a deal to acquire veteran guard Jrue Holiday.

The 19-year-old Hampton decided against playing college basketball and instead took his talents overseas to play for the National Basketball League’s New Zealand Breakers. The 6-foot-5 point guard returned to the United States in February to recover from a hip injury and prepare for the draft.

He's been described as a versatile guard with a quick first step. He could be taken under the wing of Murray, the point guard who turned in one sizzling shooting performance after another during the postseason.

Nnaji was the Pac-12 Conference freshman of the year after a season in which he averaged 16.1 points and 8.6 rebounds. His 14 double-doubles were the second-most by a Wildcat freshman in program history.

Nnaji, who's 6-foot-11 and 240-pound, is looking forward to working alongside Jokic.

“He's a superstar. He's one of the best centers in the league,” said Nnaji, who added about 20 pounds of muscle and improved his jump shot since the college season abruptly ended due to the COVID-19 pandemic. “His vision and his passing is incredible. He's super talented. ... I'm excited to learn from him.”

Nnaji just may be counted on right away, too, depending on the team's decisions with free agent big men Mason Plumlee and Paul Millsap. Denver also has 7-foot-2 center Bol Bol, but he's more of a wing sort of player.

One of the priorities for Denver before camp opens may revolve around bringing back versatile player Jerami Grant, who’s reportedly opting out of his deal.

But their extended stay inside the NBA bubble was halted when LeBron James and the Los Angeles Lakers sent them packing after Game 5. The Lakers captured the NBA title over Miami.