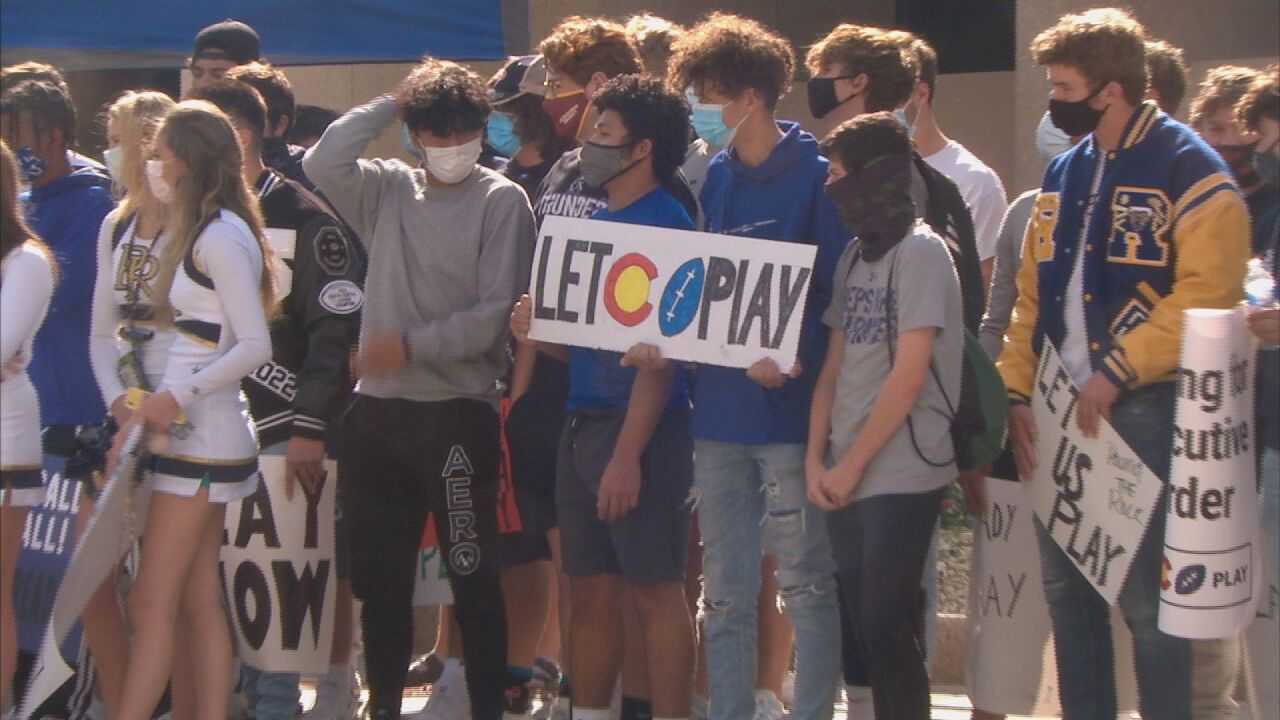 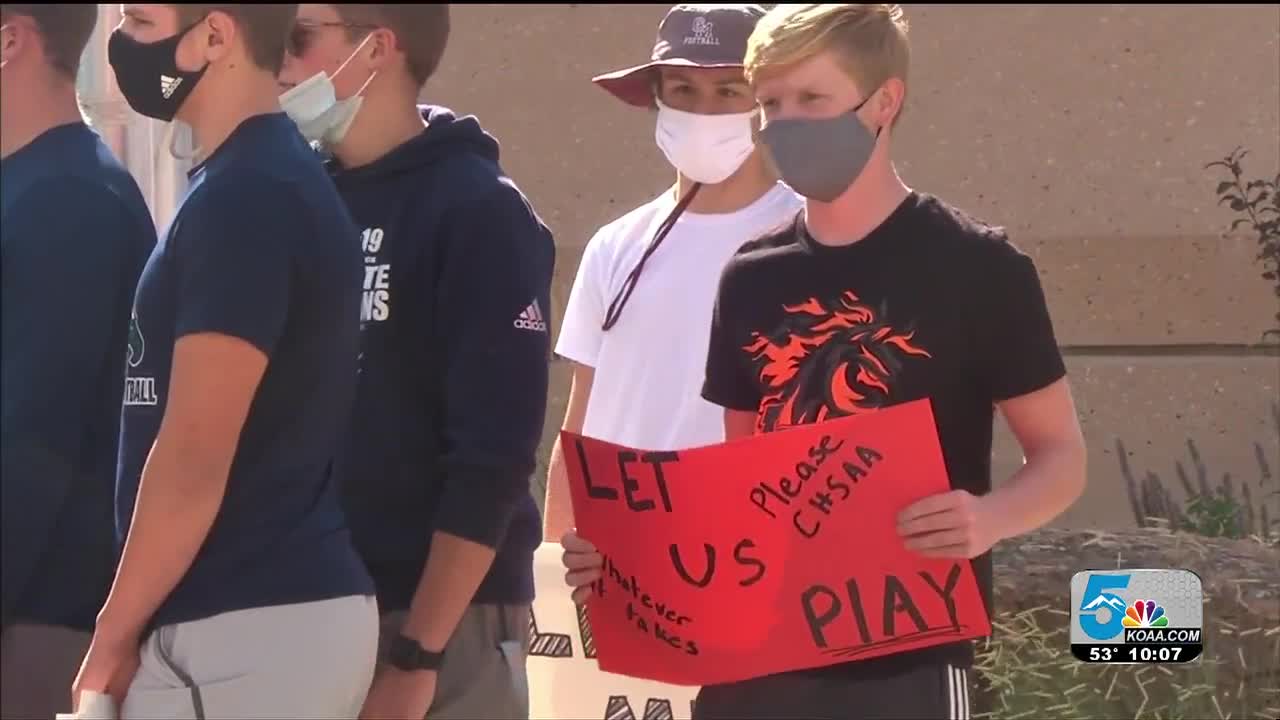 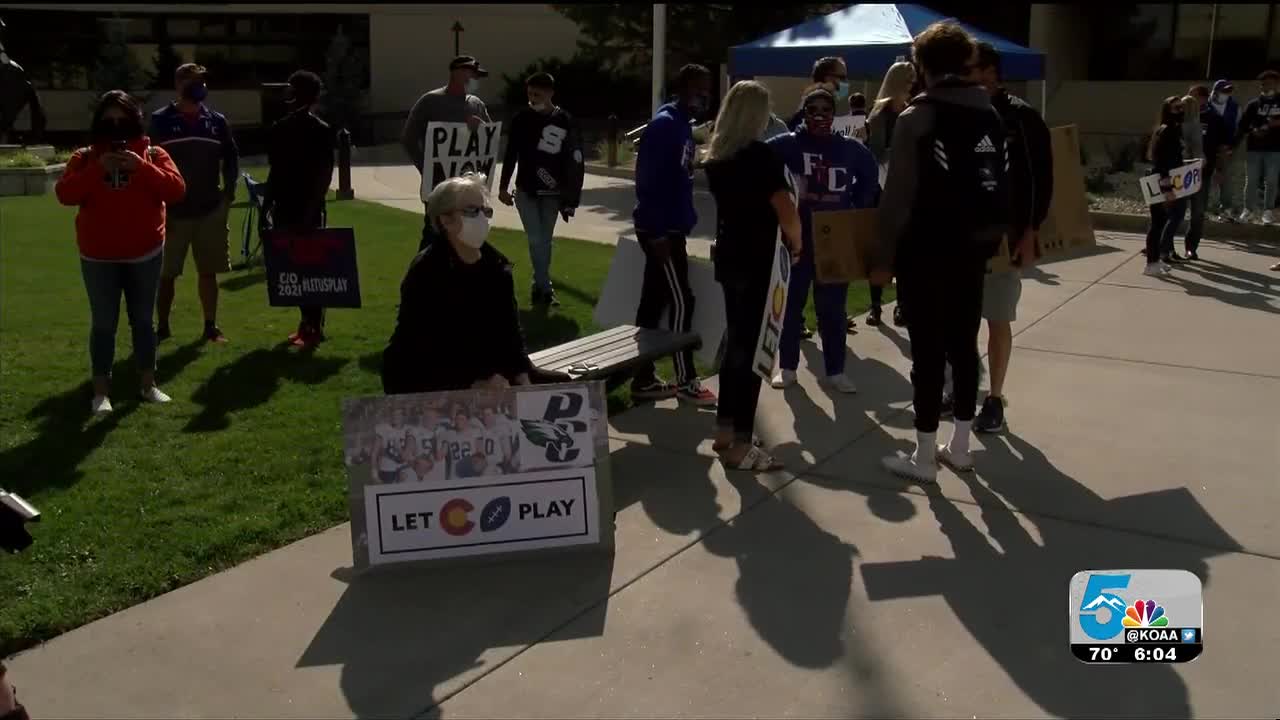 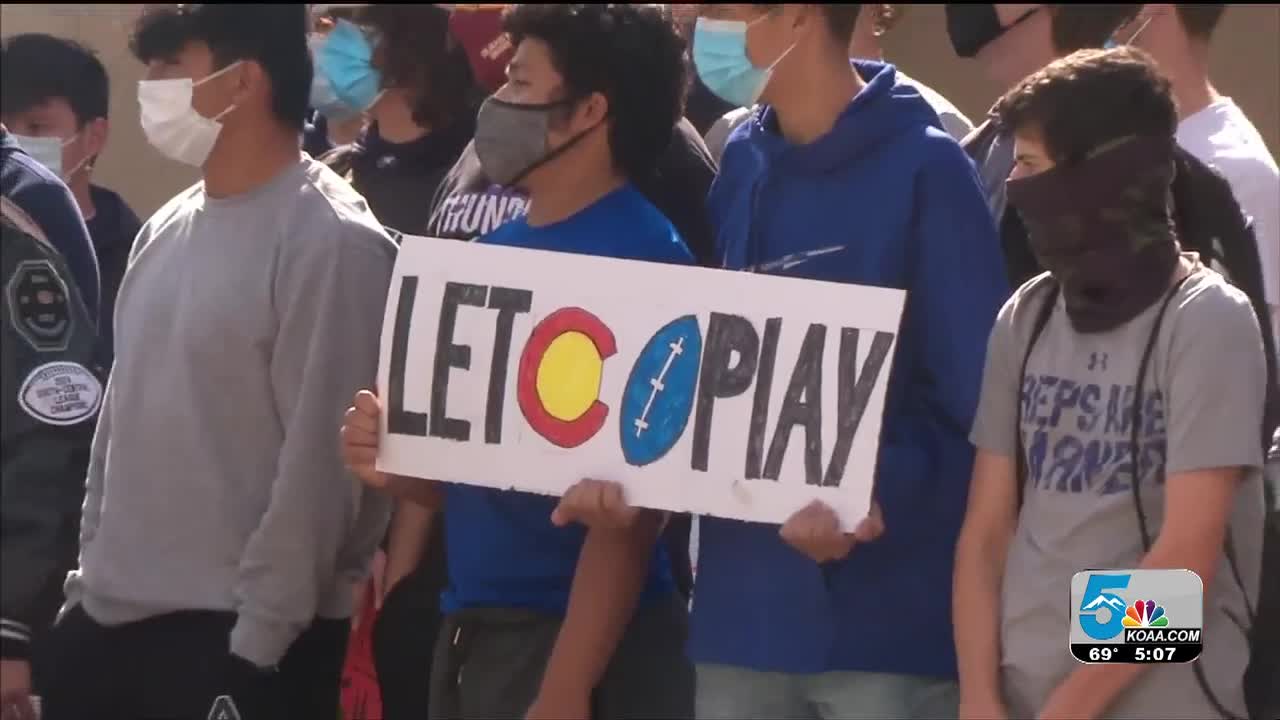 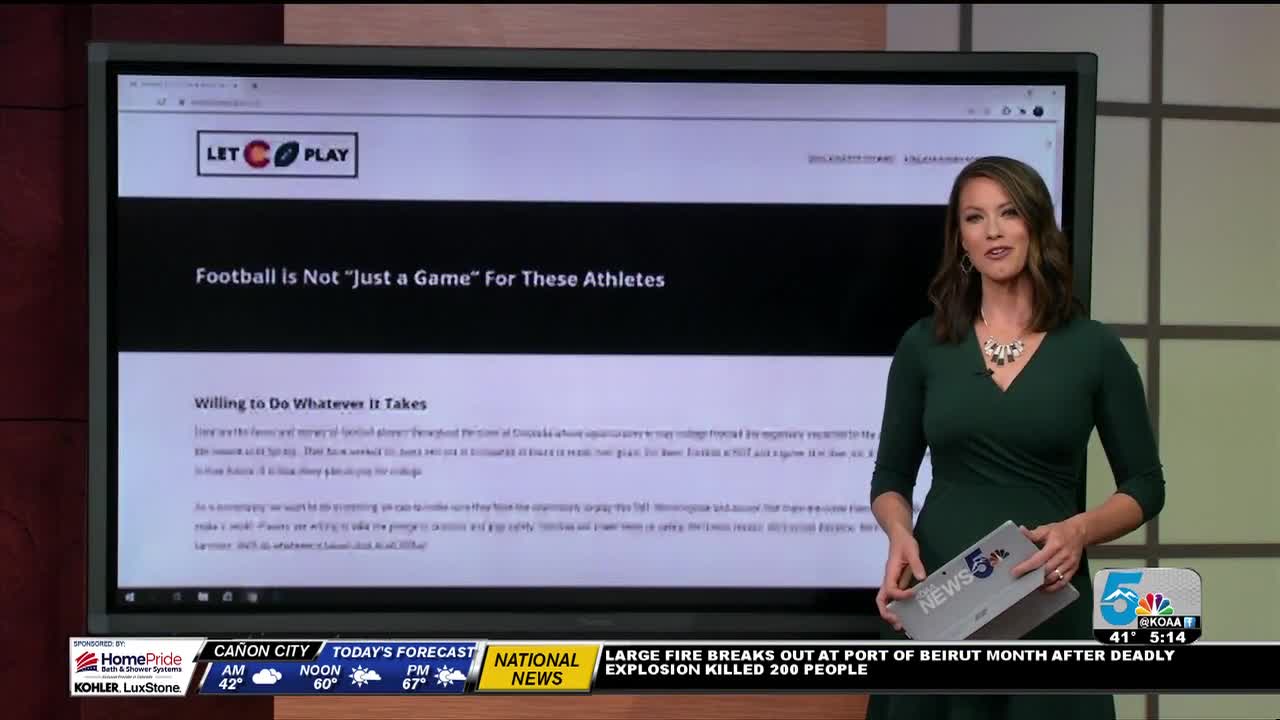 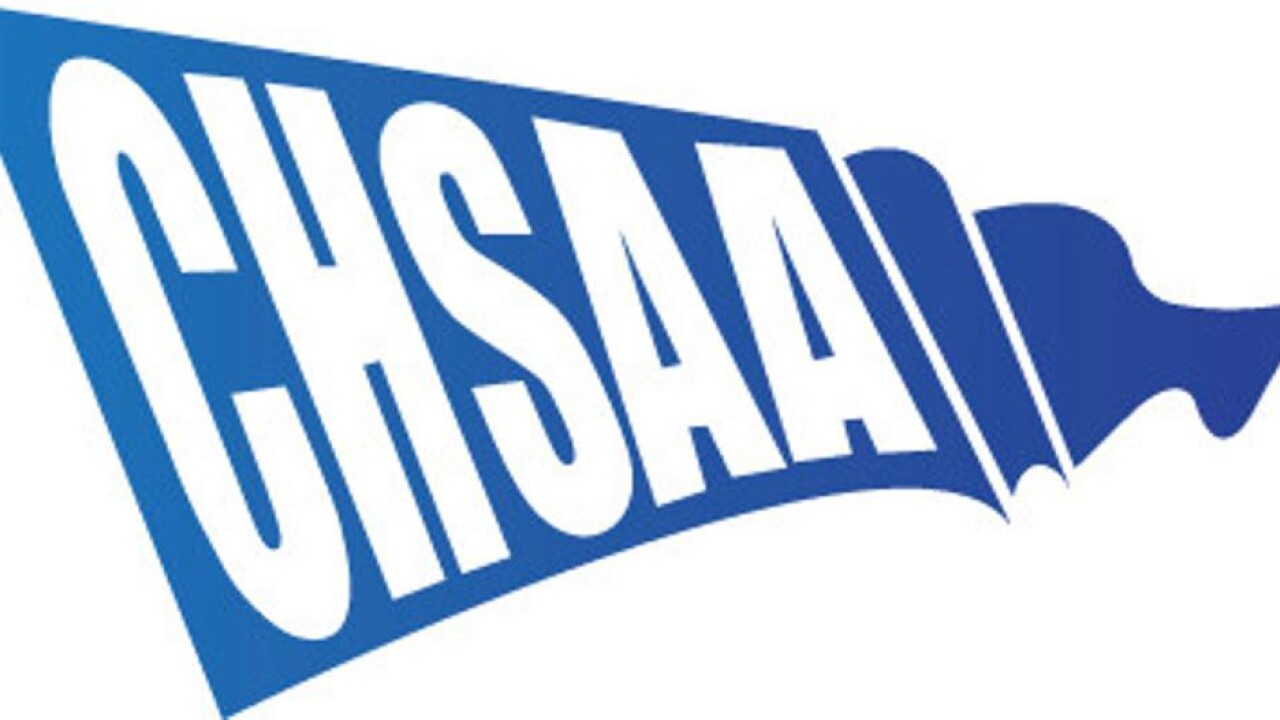 COLORADO SPRINGS — It has been a wild week for high school football athletes in Colorado and it continued on Friday.

Gov. Jared Polis indicated on Friday that the state may be moving closer to a high school football season in the fall.

In a late afternoon tweet on Friday, the governor said he is working with CHSAA to approve variances to allow football and all fall sports to happen.

Also happening on Friday were local protests, all over the state, put on by a local campaign called 'LetCOPlay'

Over 75 players, parents and coaches came together in protest in Colorado Springs at the El Paso County Commissioners office.

"It just goes to show that we may not agree on the football field, but we are still all a band of brothers still working together," explained Cam Jones, a senior tight end & outside linebacker at Palmer Ridge High School.

Their message was simple: LetCOPlay football.

"They defiantly got a lot of people's hopes up and then shattered it back down," explained Kobe Young, a senior safety & wide receiver at Rampart High School.

"I do not believe were being represented fairly at the moment," added teammate and Rampart senior quarterback Cale Cormaney. "All I would ask is what would they would do if their kids were in this scenario. And as parents I know they would want their kids to get the best opportunities. And they are holding us back from the opportunities they could be getting."

"Not all of us have the same time in the spring," said Ian Carroll, a senior tight end, wide receiver & defensive end at Pine Creek High School. "I have to get ready for college and I have to work up that money. I can't rely on just all scholarships. Football was my one way to get that outlet. If those 38 other states have that advantage, what are we supposed to do about it?"

And these players want to make one thing clear: this isn't just about football recruiting and scholarships.

"This is much bigger than football," explained Ty Deppe, a junior lineman at Pine Creek High School. "Football is like a brotherhood, a bond amongst a group of young men. I think that it is very important in society today."

So as Blanford-Green meets with the Governor on Friday once again to discuss fall sports, these athletes are still holding out hope.

"I do not think it is coincidental that it's happening," said Kaden Dudley, a senior wide receiver & defensive back at Palmer Ridge High School. "So I am hoping to hear good news from it."

The good news may be coming on Monday as CHSAA and the governor's office will need to make a decision soon on the fall sports season.

On Friday, CHSAA announced that commissioner Rhonda Blanford-Green is meeting with the Governor's office to gather information about potential variances the state would allow for all sports.

According to a release, the Gov. Polis & COVID-19 Response Team and CHSAA were not on the same page with the variances that could be allowed to make a fall sports season happen.

Blanford-Green is looking to get the exact details of what the governor will allow.

Additionally, major concerns of the Board of Directors were that many schools are still trying to safely return to in-person learning, and still remain unable to physically access their buildings. Certain districts do not have the financial resources to be able to safely begin fall sports.

The Governor's office has indicated that it may be able to provide resources to schools to help facilitate their activities programs. Blanford-Green is also seeking to further clarify this possibility.

On Monday, the Colorado High School Activities Association (CHSAA) announced they would reconsider delaying the high school football season, and other fall sports, to the spring.

But after a CHSAA Board of Directors meeting on Wednesday, the Board of Directors unanimously voted to not reconsider any adjustment to the 2020-21 sports calendar, which was approved on Aug. 4 by Gov. Jared Polis & his COVID-19 Response Team.

"We understand that our school communities would like to return to all levels of normalcy," said Troy Baker, the President of CHSAA's Board of Directors, and who is the athletic director at Buena Vista High School. "We listened to all parties and the voices of our membership resonated strongly to support the plan as approved in August. The plan aligns with the CHSAA mission. All students have an opportunity to play a season during the 2020-21 school year."

The board also referenced the COVID-19 pandemic for a reason to keep the schedule the way it is currently set up.

On Friday, a local campaign named 'LetCOPlay' has organized rallies all over the state of Colorado asking for an executive order from Gov. Polis, and allow variances to have a high school football season.

In Colorado Springs, a peaceful protest is planned at the El Paso County Commissioners office starting at 3:30 p.m.

Players and coaches from local high schools plan to speak and attend. A full list of protests around Colorado can be found here.

On late Wednesday evening, Gov. Polis tweeted saying that he "encouraged them (CHSAA) to add fall football season." The tweet also said that he would allow variances to have up to 50 players on each sideline.

"While I’m disappointed w(ith) the decision, every CHSAA sport will have a season this school year."

CHSAA says it will continue to meet regularly with the Governor’s staff, COVID-19 Response Team, and educational and health officials to implement the 2020-21 Activities Calendar.