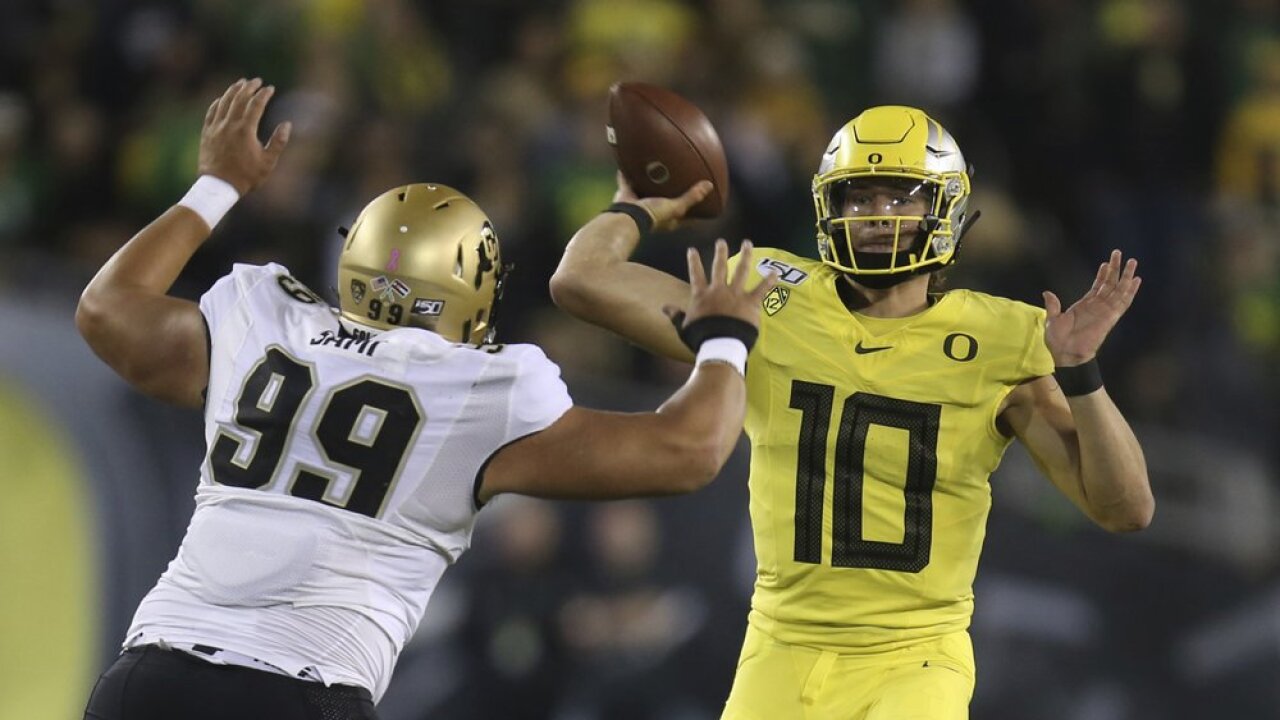 They saw results on Friday night.

Herbert threw for 261 yards and two touchdowns, while Cyrus Habibi-Likio rushed for three more, and Oregon beat Colorado 45-3 on Friday night for its fifth straight victory.

“We talked about starting fast and moving the ball, and that’s something we did today,” Herbert said. “We got the ball spread around and guys made plays. It was fun to watch.”

Jaylon Redd rushed for a touchdown and caught a pass for another score for the Ducks (5-1, 3-0) who are 3-0 to open Pac-12 play for the first time since 2013. CJ Verdell rushed for 171 yards and the Ducks finished with 527 yards offense, including a season-best 288 on the ground.

Oregon has not dropped a game since the season opener against Auburn.

Steven Montez threw for 131 yards for Colorado (3-3, 1-2) but he was intercepted four times on four consecutive drives. It is the second straight loss for the Buffaloes, whose three points were the fewest they’ve scored in a game since they were shutout by Washington State in 2017.

“Guys are frustrated. Guys want to win,” said Colorado coach Mel Tucker. “The answer is in the simple truths. That’s what I told them. We’ve got to take time on the way back to look within ourselves to get there.”

Colorado receiver Laviska Shenault Jr. was day-to-day going into the game but he started and finished with four catches for 70 yards. He strained a core muscle against Arizona State on Sept. 21 and missed last weekend’s loss to Arizona.

Herbert was 18 of 32 with two touchdowns, bringing his total to 17 TDs this season. His string of games with a touchdown pass is the longest nationally among active players.

He credited the defense for the victory: “When they play like that it makes our job so much easier.”

The Ducks scored on their opening drive on Herbert’s 7-yard scoring pass to Jacob Breeland. It was the tight end’s sixth touchdown reception of the season.

But Breeland was injured late in the first quarter when he was tackled after catching a 22-yard pass from Herbert, and he limped to Oregon’s medical tent on the sideline. He later emerged with a brace on his left leg and did not return.

Coach Mario Cristobal did not have an update on Breeland’s injury after the game.

Colorado’s James Stefanou made a 27-yard field goal to close the Buffaloes within 7-3, but Camden Lewis had a 32-yarder for the Ducks and Habibi-Likio extended Oregon’s lead to 17-3 with a 1-yard run.

The Buffaloes were denied a chance to score — and make it a game — before halftime when Verone McKinley intercepted Montez in the end zone. The pick ended Montez’ streak of 115 consecutive passes without an interception.

The Ducks capitalized, marching downfield and scoring on Redd’s 3-yard run to make it 24-3 at the break. It was Redd’s fifth straight game with a touchdown.

Montez was intercepted again on Colorado’s first drive of the second half, leading to Herbert’s 13-yard touchdown pass to Redd. Habibi-Likio’s 3-yard touchdown run came on the drive following Montez’ third interception, against by McKinley, giving the Ducks a 38-3 lead.

Montez was intercepted again on a pass to Shenault in the end zone by Nick Pickett.

“They’re a high-powered offense, they score a lot of points on a lot of people. We didn’t know exactly what to expect,” Cristobal said. “We’re obviously just doing some really great things on defense, and that tonight was going to be the biggest test of all. Our offense knew we had been close to making some really big plays, but tonight it had to happen. There was going to be very little wiggle room if they (Colorado) got their offense going.”

Colorado: Receiver K.D. Nixon was also day-to-day heading into the game but played. ... Colorado was coming off a 35-30 loss at home to Arizona. ... Defensive end Janaz Jordan left the game with a groin injury. ... Montez’s four interceptions were a career high. ... Tight end Jalen Harris was ejected after a personal foul in the third quarter.

Oregon: The Ducks held their four previous opponents to single digits in scoring. ... There were several NFL GMs at the game, including Oakland’s Mike Mayock. ... Safety/nickel Jevon Holland was carted off the field before halftime. His injury was unclear. ... Oregon was coming off a 17-7 victory over Cal.

THE LAST TIME: The last time Colorado played the Ducks back in 2016, Montez got his first start subbing for injured quarterback Sefo Liufau. He threw for 333 yards and three touchdowns and also ran for 135 yards and another score in a 41-38 upset victory at Autzen.