Rockies win thriller in extra innings to advance in the postseason 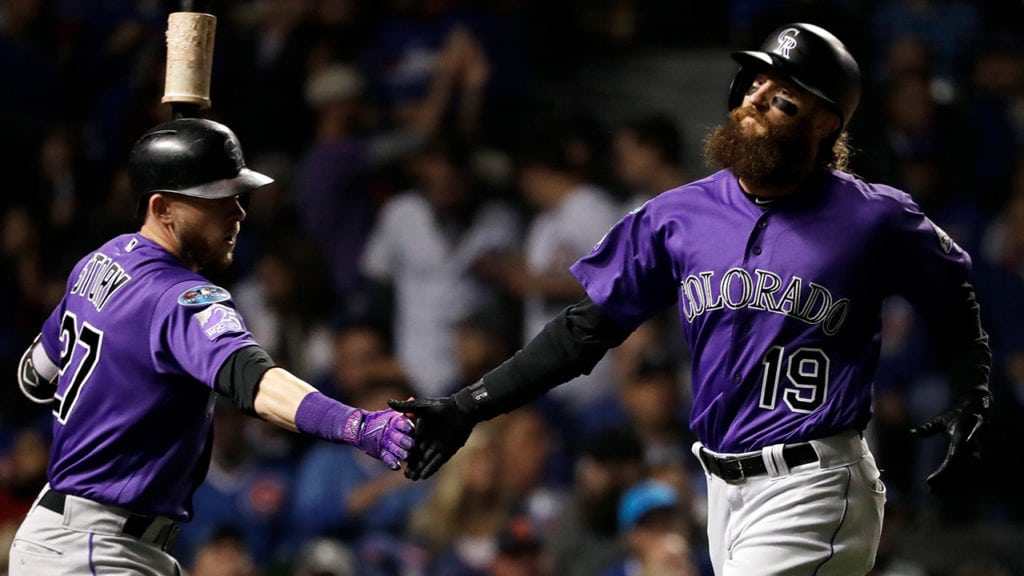 CHICAGO – Rocktober is off to a heart-stopping start!

The Rockies won a thriller in the longest sudden-death playoff game in major league history, beating the Cubs 2 to 1 in front of an exhausted and stunned crowd at Wrigley Field.

The Rockies finally broke through with Trevor Story, Gerardo Parra and Tony Wolters leading a two-out rally in the top of the 13th inning in a game that ended after midnight in Chicago.

Story was able to get a base hit off of Cubs starter turned reliever Kyle Hendricks, and Parra was able to guide a single of his own into right field in the next at-bat.

That’s when Tony Wolters, who came into Tuesday’s game with a .170 batting average, played the hero, driving in Story as the go-ahead run.

Rockies Reliever Scott Oberg then closed out the game, for his third career save.

The NL Wild Card game turned into an unexpected pitcher’s duel in a game featuring two of the best offenses in the National League.

The Rockies struck first off of Cubs Ace Jon Lester when Nolan Arenado drove in Charlie Blackmon on a sacrifice fly in the first inning, but the Rockies couldn’t solve the lefty for the rest of the night. Lester finished with nine strikeouts over 6 innings, puzzling the Rockies lineup after the first frame

However, as it had for most of the season, the Rockies bullpen caused fans’ heart rates to rise.

Adam Ottavino replaced Freeland and ran into trouble in the seventh inning. Catcher Drew Butera was called for catcher’s interference and Ottavino walked Willson Contreras to load the bases with two outs.  However, Colorado averted disaster, when Ottavino struck out Jason Heyward to preserve the one-run lead, but it wouldn’t last long.

A two-out single from Anthony Rizzo and a stolen base by pinch-runner Terrance Gore put a runner in scoring position in the bottom of the eighth. Baez then tied the game with a double over the head of Trevor Story, tying it at 1 with the Rockies just four outs away from advancing.

However, Rockies Closer Wade Davis came in to secure a final out in the eighth inning, stranding the go-ahead run at second base.

Davis went on to pitch a scoreless ninth, and Seunghwan Oh got through the top of the Cubs lineup in the 10th.

In the top of the 11th, the Rockies had a chance to end it much earlier. Nolan Arenado reached on a single with one out, and Gerardo Parra walked with two outs.  Parra’s hustle to second base gave the Rockies another chance when he beat Kris Bryant’s throw to second that could have ended the inning. Unfortunately, David Dahl couldn’t capitalize, grounding out to first, wasting another opportunity to win.

The game took a strange turn in the bottom of the 11th, when Javier Baez ran into Nolan Arenado, who had just fielded a grounder off the bat of Willson Contreras. Baez then hugged Arenado, who was then couldn’t try to throw out Contreras. Rockies Reliever Chris Rusin ended up rendering the bizarre play moot, striking out Victor Caratini to end the inning.

But in the top of the 13th, the Rockies finally broke through, with Story scoring one of the biggest runs in franchise history and extending Rocktober by at least three more games.

Colorado will head to Milwaukee to face the NL Central Champion Brewers (96-76) on Thursday, where the Rockies will look to improve upon their 92-72 record.