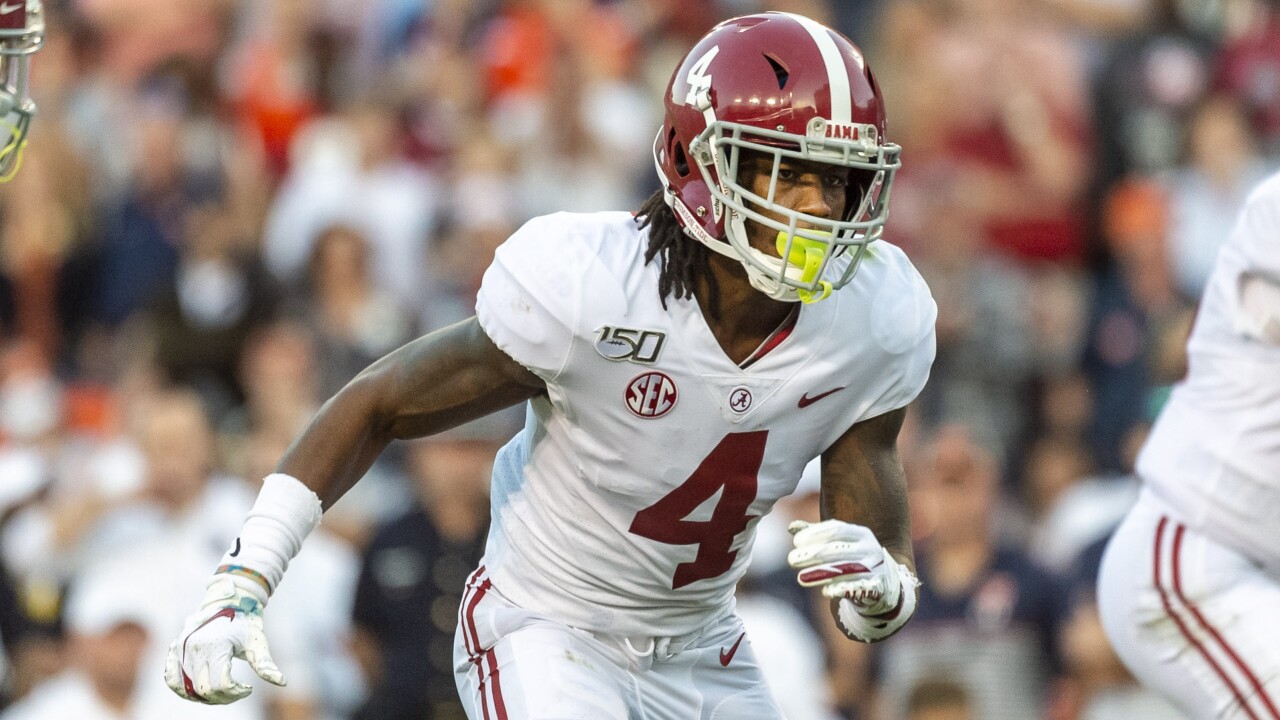 DENVER — The social media videos don't make Jerry Jeudy. They revealed what we already knew he was.

The former Alabama star runs routes with more polish than Pledge. He stops, starts, and comes out of breaks with such burst it remains hard to believe he turned 21 in April. When looking for reasons why the Broncos' offense will find the toll road to the end zone this season, Jeudy sits near the top of the list.

Looking to counter the world champion Kansas City Chiefs, a team that has beaten them nine straight times, the Broncos built their own track team this offseason, selecting Jeudy 15th overall, followed by blurry wideout K.J. Hamler in the second round.

How quickly Jeudy adjusts to the NFL will go a long way in determining how much the Broncos improve.

What makes Jeudy so intriguing is the maturity of his skillset. At Alabama, he caught slants, deep balls and won contested battles. He finished his career with 179 receptions for 2,742 yards and 26 touchdowns.

He was not the first receiver selected in the draft — that honor belongs to former teammate Henry Ruggs III — but graded out that way for many experts. Can it translate to the Broncos where he develops into a second threat to create better matchups for Pro Bowler Courtland Sutton, while opening the middle of the field for promising tight end Noah Fant?

Drew Lock is attempting to microwave the chemistry with Jeudy and Hamler.

"Really, it’s going to come from us being on the field, being able to build a relationship out there, show them that I’m here, I’m ready and I’m prepared. They’re going to show me the same thing so we can earn each other’s respect. Then after the respect is earned, that’s when the friendship comes. That’s when we can really start to talk and get to know each other," Lock said. "The easiest conversations have been standing outside six feet apart giving Jerry some crap about the Missouri-Alabama game and talking to all the guys about some college stuff because they just left from there. It’s pretty easy to relate since I’m only a year and a half, almost two years out of it.”

The NFL is littered with underwhelming statistics from first-round, rookie receivers. As Broncos coach Vic Fangio explained recently, the college game doesn't necessarily prepare them as they "are running wide open," and not "running NFL-type routes on a consistent basis." Fangio, though, offered a qualifier on Jeudy, who trained in the offseason with Olympic gold medalist Michael Johnson.

"Everybody progresses at a different rate. I think in Jerry's case, he’s coming from an offense that should help him progress quicker based upon the work he puts in. I think the same thing with KJ," Fangio said.

There are footsteps to follow in Jeudy's past that suggest he will take the next step smoothly. Go back to high school. He was teammates initially with Calvin and Riley Ridley, both NFL receivers. He transferred after a coaching change, determined to become a top recruit in the country.

"That really comes surrounding myself with the right people, people I grew up with, like Calvin and Riley, they were tremendous route runners," explained Jeudy on how his work ethic developed. "When you are surrounded by greatness, you have no choice to become great."

Jeudy was challenged as a kid. Imagine playing a pick up game in the neighborhood, and your quarterback is a future NFL MVP.

"Yeah, I knew Lamar (Jackson) when I was younger. We used to stay next to each other," Jeudy said. "I played a few street football games with him."

Jeudy presents an interesting case. While a breathtaking athlete, he didn't dream of the NFL as a kid. He views football in levels. He knew college dominance was possible after he excelled as a prep. It's why he believes he's ready for the pro game. It has been a dizzying few months for Jeudy, delivering a huge bowl game performance against Michigan, training and excelling at the combine and learning a pro offense via Zoom meetings.

However, his focus never wavers. Jeudy plays for family, namely his late sister, Aaliyah. She was born prematurely with trisomy 18, a genetic disorder that leads to abnormalities in many parts of the body. Given little chance of survival, Lulu, as Jeudy called her, was a fighter.

"She motivated me a lot through this whole process. She battled adversity since the day she was born. Doctors said she wouldn’t make it past the age of four. With her fight and determination she made it past 7," said Jeudy, whose sister passed away in 2016 while he was in the high school state playoffs. "That gave me the drive to never be complacent and always stay driven."

He remains close to his family, and has plans to buy his mom Marie a house and a car. He is also a father. His daughter's name is a reminder of his future and reasons for playing: Journee Aaliyah Jeudy.

"It's a great feeling to bring somebody into the world. It's a wonderful experience," Jeudy said. "I am ready to see her grow."

The same could be said about Broncos Country and Jeudy. Watching his approach, his dedication to the craft, it feels like the Broncos' days of missing the playoffs are over.