Flacco out this week with neck injury 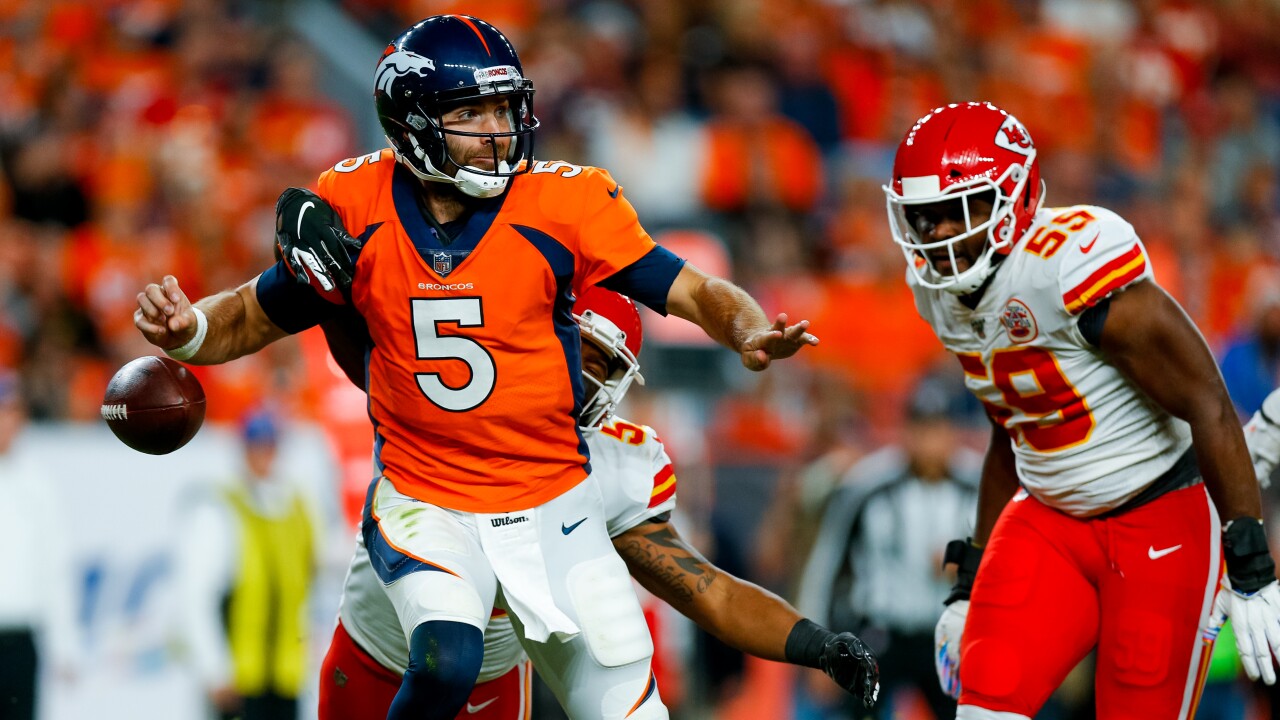 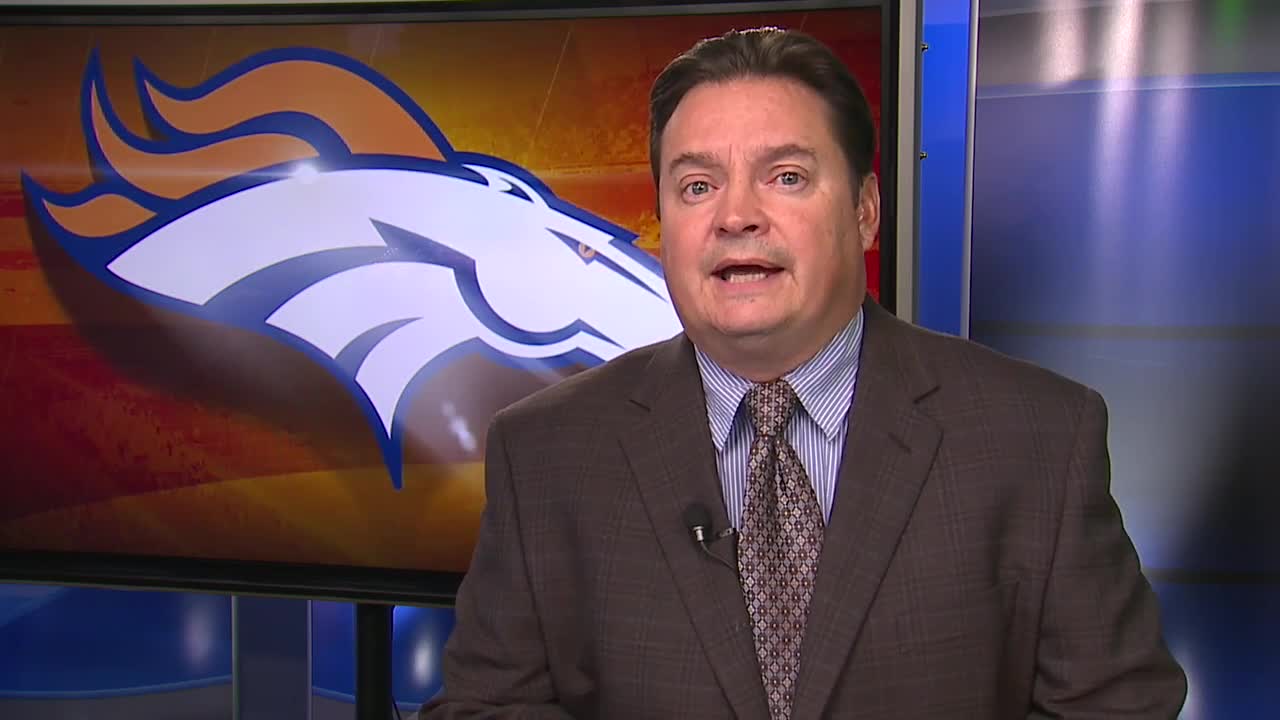 One day after Joe Flacco ripped the team's conservative playcallling, the Broncos made a pocket a change.

However, it was not because of Flacco's mouth, but his neck. The veteran quarterback was diagnosed with a herniated disc in his neck and will not play this week. Brandon Allen, acquired after preseason's end, will start with the team using this week's practice to determine if Brett Rypien or Drew Lock will be added to the roster as his backup. It also raises the question: Has Flacco played his last snap in Denver?

The Broncos would absorb a $13.6 million cap hit to cut him, but it would save more than $20 million with his salary coming off the books. That's an uncertain scenario -- though coach Vic Fangio said placing him on injured reserve is a "possibility" -- that will continue to unfold over the next nine weeks.

What is certain: Flacco is out.

"Joe's not going to play this week. He’s got a disk or neck injury and he’ll definitely miss this week. Then we’ll reevaluated after the bye and see where he’s at," Fangio announced.

Asked if Flacco will require surgery, “Um, they don’t know that yet. I think right at this minute, they don’t think so. But those things are fluid.”

Flacco said after the game that his neck had been bothering him for two weeks. He struggled to get dressed in the locker room afterward, and lacked mobility in his neck as I talked to him before he headed to the bus. So for conspiracy theorists, the injury is real. It creates an unlikely opportunity for Allen.

Despite backing up for years with the Jaguars and Rams, Allen has never appeared in an NFL game. He joked to Denver7 when the Broncos acquired him to replace Kevin Hogan, that "every quarterback I have been a backup for plays every snap. I am a good luck charm."

Allen, a former star at Arkansas, is 6-foot-2, 209 pounds and bears an uncanny facial resemblance to Paxton Lynch. The Broncos liked Allen's athleticism and knowledge of the offense. As for Rypien and Lock. Here's the quick synopsis. Rypien is a slight favorite to be activated this week as the No. 2 because he has been practicing since mini-camp without interruption. The Broncos could use him in the short-term then turn to Lock. Denver must decide within two weeks of Lock starting to practice on whether to bring him back from the IR. That seems an obvious decision now.

As such, Lock could practice this week, then the bye arrives, leaving Lock in position to serve as the backup at Minnesota and possibly start some games in December. There are a lot of plates in the air, but as of now, that is a realistic scenario.

The injury news dulled the story of Flacco's criticism of the Broncos' fourth quarter approach in Sunday's 15-13 loss to the Colts.

Flacco, a former Super Bowl MVP known for his measured comments throughout his 12-year career, reached his flash point, saying the playcalling showed the team was "afraid to lose."

"He was frustrated. I understand that," Fangio said. "I think he was talking more about the fourth quarter than the final drive(s)."

The issue of the day quickly shifted when Fangio revealed that Flacco will not play this week, and possibly will miss several weeks.

Regardless, Allen, the team's sixth starting quarterback since Peyton Manning retired after Super Bowl 50, inherits an attack that is struggling.

By any measure, the Broncos offense remains ineffective. Denver averages 15.6 points per game. Only Miami, the Jets, Washington and Cincinnati are worse. The Broncos rank 28th in second-half points. Worse, 24 of their 90 drives this season have been three-and-outs, the league's third highest percentage. It came to a boil Sunday as the Broncos to soak the the rest of the clock.

The third-and-5 on the second-to-last possession created the fuss. With a chance to put away the Colts, who frankly were begging to lose with their most penalties since 2016 and a missed PAT and field goal, the Broncos ran Phillip Lindsay into the pile for no gain. This is where Flacco's point gains steam. Staying on the ground to leave the Colts with as little time as possible made sense if they required a touchdown. They needed a field goal, the same requirement the Bears and Jaguars satisfied in walk-off wins over the Broncos earlier this season.

"I just look at it as we are now a 2-6 football team and we are afraid to go for it in a two-minute drill. I mean who cares if you give it back to them with 1:40 left. They obviously got the field goal anyway," Flacco said. "It's third-and-5 at the end of the game, who cares if they have a timeout left or not? Getting into field goal range isn't that tough. You are just putting your defense in bad situations. Why can't we be aggressive in these situations. What do we have lose."

Part of the issue is lacking talent. The Broncos don't have a deep threat -- they traded Emmanuel Sanders last week -- and struggled to protect Flacco when they did take shots down field. And no secondary option has emerged to complement Courtland Sutton as Noah Fant, Fred Brown and DaeSean Hamilton have made minimal impact.

Sunday, throwing to Sutton on the final drives made the most sense given his success in producing yards and penalties (five on Colts cornerback Rock Ya-Sin). In the end, Fangio leaned on his defense to make one more stop to finish the Colts off. It left the Broncos vulnerable as Jacoby Brissett went off script. Struggling for most of the afternoon, he twisted out of a sack attempt by Von Miller and made a scrambling throw to T.Y. Hilton, who somehow kept his feet in bounds. Those 35 yards followed by a horse collar tackle by Alexander Johnson left Adam Vinatieri to sink the Broncos with a 51-yard field goal.

The underwhelming offense is no longer Flacco's problem. He's out. Allen is up next with Lock, if fans get their wish, soon in the mix.

Chris Cross Trade?
The Broncos continue to listen when teams call about star cornerback Chris Harris Jr., but it remains less likely he's moved because of the asking price, per sources. Things can change quickly, but the market has shifted.

Philadelphia and Houston had strong interest last week, but Houston acquired a cornerback, and Philadelphia's defense finally lived up to expectations against the Bills. While there is no guarantee Harris will re-sign with Denver, creating the argument to trade him now rather than wait for a third-round compensatory pick, it is not that simple. The Broncos are frighteningly thin at the cornerback position, already using three players -- Duke Dawson, Devontae Harris, Coty Sensabaugh -- who were added after training camp. So if the Broncos don't get better than a third-round offer, they could keep him for good reason.

Harris wants to finish the season in Denver with his wife expecting the couple's fourth child this week.

From the trainer's table
Right tackle Ju'Wuan James, who tore his MCL in the season opener at Oakland, reinjured his left knee Sunday, and is not expected back anytime soon, though Fangio does not believe it is as bad as the original injury. That cost James six weeks. It has been a lost season for James. Signed as a free agent with $32 million in guaranteed money to help stabilize the offensive line, James has played 32 snaps, or roughly one half.

Dalton Risner (ankle) suffered an ankle injury when he was stepped on by a teammate in a pile on Sunday. He left Lucas Oil Stadium wearing a boot, but remains hopeful he will play Sunday against the Browns.