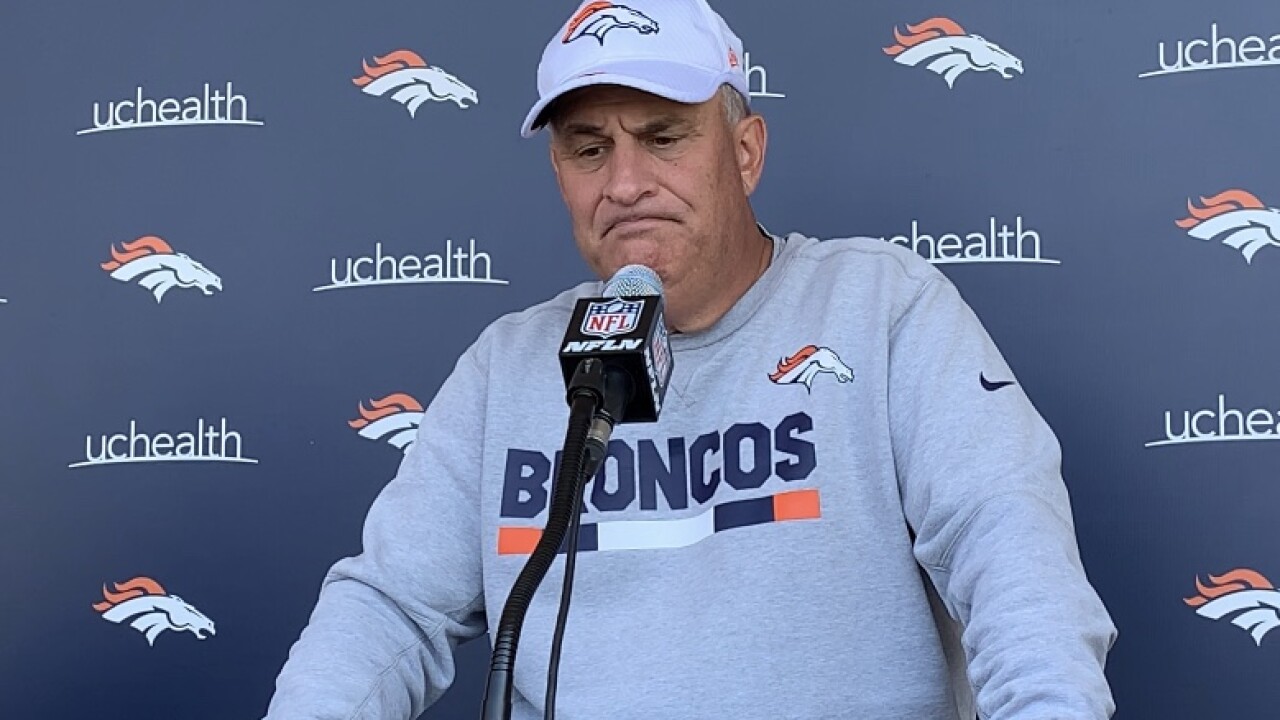 The on-again, off-again Broncos-Patriots' game is off again. The NFL announced that the game -- rescheduled last week for Monday at 3 p.m. -- has been postponed, with both teams counting this past week as a bye.

"This decision was made to ensure the health and safety of players, coaches and game day personnel and in consultation with medical experts," the NFL said in a statement after a fourth Patriots player tested positive Sunday for COVID-19.

The Broncos update scheduled: The Broncos play at New England this coming Sunday at 11 a..m since the Patriots were scheduled to have a bye. As a result, the Broncos-Dolphins game, set for Oct. 18 in Denver, has been set for Week 11 on Nov. 22 at 2:05 p.m., formerly Miami's bye. Then, Denver hosts the Chargers in Week 8 on Nov. 1 at 2:05 p.m., a week the Broncos were supposed to be idle.

All of this became necessary after the Patriots' three straight days of negative tests ended abruptly on Sunday.

Coach Vic Fangio addressed the latest postponement, saying he has told his players for months that they will need to "adapt and improvise."

"You get to see who the whiners are, who the bitchers are, and who can’t handle adversity, and I don’t want the Broncos to have to fall into that category," Fangio said. "All of this stuff will seem unfair when initially hit with it. You are going to ask why are we doing this? My message to them is that we were inconvenienced by this, but it could have been flipped around. ... We battle like hell on Sundays, but we are all in this together."

Broncos veteran Shelby Harris called the original decision to initially move the Patriots game to Monday, "complete B.S." He reflected the view of several players disappointed that the Broncos' schedule was adjusted despite having no positive tests. The Patriots have had four players test positive, including quarterback Cam Newton, Stephon Gilmore and practice squader Bill Murray. Both teams understandably had reservations about playing Sunday.

Broncos running back Melvin Gordon expressed his disappointment with the decision on Twitter. "Ain’t no way we practiced all week and they canceled our game. ... IM HOT ON GOD I AM."

A decision was made Sunday because the Broncos were scheduled to fly out this afternoon. And flying out on gameday for an East Coast contest was not realistic. The Patriots, according to reports, were reluctant to play Monday after holding a single walkthrough this week. The incubation period remains the donut hole in the NFL's plan, leaving players exposed despite multiple days of negative tests.

It is not fair for the Broncos to play the Patriots on this coming Sunday. They just had a bye week that included practicing all week. Harris and Justin Simmons expressed concern that the radical schedule shifts could increase the risk of injuries, which have plagued this season.

Fairness, however, is not a priority, playing the games is. Players only get paid if the games are played.

"When I promise my kids a reward, and one of them does something wrong, I don’t punish both for the actions of one. So why do we lose our bye week and replace it with a full week of practice?" Broncos linebacker Joe Jones tweeted, and then added. "And just to clarify, before anyone says something dumb... NO I am not blaming the Patriots for CV and all their cases. However, still don’t think we should suffer consequences for it."

Added Bradley Chubb, "Man we ain’t even do anything (wrong)."

If the Broncos play the Patriots this Sunday, as expected, it should help in one regard: quarterback Drew Lock would be expected to return after being sidelined the previous two games with a strained right rotator cuff. Fangio admitted Lock would have likely sat out Monday, but it's clear he's in line to start this Sunday, barring a setback.

"I don’t think he would’ve played if we played (Monday), although, in some ways, he could have. The extra week should help. We will see how he progresses the next 72 hours, see how much better he gets, and go from there," Fangio said.

The moved game could benefit the Patriots, too, with the extra days increasing the likelihood Newton and Gilmore will be available.

Starting left guard Dalton Risner told Denver7 he will remain positive and focus on what he can control.

"You know man it’s a crazy world we live in. It is what it is. Another week to prepare for a great opponent you know? Glass half full," he said.

Ultimately, the teams that get comfortable being uncomfortable will navigate this uncertainty well. But it remains a jarring proposition for players, especially when a team has not had a positive COVID-19 test.

“I think our players have done great. It’s been an inconvenience for everybody. Sometimes what you’re asking them to do, or not to do, seems trivial. Knock on wood, up to this point, we’ve been free of the virus," Fangio said. "Every sport has gone through their trials and tribulations and crowned a champion or they are about to. We can’t play doubleheaders, we can’t make a 9-inning game a 7-inning game, but we’ll get through it."

It’s a season of big sports events airing this fall on Denver7. Check out our upcoming schedule: