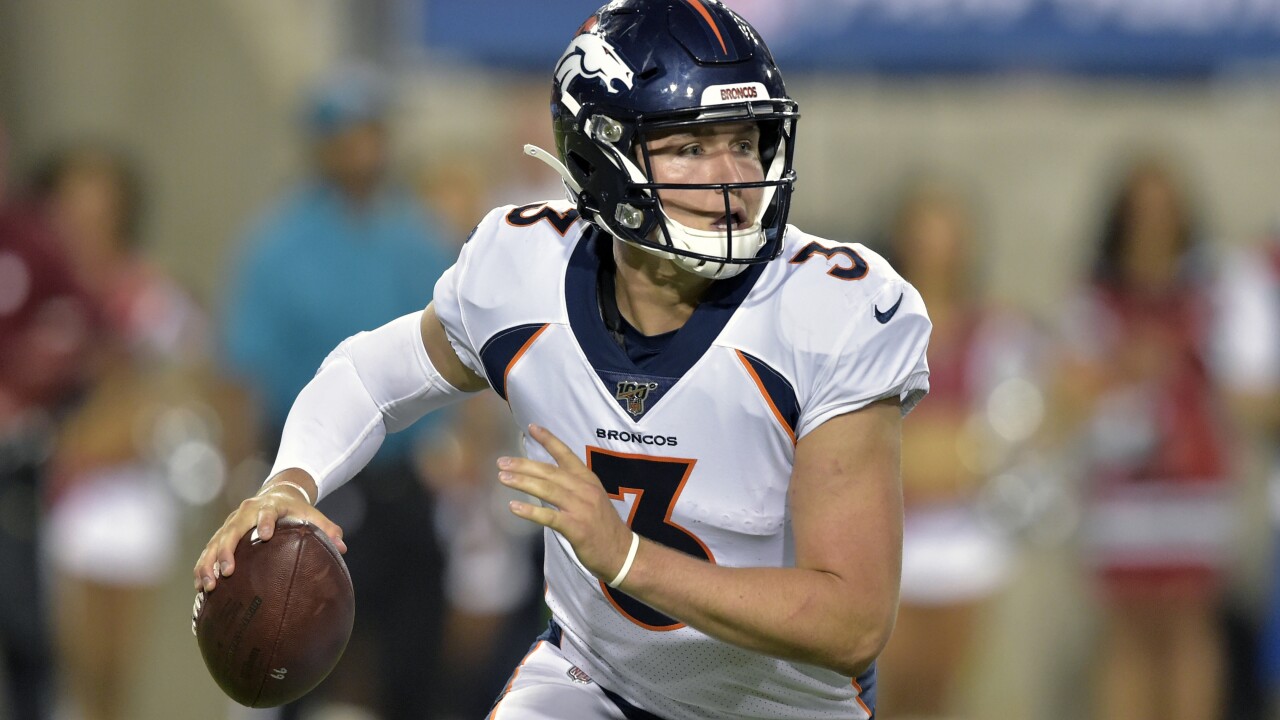 Copyright 2019 Scripps Media, Inc. All rights reserved. This material may not be published, broadcast, rewritten, or redistributed.
David Richard/AP
FILE - In this Aug. 1, 2019, file photo, Denver Broncos quarterback Drew Lock scrambles during the second half of the Pro Football Hall of Fame NFL preseason game against the Atlanta Falcons in Canton, Ohio. The Broncos are bringing rookie quarterback Lock back to practice Tuesday, Nov. 12, 2019, to see if he is going to be able to play this season. (AP Photo/David Richard, File) 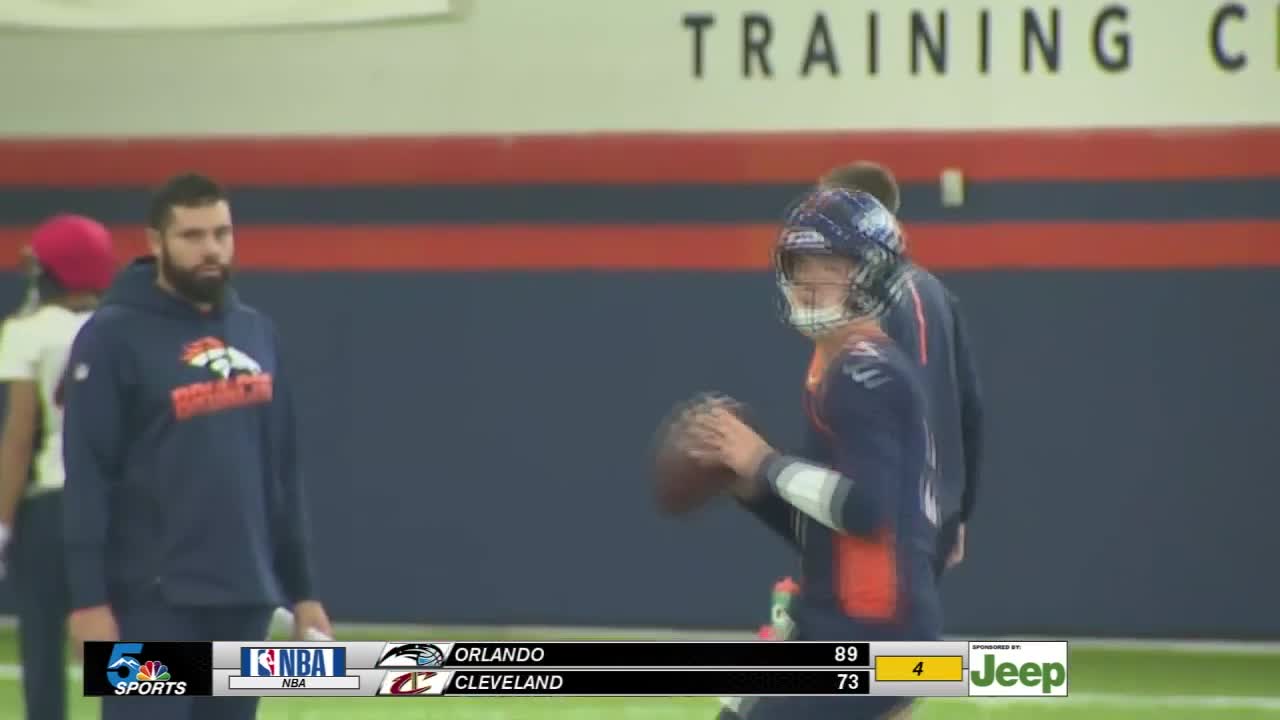 ENGLEWOOD, Colo — To QB or not QB? That remains the question for the Broncos.

Despite the team's worst offensive performance since 1992, including four yards passing in the second half, Vic Fangio did not name a starter Wednesday. But he offered hint, painting a picture where it appears it is rookie Drew Lock's job to lose.

"We will up Drew's reps this week significantly, three quarters (of the reps)," said Fangio. "I need to see him operate the offense, play his position well. All those things. I will (make the call) but I will talk to John and the coaches. I think he's ready to advance in his reps."

ADVERTISINGIt represents good news for Lock. He is firmly under consideration. Multiple players told Denver7 on Wednesday that if Lock does well in practice they expect him to start. Fans want Lock to play, and it is fair to wonder how many no-shows there would be Sunday if the Broncos stick with Allen.

General manager John Elway said during his weekly KOA Radio appearance that Brandon Allen, who was dismal against the Bills, and Lock will split reps in practice with a choice made later in the week. If Lock wins the job he would represent Denver's seventh starter since Peyton Manning retired following the 2015 season.

Wednesday, I asked Lock why he thinks he's ready.

"It gets to a point where I just can't take not doing anything anymore. That hit me about four weeks ago. I pushed through it a couple of weeks ago, and now I am getting to the point where I am a little antsy. For me actually thinking I am ready, that first week (of practice) was kind of a trial run to get my feet underneath me," Lock said. "That second week I was acting as if the next week I would be coming in and be ready to play. I felt good after that week. That if needed I could come in and compete and complete balls. That comes from how confident I am in in the base I have right now and the little things I have been working on."

Keeping Allen after his 1-2 record in three starts would represent a tough sell to Broncos Country, which is clamoring to see Lock, who was labeled the "future" at the position before the season. After winning his debut against the Browns, Allen has plummeted back to earth with a thud. Over his last six quarters, Allen has completed 20 of 47 passes, while leading the Broncos to six points. The Broncos' 134 net yards against the Bills marked their worst in 27 years. Allen was not the lone accomplice. The play-calling with passes outside the numbers proved suspect in the windy conditions, and the offensive line struggled with communication issues.

"We don't have guys in our quarterback room stabbing each other in the back. We are close," said Allen, who has handled an awkward situation professionally. "If Drew is in there, we will support him."

The case for keeping Allen in the cockpit is hard to make other than buying more time for Lock. He would only have nine practices before starting, while playing behind a leaky offensive line.

"Trust the coaches," said Lock when I asked about folks saying he hasn't had enough time. "Trust that they would know I am ready. ... I’m just going to go out there and be myself (if he starts). Just be what I’ve been to get me to this point and if that means making some plays when people might think I’m doing too much then so be it. That’s just who I am as a quarterback.”"

Lock must be activated by next Tuesday or remain shelved for the season.

Players have been impressed with Lock's improvement over the last three weeks in limited scout team and first-team reps. Lock won the backup job in preseason before spraining his right thumb on Aug. 19 in a scramble against San Francisco. He landed on the IR to start the season as the team claimed Allen off waivers to back up veteran Joe Flacco. Flacco's season ended against the Colts a month ago when he was diagnosed with a bulging disc in his neck. Whispers for Lock from fans began in earnest followed by roars this week following the offense's dreadful performance.

Lock told Denver7 he was rusty after missing 10 weeks of practice. But he admitted that after a couple of workouts he began to regain traction and adjust to game speed. Von Miller said Lock made a throw two weeks ago that was one of the best he's ever seen in practice. And Pro Bowl cornerback Chris Harris Jr. has taken notice.

"I like Drew. I'm excited to see him play whenever he gets an opportunity. I know everybody in Broncos Country is calling for him to play, but it's up to coach and Elway. I talked to Drew. He thinks he's ready," Pro Bowl cornerback Chris Harris Jr. said. "That’s good hearing that from the player. Just talking to him, it seems like he's confident. That's good."

He has opened some eyes. What sticks out?

"His arm strength. And his confidence. His confidence is through the roof," receiver Tim Patrick said. "He's going to be a baller for sure."

Added Courtland Sutton, "He's young. He's athletic. He has a big arm and he wants to learn. That's the biggest thing. He wants to continue to grow. That's all you can ask from a young guy stepping into this situation."

It appears it is Lock's job to lose. He has been preparing for this opportunity for weeks.

"He's confident. He's been in the system. He's been able to learn from both quarterbacks," said Phillip Lindsay, who stressed that the Broncos need to run the ball better to make it easier on the quarterback. "He's a talented young man. He's just needs to go out there and showcase it (if he starts)."