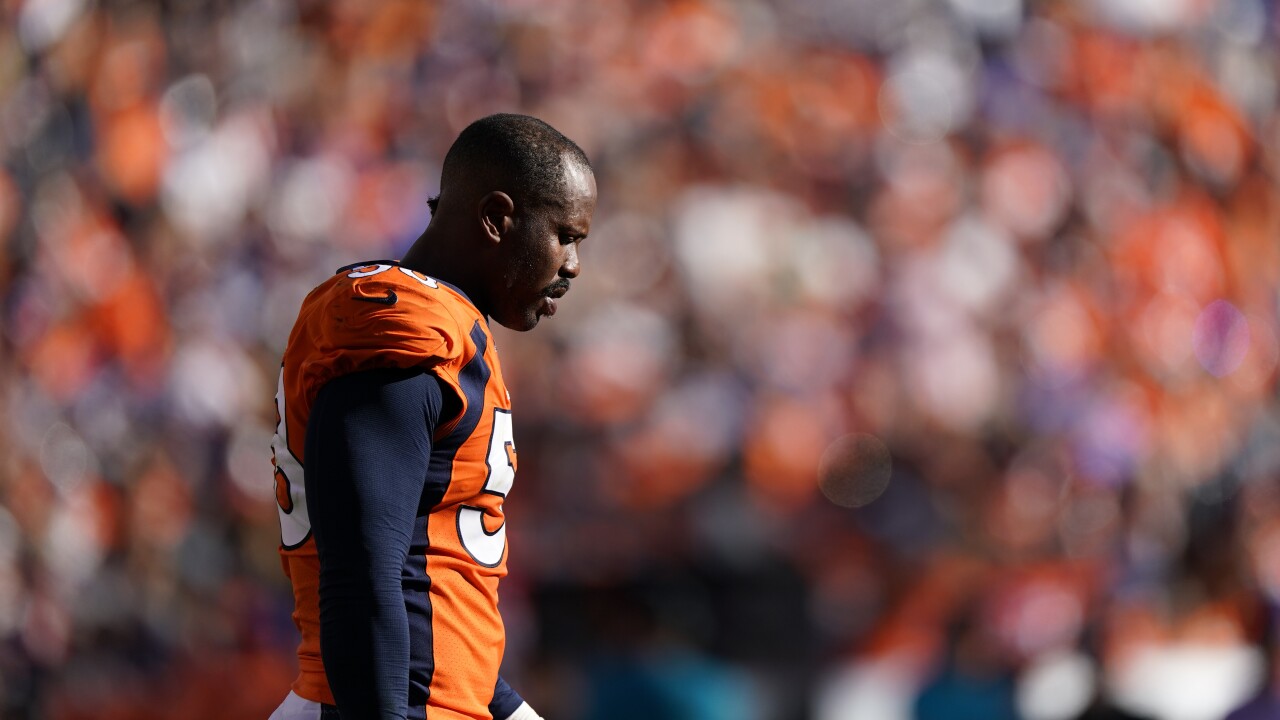 Jack Dempsey/AP
Denver Broncos outside linebacker Von Miller looks on during the second half of an NFL football game against the Jacksonville Jaguars, Sunday, Sept. 29, 2019, in Denver. (AP Photo/Jack Dempsey)

The Broncos (0-4) not only were victimized by a last-second field goal for the second time this season, but they blew a 14-point lead at home in a loss for the first time since 2006.

Gardner Minshew II drove the Jaguars, one of four AFC South teams who are 2-2, into field goal range after Joe Flacco’s 8-yard TD throw to Courtland Sutton with 1:38 left gave Denver a 24-23 lead.

Eerily reminiscent of their 16-14 loss to the Bears in Denver two weeks ago, the Broncos helped ignite the winning drive by getting whistled for roughing the passer.

Against Chicago, it was Bradley Chubb’s questionable penalty, which the league admitted was a bad call. Against the Jaguars, it was a flag by Von Miller, who reached up and struck Minshew in his neck just as he released his pass in a chaotic pocket.

Miller’s foul spoiled his big day in which he collected his 99th and 100th career sacks and drew several holding penalties, one of which wiped a Jaguars touchdown off the board.

Fournette topped his previous career high of 181 yards on Oct. 8, 2017, at Pittsburgh, and his big run Sunday was an 81-yarder that set up Jacksonville’s go-ahead score.

Jacksonville hadn’t had a 100-yard rusher in 22 games, the second-longest streak in the NFL behind Philadelphia’s 32-game drought.

The Jaguars also recorded their first takeaway of the season despite missing star cornerback Jalen Ramsey, who was deactivated and missed a game for the first time in his four-year NFL career. He missed practice all week, first with an illness, then a back injury and finally for paternity leave.

Denver led 17-6 and was driving for another score just before halftime when safety Ronnie Harrison intercepted Flacco, who airmailed a pass to Emmanuel Sanders. That set up Lambo’s second field goal, cutting Jacksonville’s deficit to 17-6 at the half.

Coming out of the break, the Jaguars employed a heavy front with 308-pounder Cedric Ogbuehi serving as an eligible receiver and extra blocker for Fournette.

The Jaguars went on a 75-yard, 16-play opening drive that ate up nearly 10½ minutes, which Minshew capped with a 7-yard TD toss to running back Ryquell Armstead after slipping two potential sacks and with Derek Wolfe and Miller bearing down on him.

Broncos ILB Josey Jewell aggravated a hamstring injury in the second quarter and was done for the day.