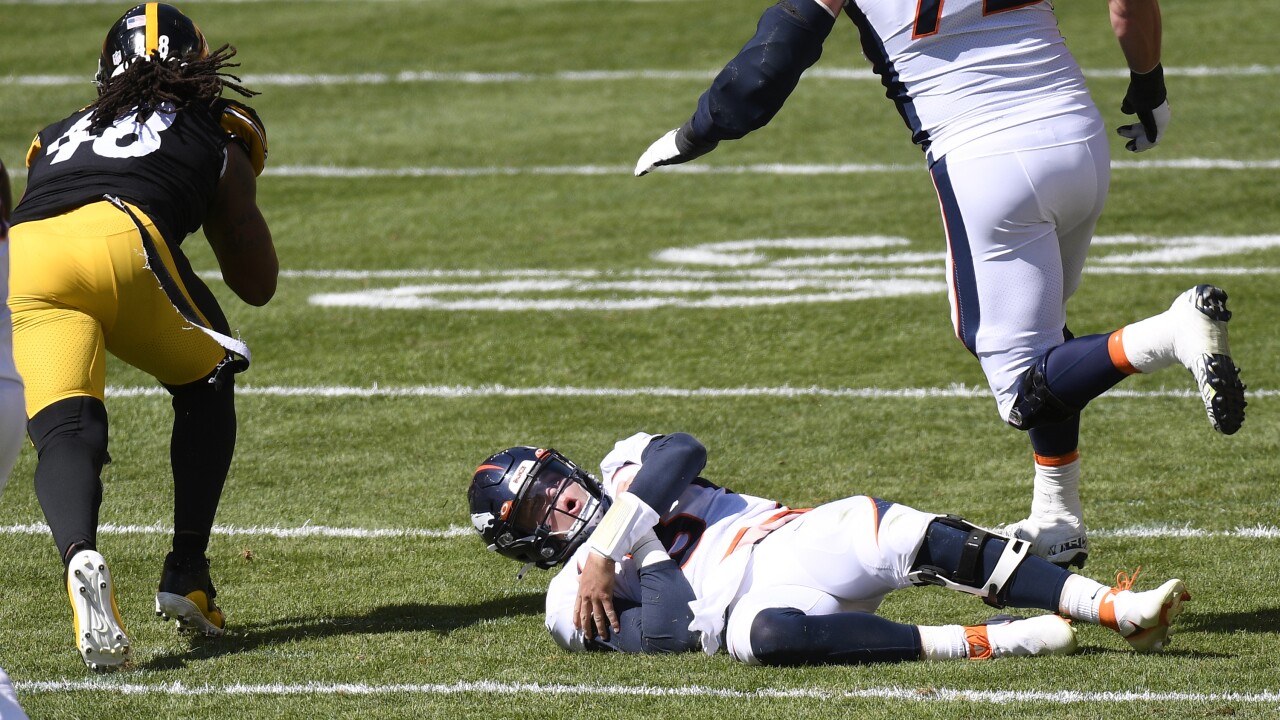 Keith Srakocic/AP
Denver Broncos quarterback Drew Lock (3) holds his arm after being injured while fumbling the ball during the first half of an NFL football game against the Pittsburgh Steelers, Sunday, Sept. 20, 2020, in Pittsburgh. (AP Photo/Keith Srakocic)

DENVER — A promising season has turned into a two-week grimace of pain and disappointment.

Quarterback Drew Lock joined the Broncos' high-profile list of injured players, hurting his right shoulder on a sack in the first quarter Sunday at Pittsburgh. He was listed as questionable to return after a lengthy exam on the sideline. He returned to the locker room, favoring his right shoulder.

On third-and-7 from the 25-yard line, Lock was flushed right as T.J. Watt burst into the backfield past tackle Elijah Wilkinson. As Lock scrambled, he stumbled and was smashed to ground by linebacker Bud Dupree, who was pursuing from the opposite side of the field. Lock grimaced in pain as the ball squirted loose for a Steelers recovery. The trainers walked with Lock to the sideline before he ultimately left the field. He was ruled out for the remainder of the game.

Jeff Driskel, signed this offseason, replaced Lock. He led a second-quarter scoring drive as the Broncos shaved Pittsburgh's lead to 7-3 with a 49-yard field goal from Brandon McManus with 12:07 remaining in the half.

For Lock, Sunday's play looked eerily similar to the preseason mishap against San Francisco in preseason a year ago. On that play, Lock lost his footing and fell awkwardly on his right thumb, sidelining him for 10 weeks. Quarterbacks can work through shoulder injuries, but this is complicated because it is his throwing arm.

The Broncos are 4-2 in Lock's six career starts. Until Dupree's hit, Lock had been sacked only five times in his last six games, the fewest in the NFL.

The NFL is about as sympathetic as a parking ticket when it comes to injuries. Opponents don't care. It has left the Broncos in a tough spot. Von Miller was lost for at least three months after dislocating his left ankle tendon, Phillip Lindsay sat out Sunday and is expected to miss the Tampa Bay game with a turf toe issue, and starting cornerback A.J. Bouye will not return until the season's fifth game with a shoulder issue