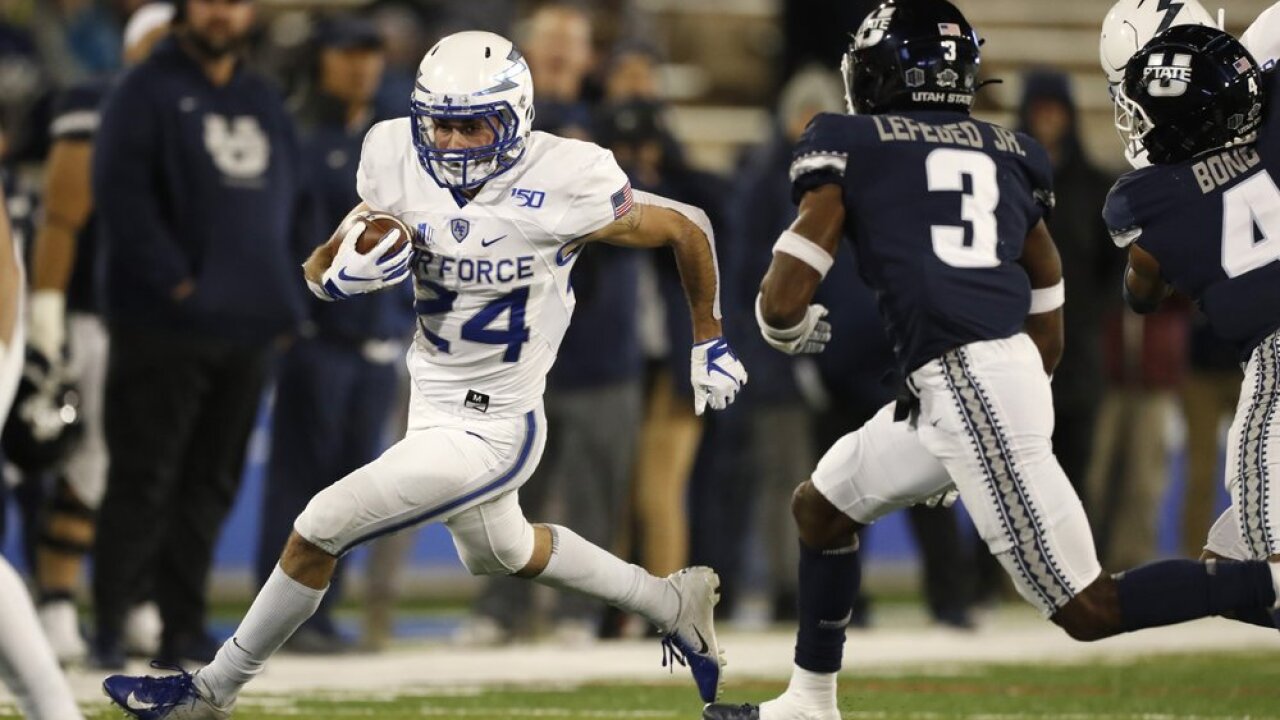 USAFA — Timothy Jackson has been at the forefront of Air Force’s punishing ground game.

Jackson ran for 148 yards and a touchdown, Kadin Remsberg added a pair of scoring runs and Air Force shut down Utah State 31-7 on Saturday night.

Jackson reached 100 yards for the third straight game to become the first Air Force running back to accomplish the feat since Cody Getz had three 100-yard rushing games in a row during the 2012 season.

“I just want to keep it going,” Jackson said. “It’s a testament to our offensive line, and our coaches, trusting in me to keep moving the rock. Even though we’ve been doing good every week, we’ve still got a lot to improve on, so we’re just trying to get better and better.”

Taven Birdow also had a touchdown run for Air Force (6-2, 4-1 Mountain West), which became bowl eligible after its third straight victory. Quarterback Donald Hammond III suffered a lower leg injury at the end of a run on the first play of the game but returned to play most of the game. He finished with 69 yards on nine carries and completed one of his five passes for 16 yards.

Jordan Love threw a 27-yard touchdown pass to Siaosi Mariner but Utah State (4-3, 3-1) could not avoid its first loss to a conference foe this season. Love finished 14 of 23 for 114 yards as the Aggies struggled to get their offense on track against the Falcons defense while the Utah State defense could not contain the Falcons’ relentless running attack.

“Our offense is kind of built for that, to hold on to the ball for a long time because all we do is run,” Jackson said. “With our defense holding them to really short gains and 3-and-outs, we’re going to get the ball a lot and have a lot of time of possession and it just wears down their defense at the same time, so everything kind of went according to plan.”

Trailing by 17 points, the Aggies got their first touchdown on Love’s 27-yard strike to Mariner, pulling Utah State to 17-7 early in the third quarter. But the Falcons, after downing a punt at the Aggies’ 1, held Utah State without a first down and forced a punt that traveled only 33 yards. Air Force went down the field, finishing the drive with a nine-yard TD run by Remsberg, his second scoring run of the night.

“We got beat by a better team,” Utah State coach Gary Anderson said. “No question about it. Air Force pretty much dominated both sides of the football. We knew they were a good team coming in. They showed they’re a good team.”

Slowed initially by losing two first-quarter fumbles, Air Force broke through to take a 17-0 lead at halftime, getting a career long 57-yard field goal from Jake Koehnke as time expired in the second quarter.

Jackson touched off the second quarter burst with a short touchdown run after igniting the Falcons’ first scoring drive with a 40-yard run on a third-and-8 play from Air Force’s 17. He also had a hand in Air Force’s second touchdown, with three rushes for 32 yards to set up a first-and goal at the 1 which Remsberg converted into another 1-yard touchdown run.

Utah State: The Aggies defense forced a pair of first-quarter fumbles but their offense could not capitalize on the early turnovers. The offense remained sluggish throughout the game, unable to sustain drives against the Falcons’ pressure tactics.