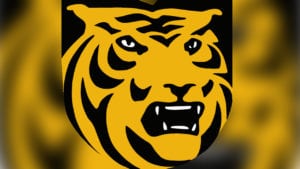 With the victory, the Tigers advance to the NCHC Frozen Faceoff for the first time in the six-year history of the league. CC will play top-ranked St. Cloud State in the semifinals at the Excel Center in St. Paul, Minn., on Friday, March 22, beginning at 4:08 p.m. (CT).

Berardinelli broke a 1-1 deadlock at the 5:16 mark of the final period with a blast from the right circle off assists from Westin Michaud and Ben Copeland. The Tigers were buzzing in the WMU zone and Michaud touched the puck to Berardinelli, who beat Trevor Gorsuch through his legs for his ninth goal of the season.

Gooch then made it a two-goal game just two minutes later when he deflected a pass from Bryan Yoon past Gorsuch at the 7:16 mark. Gooch won a faceoff four seconds earlier and Mason Bergh sent the puck to Yoon, who put it towards Gooch as he was soaring down the slot.

Austin Rueschhoff scored his second of the game with Gorsuch on the bench with 2:24 remaining to make it 3-2, but the Tigers held off the WMU rush with an extra skater for the final 2:07 of the contest.

“I can’ t tell you how proud I am of this team,” head coach Mike Haviland said. “We played a great third period. They got a late one, but we were not going to be denied.”

Michaud opened the scoring with a power-play goal with 3:13 remaining in the first period. He took a pass from Bergh, wheeled around the right circle then cut in front of the net and powered a shot past Gorsuch. Yoon collected an assist on the play as well.

“Michaud’s goal was beautiful, I thought he was going to go behind the net,” Haviland said.

The Tigers had some good looks in the second period to extend the lead, including two by Trey Bradley about 30 seconds apart. One was saved by Gorsuch on a 3-on-1 rush, and the second rang off the post.

The Broncos evened things up late in the middle period when Rueschhoff poked in a rebound after Josh Passolt was stopped by Leclerc on a wraparound attempt with 1:11 left in the frame.

The Tigers held the Western Michigan power play off the board for the third consecutive game, killing all three penalties on Monday. The Broncos outshot CC, 34-25 and Gorsuch finished with 25 saves.

“It was an unbelievable hockey game tonight,” Haviland said. “We played extremely hard and we are going to enjoy this one.”