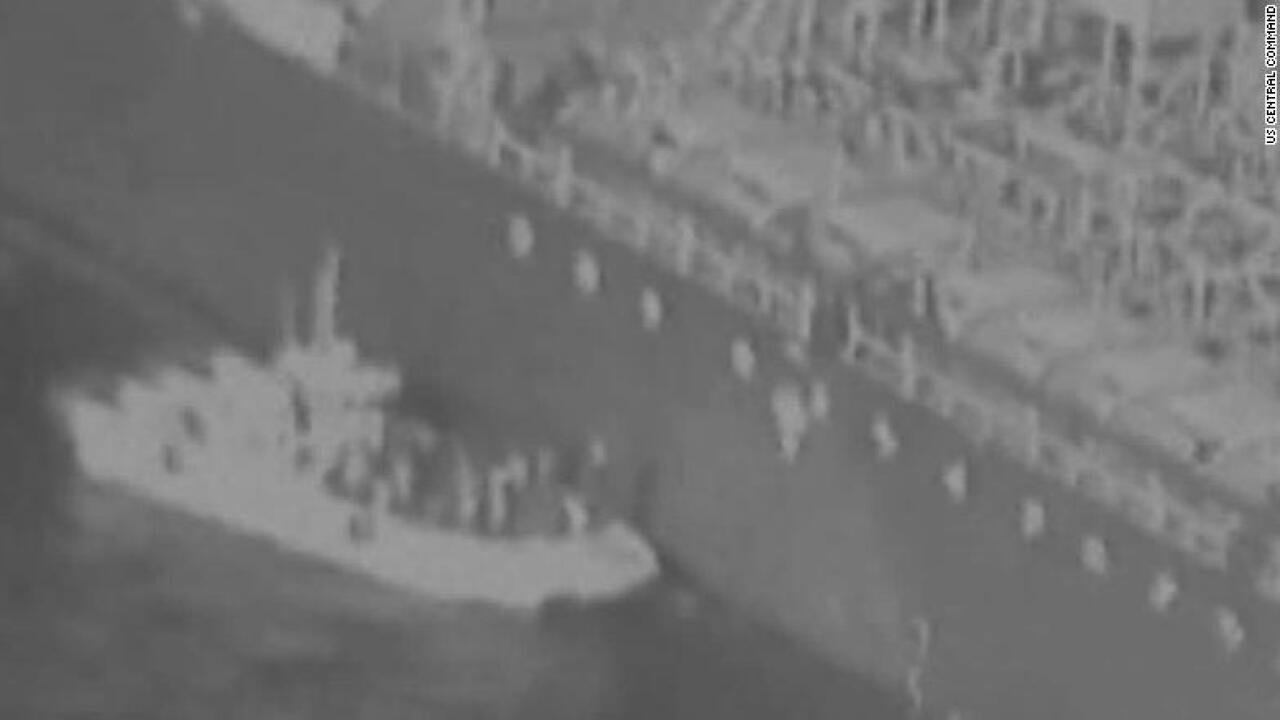 The United States has blamed Iran for an attack on two tankers in the Gulf of Oman , releasing video footage that it claims shows an Iranian patrol boat removing an unexploded mine from one of the vessels' hulls.

The Kokura Courageous and Front Altair tankers were attacked in international waters Thursday, prompting the evacuation of both vessels and raising fears of further confrontation in one of the world's most strategic shipping lanes at a time of high tensions between the US and Iran.

The explosions, which sparked a fire on at least one of the two ships, are still under investigation. US Secretary of State Mike Pompeo blamed Iran for the incident, citing intelligence assessments, the weapons used, the level of expertise required and the similarity to other recent attacks.

On Thursday night, US Central Command released a video which it said shows Iranian sailors removing a mine from the Kokura Courageous' hull.

In the video, a smaller boat is shown coming up to the side of the Japanese-owned tanker. An individual stands up on the bow of the boat and can be seen removing an object from the tanker's hull. The US says that object is likely an unexploded mine.

"Iran did do it, and you know they did it because you saw the boat," President Donald Trump said during a phone interview on Fox and Friends Friday morning, referring to the video.

A senior diplomatic source of a US ally told CNN Friday, "It is a virtual certainty Iran was behind this latest attack. The video now nails it."

The source added that the goal of the response from the US government thus far is all about publicly exposing Iranian actions and intensifying maximum pressure.

After the United States withdrew from the Iran nuclear deal, adopted a policy of maximum economic pressure and sent a carrier group to the region, the source said this "Iranian retaliation is designed to show they can disrupt, and push oil prices up."

The Trump administration predicted that the pressure from the United States would bring Iran to the negotiating table, but European leaders disagreed, believing it would empower the hardliners, the source continued.

Iran has denied any involvement in the incident, with its foreign minister suggesting that the US was quick to make allegations "without a shred of evidence."

On Friday, the president of the Japanese shipping company that owns the Kokuka Courageous held a press conference in Tokyo, in which he denied that a mine had been used in the tanker attack.

The President of Kokuka Sangyo Marine, Yutaka Katada, said he believed there was "no possibility of mine attack" owing to the attack being "well above the naval line."

Katada said he had not seen the images released by the US military, but referenced the account of a crew member who witnessed the second blast and saw a "flying object."

The International Association of Independent Tanker Owners (Intertanko) said the vessels were hit "at or below the waterline, in close proximity to the engine room," and added that the attacks "appeared to be well-planned and coordinated."

Another of US official told CNN that multiple Iranian small boats have entered the area where the USS Bainbridge continues to be on the scene, prompting US Central Command to issue a statement saying, "No interference with USS Bainbridge, or its mission, will be tolerated."

The attack could provide more fodder for Iran hawks within the US administration, whose recent Iran saber-rattling has frustrated President Donald Trump. One of them, national security adviser John Bolton, announced last month that the Pentagon was deploying the USS Abraham Lincoln Carrier Strike Group and a bomber task force to the Middle East in response to a "number of troubling and escalatory indications and warnings" from Iran.

The two tankers -- one carrying oil and the other transporting chemicals -- were attacked near the strategically important Strait of Hormuz, a vital shipping route that has been the focal point of regional tensions for decades. Roughly 30% of the world's sea-borne crude oil passes through the strategic choke point, making it a flashpoint for political and economic friction.

Jonathan Cohen, acting US ambassador to the United Nations, said Thursday that he echoed Pompeo's comments in a private meeting of the UN Security Council, describing the attack as "another example of Iran's destabilizing activities in the region."

The Iranian mission to the UN rejected the US' claim.

Alireza Miryousefi, a spokesman for the Iranian mission, tweeted a statement saying Iran "categorically rejects the US unfounded claim" that Iran is behind the attacks and "condemns it in the strongest possible terms."

He added that Iran "expresses concern" over the "suspicious incidents." And he called it "ironic" that the US, which withdrew from the nuclear deal with Iran, the Joint Comprehensive Plan of Action, is now calling Iran to come back for negotiations and diplomacy.

Following the attack, Iran's foreign minister, Mohammad Javad Zarif, said "suspicious doesn't begin to describe" this latest incident, noting that one of the tankers is Japanese owned and the attack took place as Japanese Prime Minister Shinzo Abe was visiting Iran in an effort to calm tensions between Washington and Tehran.

After Khamenei met with with Abe, who was in Tehran on a visit widely viewed as an attempt to moderate US-Iran tensions, Iran's Supreme Leader tweeted that he does not "consider Trump as a person deserving to exchange messages with; I have no response for him & will not answer him."

Trump appeared to weigh in on Twitter, saying: "While I very much appreciate P.M. Abe going to Iran to meet with Ayatollah Ali Khamenei, I personally feel that it is too soon to even think about making a deal. They are not ready, and neither are we!"

Thursday's incident follows attacks on four oil tankers in the United Arab Emirates' port of Fujairah in May. The US and Saudi Arabia suspect Iran was behind those attacks -- though no evidence of its involvement has been presented. Tehran denied any involvement, and precisely who carried it out is still under investigation.

Initial findings from an international investigation of the attack last month concluded that a "state actor" was the most likely culprit.

The UAE, Saudi Arabia and Norway told the UN Security Council last week that there are "strong indications that last month's attacks were part of a sophisticated and coordinated operation carried out with significant operational capacity."

On Friday, a UK intelligence source told CNN that Britain had "no doubts" over the validity of the video released by the US Central Command. When asked about the remarks from Pompeo blaming Iran for the attack, Maja Kocijančič, a spokeswoman for the European Union, said Friday that the EU was still "gathering more information."

"We have said repeatedly that the region doesn't need further de-escalation it does need destabilization does need further tension and therefore we call for maximum restraint and to avoid provocations," Kocijančič said.

This story has been updated.