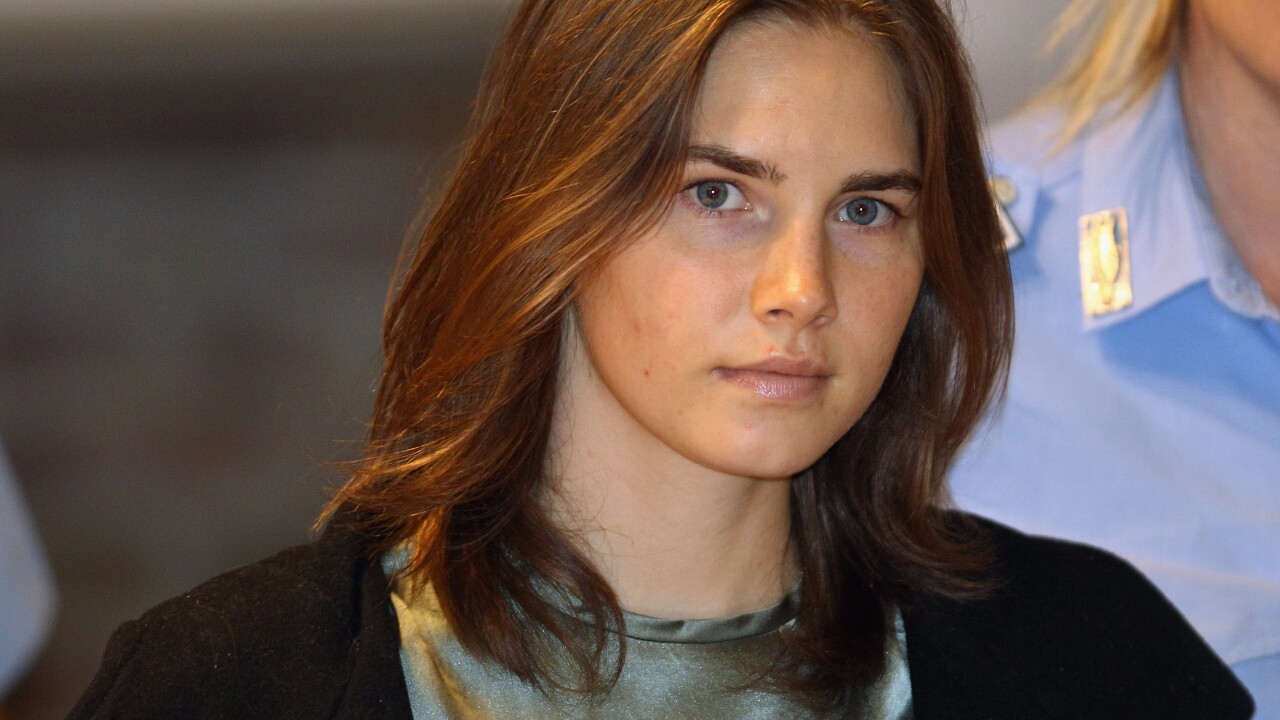 Amanda Knox has set foot in Italy for the first time since being released from prison in 2011, following her acquittal over the murder of British student Meredith Kercher.

Knox is in the country as a guest speaker for a panel session -- titled "Trial by Media" -- at the Criminal Justice Festival in Modena, northern Italy, on Saturday. The event is organized by non-profit legal group, the Italy Innocence Project.

The 31-year-old American's sensational murder case gripped the world's media for years. She was convicted of the murder of fellow student Kercher in the Italian town of Perugia in 2007, spending four years in prison before being acquitted and released in 2011.

Hours before setting off from her home in Seattle, Knox posted an image on Instagram with her fiance, novelist Christopher Robinson. "Here we go... Wish us, 'Buon viaggio!'" she wrote.

Robinson, who appears to be traveling with Knox, said in a tweet that, "Last time I was in Italy, I took a train to Florence, blew my money on a 100€ bottle of barolo which I drank by myself while writing a bad short story.

"This time with @amandaknox is going to be, shall we say...different."

I was painted as a 'sex-crazed femme fatale'

Ahead of her return to Italy, Knox revealed she was "feeling frayed" in another Instagram post. In the photo, Knox seemingly hangs from a cliff edge, accompanied by the caption, "3 Days till I return to Italy for the first time since leaving prison.

"Feeling frayed, so I made my own inspirational workplace poster. 'Hang in there!' Just imagine I'm a kitten."

In an essay published on her Medium account , on Wednesday, Knox also spoke of the intense media scrutiny of her case, having last fled Italy "in a high-speed chase, paparazzi literally ramming the back of my stepdad's rental car."

"Thrust into the spotlight against my will in 2007, the year of the iPhone and the takeoff of Twitter and Facebook, the most intimate details of my life -- from my sexual history to my thoughts of death and suicide in prison -- were taken from my private diary and leaked to the media," she wrote.

Knox said that while on trial "for a murder I didn't commit," the prosecutor "painted me as a sex-crazed femme fatale, and the media profited for years by sensationalizing an already sensational and utterly unjustified story.

"It's on us to stop making and stop consuming such irresponsible media," she said.

Guido Sola, one of the festival's organizers, told CNN that Knox "is the icon of trials that the media carry out before the trial in court is conducted.

"Amanda has been definitively acquitted in court, but in the popular imagination she is still guilty, because she has been the victim of a barbaric media trial."

In 2007, Knox was arrested alongside her then-boyfriend, Raffaele Sollecito, after the murder of her housemate, Kercher, 21. Kercher's body was found in the apartment she shared with Knox. Her throat had been slashed.

Another man, Rudy Guede, was arrested and convicted separately of Kercher's murder; he is currently serving a 16-year prison sentence.

Prosecutors continued to insist on Knox and Sollecito's involvement, however, accusing Knox of delivering the fatal blow.