Squatters take over veteran's house; Family forced to live in hotel for 5 months 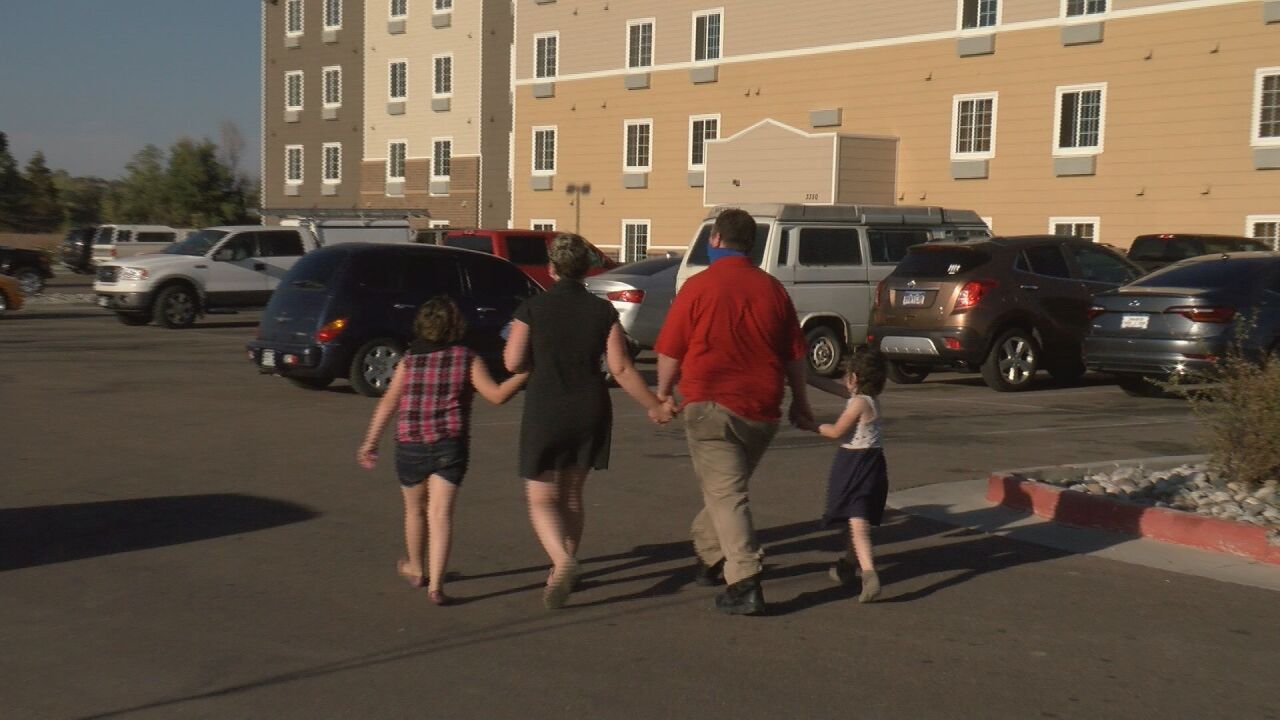 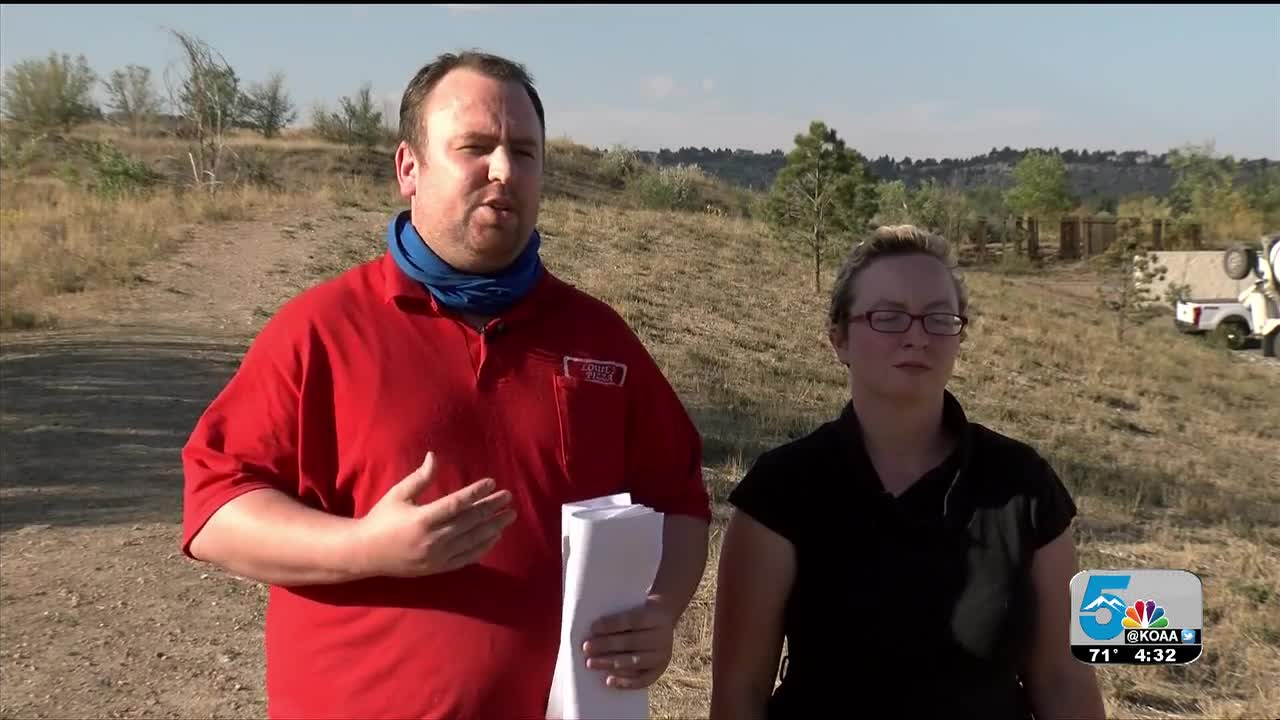 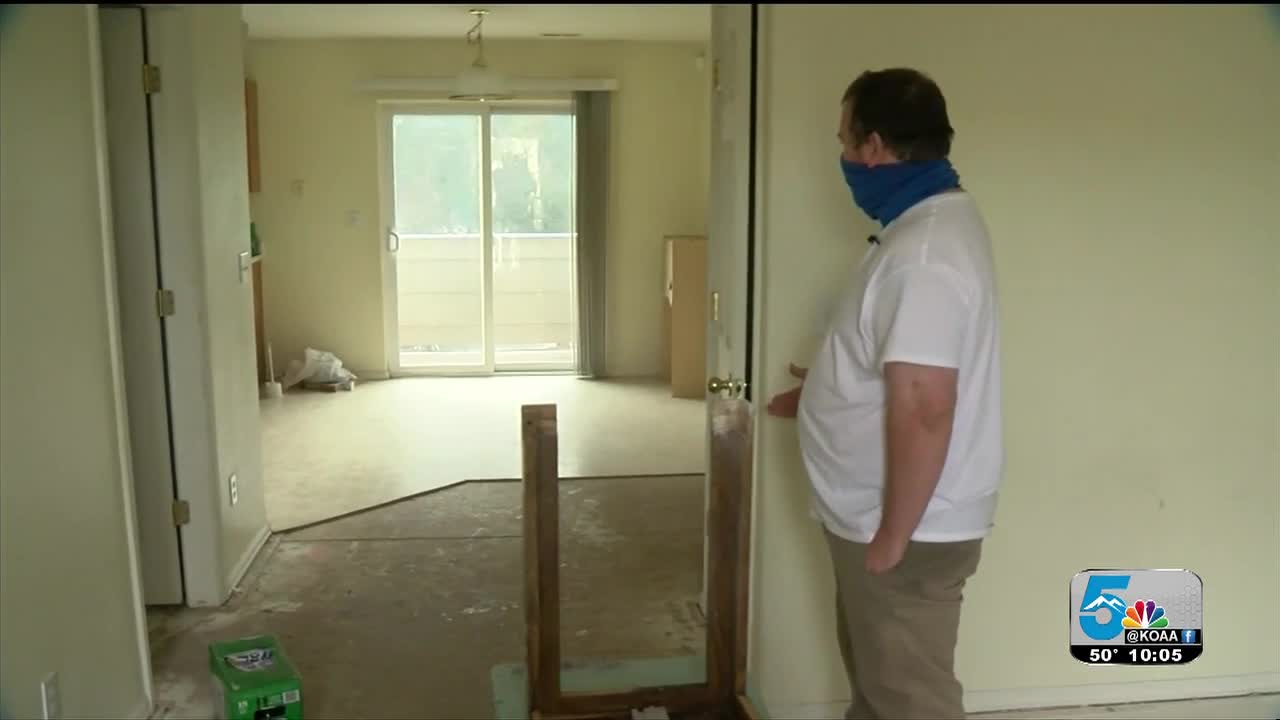 COLORADO SPRINGS — A disabled veteran and his family are forced to live in a hotel after squatters moved into their condominium and changed the locks.

In 2018, News 5 Investigates worked with lawmakers to pass legislation that was supposed to protect homeowners from situations like this, but it appears some law enforcement officials and court clerks aren't familiar with Senate Bill 15.

"Currently we are outside this hotel because there are individuals inside my home that have decided that it's theirs," Peter Dover said.

Peter, his wife, Leah, and two children are staying at the Woodspring Hotel as they figure out how to get squatters out of their 2-bedroom condo on the southeast side of Colorado Springs.

You're probably wondering how squatters got inside in the first place?

Earlier this year, Peter says he left the state to be with his mother who unfortunately passed away from cancer in February.

His children were staying with his mother-in-law out-of-state as well.

The condo, located in the 4900 block of Leland Pt. wasn't being lived in full-time, although their personal belongings remained inside.

At one point, Peter considered selling the property and moving, but ultimately decided to keep it and do some spring cleaning.

"We wanted to get the house decluttered," he said. "Really we wanted to make it a better place for the kids and make sure they had a good home."

The family turned to a woman named Lisa Marie-Coleman for help. They say they hired her as a "professional organizer" and packer.

"We had a lot of boxes and a lot of stuff in the condo," he said. "We hired her to help us pack and to help us move those items from our condo to our storage unit near Airport and Academy."

While Lisa did move their stuff out, that's not all Peter and his wife accuse her of doing. They tell News 5 that Marie-Coleman decided to move her stuff in and live in their condo.

"I got a call from my wife because she had been out of town and she let me know they decided to move our stuff out, minus a few clothing items and moved their stuff in," Peter said. "I called CSPD to see what I could do about it but by that time, they had been there 2-3 days and had established what they (police) said was residency and there was nothing I could do about it except going through an eviction."

Chief Investigative Reporter Eric Ross asked, "So at this point you have no access to your condo?"

"Correct," Peter said. "They are living in our home for free while me and my children and wife are living in hotels and bouncing from hotel to hotel."

Notice that peter used the word "they" instead of "she" when referencing Marie-Coleman, the original person hired to provide cleaning and organizational services.

Through court records, News 5 Investigates identified at least two other squatters living in the home who have no connection to this family.

Peter questions why the justice system couldn't help him through this process in getting his home back.

"We have great trust in law enforcement but at this point in time, when do I receive the protection that these people are getting?"

Ross followed up by asking, "So you're positive that these people never had a lease or permission to live in this house?"

"Not once," Peter said. "Our words fell on deaf ears."

Ross asked, "At any point in time, did law enforcement tell you that a few years ago a squatter bill passed and here's what you need to do to expedite the process through the court system to get these people out?"

"No," Peter said. "They told me that I needed to evict them and that it's a landlord-tenant situation."

The information Peter says he was given appears to be inaccurate.

In 2018, News 5, alongside lawmakers, worked to pass Senate Bill 15---which is supposed to expedite the eviction process.

While standard landlord-tenant evictions have been in part, delayed due to the Coronavirus pandemic, squatter evictions are supposed to be heard in court the very next day proper paperwork is filed. It no longer follows the same standard eviction process.

However, eviction turnaround times for squatting situations can vary depending upon the day you file paperwork. For example, if you go to the courthouse on a Friday, a hearing may not occur until Monday and then once a Writ of Restitution is issued, it goes onto the sheriff's office to execute the eviction.

While these cases can take anywhere from 24-72 hours to cycle through the system, it should not take several months.

If you are dealing with squatters who do not have a rental agreement or permission to occupy a residence, you should advise the courts that you would like to request an emergency hearing for a squatter eviction case. It's always best to make this statement crystal clear with the court clerk so that you can obtain the appropriate required documents needed to file your case correctly.

Peter and his wife tell News 5 that no one told them about the squatter bill.

The first time they heard about it was from Chief Investigative Reporter Eric Ross.

Meanwhile, veterans organizations have assisted with paying for temporary housing in hotels for the family, but it's not a permanent solution.

Peter and his wife say they both work at Louie's Pizza to keep their mortgage paid and put food on the table.

They say they don't understand how something like this could happen to them and are worried about the financial mess they'll eventually encounter.

"We should be able to go home and be safe at home," Peter's wife, Leah, said. "We shouldn't have to struggle working 6-7 days a week trying to make sure that there's a roof over our head every night (in hotels). We haven't been able to eat properly or cook."

Peter initially attempted to get a protection order against the squatters to hopefully get them to vacate his condo peacefully.

Unfortunately, that was not the appropriate paperwork needed for an eviction and the squatters didn't leave.

"I don't know what to do anymore except give up our home and she (my wife) decided to give it one more go around and fight and see if there was anybody willing to hear us and that was you," Peter said.

After News 5 advised the family what they needed to do to get the squatters out, they went back to court to file appropriate eviction paperwork.

The case was handled and processed within 24 hours, as the squatter bill requests.

It's unclear why this information was not initially passed on to the family earlier in the year.

The squatters have left voluntarily, but the house needs some work.

Pictures show the house cleared out except for some trash, beer bottles, and a broken dresser that Peter and his wife say is not theirs.

A sleeping mat was also found in the living room with a pillow---likely from one of the squatters.

The family does have clothing, but is in-need of some furniture and mattresses for their two children.

News 5 has made calls to several organizations to see what assistance may be available for the family and we will provide an update as we get new information.

Meanwhile, we requested records from the Colorado Springs Police Department to better understand how this case was handled. As soon as we get that data, we will update our story accordingly.

To review a copy of Squatter Bill (SB-15), click here.

Do you have a problem or issue you'd like Chief Investigative Reporter Eric Ross to look into? You can send an email any time to Eric.Ross@KOAA.com or News5Investigates@KOAA.com.

Disclaimer: None of the identified squatters have been arrested or charged with any crime. A message to Marie-Coleman was not returned before the original publication of this article.

Response from Lisa Marie-Coleman:
After our original broadcast, Lisa Marie-Coleman contacted KOAA 5 with additional information. She wanted to clear her name from the squatting situation and says she did not damage or destroy the house in any way.

She tells News 5 that she vacated the property in July and left for Illinois to care for her father.

As of the beginning of October, court records showed at least two squatters remained on the property. The first was a man named James Gregory. The second was a man named Andrew Bigelow.

Coleman denies changing the locks on the family and a friend of Coleman's alleges it was Andrew and James who changed the locks and damaged the house.

However, Coleman tells us that she had no idea her brother and Andrew had been living in the condo after she departed in July. She also says she has not had contact with her brother in quite some time.