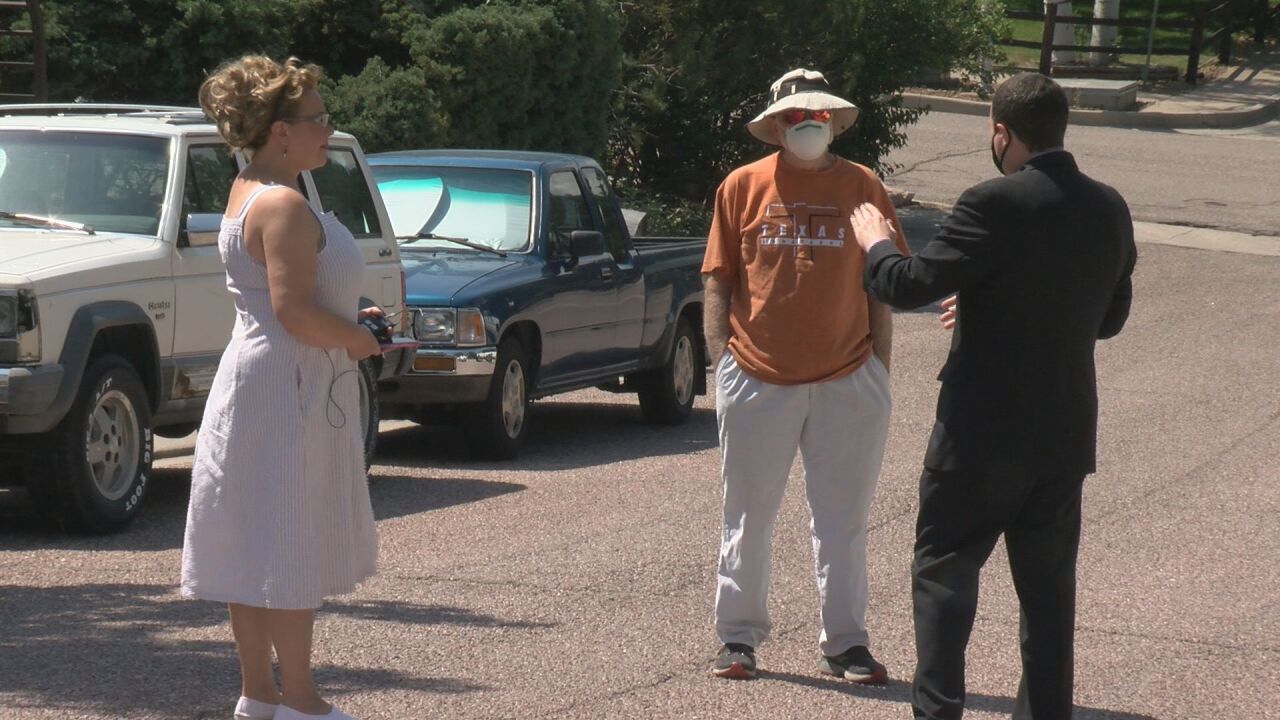 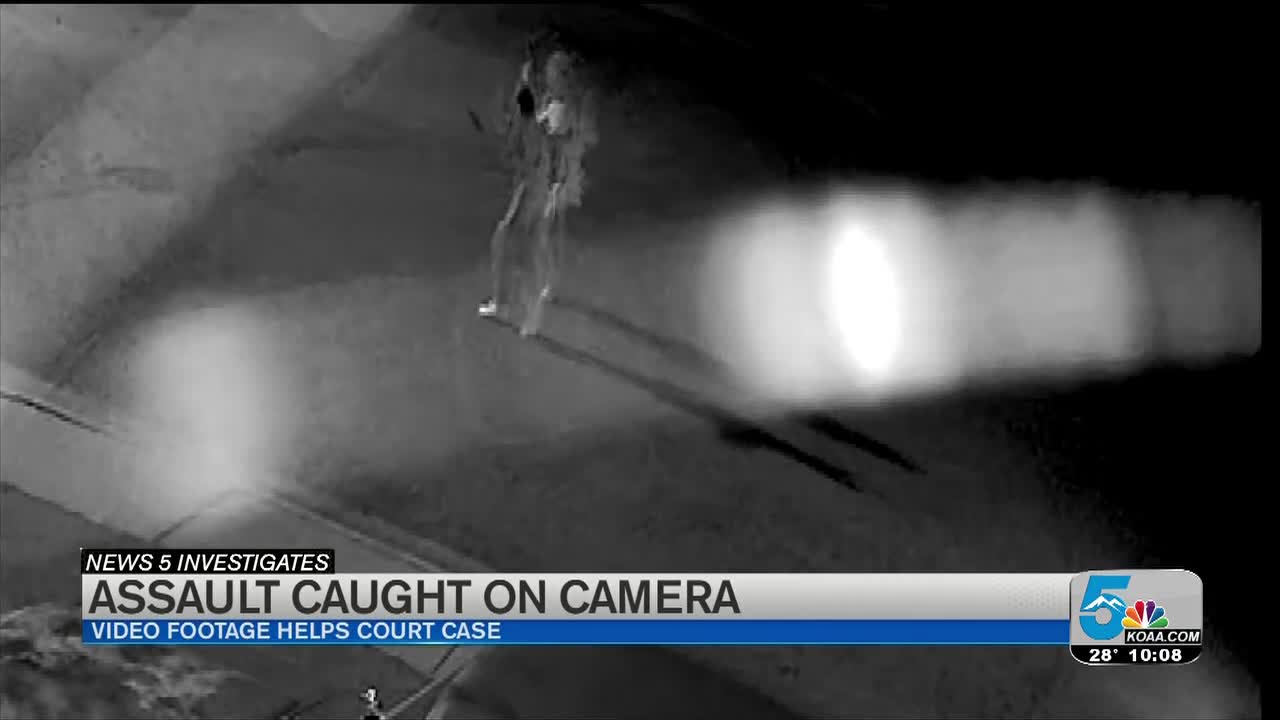 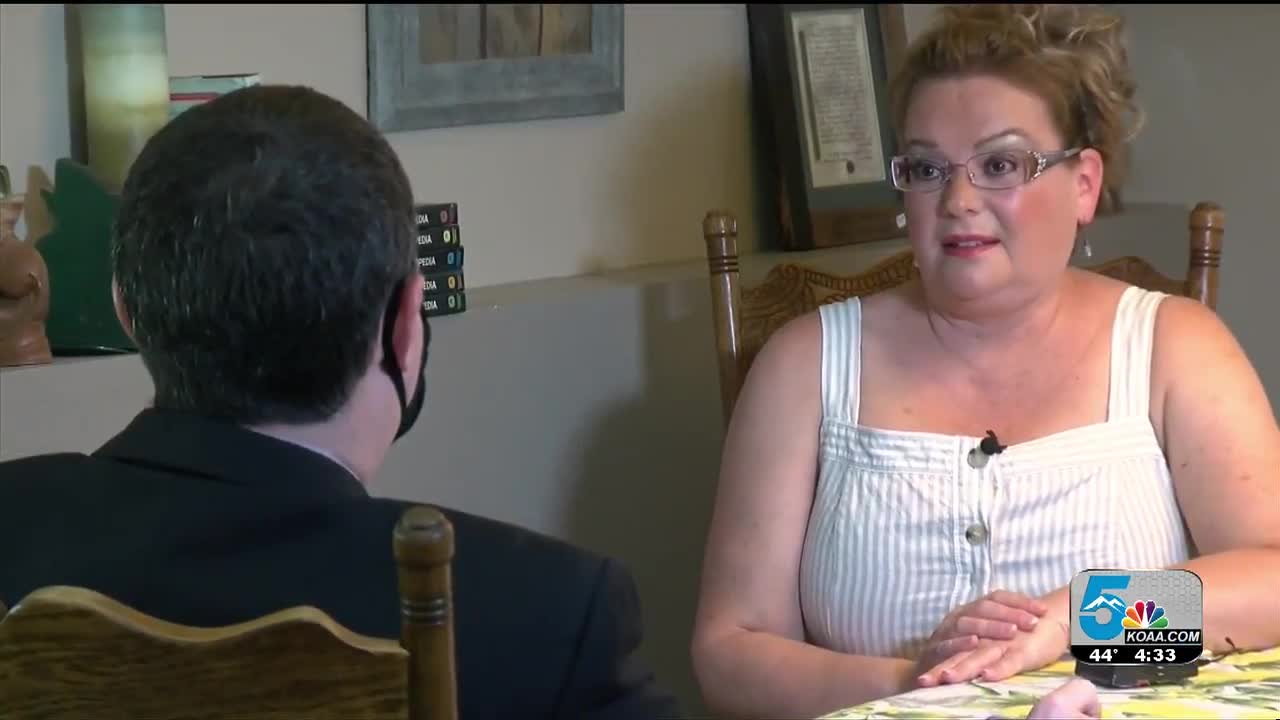 COLORADO SPRINGS — A Colorado Springs homeowner was assaulted outside her house.

Her neighbor came to the rescue and held the alleged attacker at gun point until police arrived.

It may sound like a classic "neighbors looking out for neighbors" story, but that's not how police saw it.

While the alleged attacker was criminally charged with disorderly conduct, the assault victim who took multiple punches was also charged with being disorderly.

Meanwhile, the neighbor who held the alleged attacker at gunpoint was charged with felony menacing.

Surveillance video obtained by News 5 Investigates ended up being a key piece of evidence to help clear their names in court.

Back in May, surveillance video footage shows a suspicious white sedan at 5 a.m. during up and down Lisa Floyd's street.

Video shows the car going up the road, then in reverse. Moments later, another camera angle captures the same white sedan parking in front of a neighbor's mail box.

The driver in the car gets out for a few moments and then gets back in. However, the footage is too grainy to uncover what the driver was doing.

Lisa says she was awakened by loud car noise, so she grabbed her phone and went outside to see what was going on.

"I said, 'what are you doing,' Floyd recalled asking the suspicious driver. "She said she was delivering mail and it's none of my (expletive) business. I said it's 5 a.m. and this has been going on since 3:30."

Lisa says she threatened to call police if the woman didn't leave the neighborhood.

"I walked around (to the back of the car) and went to take a picture (of the license plate)," Lisa said. "She jumped out of her car and began hitting me."

Camera footage shows as Lisa goes around the back of the sedan, a woman, later identified as Nuhiya Smith, gets out to confront Lisa.

"She had knocked off my glasses and my phone," Lisa said.

During the attack, Smith didn't put her car in park which ended up rolling down a hill and hitting two other vehicles.

"I was just assaulted by some girl out here in a car saying she was delivering (mail)," Lisa told the 9-1-1 call taker. "Now she hit another car."

The noise woke up Lisa's next door neighbor, Larry.

He says he came outside with a World War II handgun and saw Lisa in the middle of the street asking for help while Smith had made it back to her car.

"The lights come on, the engine started and she was backing out," Larry told News 5. "That's when I put the gun up to the window and said get the keys out of the ignition an get out of the car because Lisa had called down to me at the top of the hill telling me not to let her leave and that she had been assaulted. I had no idea whether she had been knifed, shot, I didn't know what was going on. I thought I had done well."

However, police did not believe Larry's actions were appropriate.

Larry, a senior citizen with no criminal history was ultimately charged with felony menacing.

"We were unaware of the video at that time," Colorado Springs Police Lt. Jim Sokolik said.

At the time charges were filed, police say they did not have the surveillance video that we had.

Instead, officers made charging decisions based on each person's account of what unfolded on the street.

"The officer is doing the best they can at the point in time with the information they have to make that determination about probable cause," Lt. Sokolik said in a September 2020 interview. "They are not the jury. That's really what the court system is for. If you get arrested and you feel you were arrested incorrectly, that's where the court is for to explain it."

Lt. Sokolik also explained that once someone is arrested and charged with a crime, police can't just drop a case.

However, News 5 did make sure both the DA's Office and CSPD had access to the same video footage that we obtained.

Two months after our original story on this case aired, we learned the DA's Office filed a motion to dismiss charges against Larry and Lisa.

We caught up with them after their court appearances.

"We had to raise a fuss thanks to the Channel 5 coverage and my lawyer to even get the videotape to the DA to see it or this whole thing would have proceeded right down the road without the security footage which made all the difference in the world," Larry said.

While Larry is now "free", the case has taken a financial strain on his wallet. He says he's had to pay thousands of dollars in attorney's fees and court costs.

Lisa is also glad that her case was dismissed, but is upset she has to pay $65 if she wants the record of her arrest to be permanently sealed.

"There was no one holding them accountable except for you and questioning them what was going on," Lisa said. "You, Eric, have been great. You've stayed on it and you've kept in contact. Just knowing that someone was hearing us and was hearing the truth was a huge weight lifted off and a comfort to just know that somebody was looking out for us."

Nuhiya Smith has a pre-trial readiness conference scheduled for February 2021.

The car Smith was driving at the time of the assault and accident was not insured and Lisa's neighbor has had a hard time getting Smith to pay for damages.

Smith put down insurance information on an accident report, but it was later determined to be bogus.

Police said that it would be up to the 4th Judicial District Attorney's Office to file additional charges pertaining to the insurance issue.

If you have a news tip for our investigative unit, send an email to News5Investigates@KOAA.com.