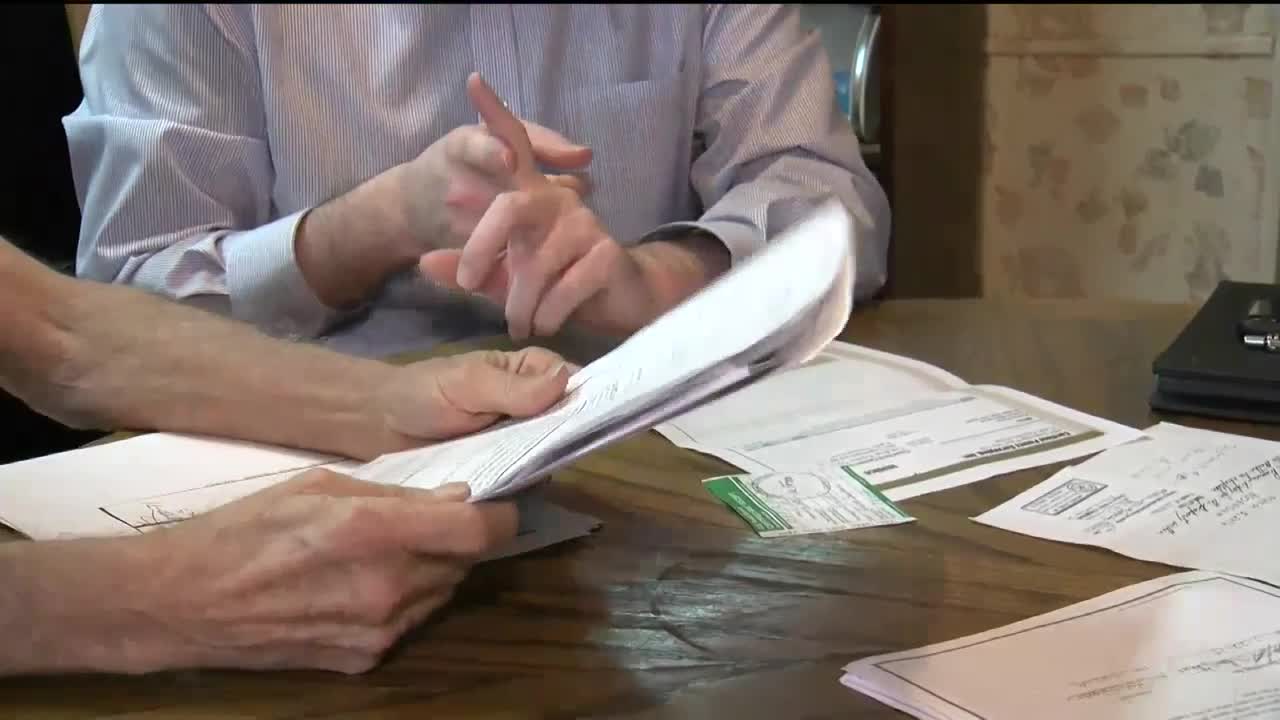 Imagine buying property and paying taxes on it, only to have the county take it and give it to someone else. That's exactly what happened to Matthew Anderson, a Pueblo West homeowner. He says a county leader used his elected position and power to take his land, but News 5 Investigates found more than one public official is responsible for what happened. "I feel like I've been robbed," Anderson said. 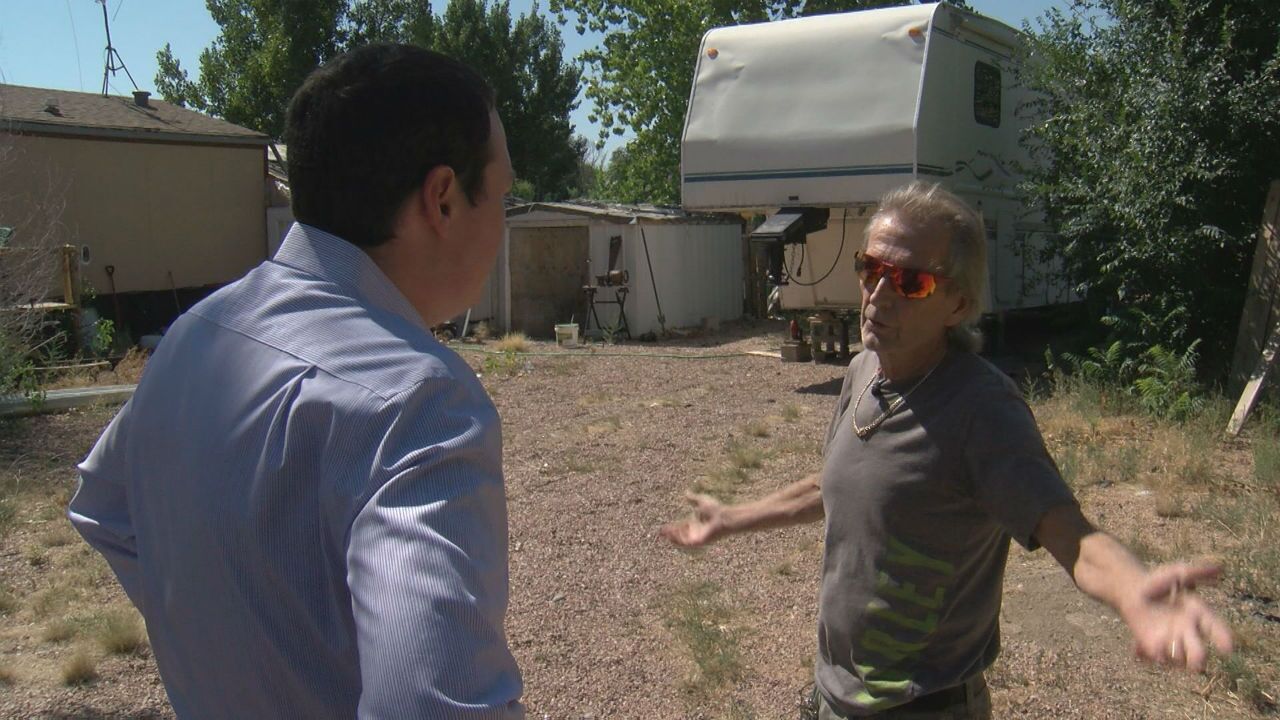 PUEBLO WEST — Imagine buying property and paying taxes on it, only to have the county take it and give it to someone else.

That's exactly what happened to Matthew Anderson, a Pueblo West homeowner. He says a county leader used his elected position and power to take his land, but News 5 Investigates found more than one public official is responsible for what happened.

Anderson is in dispute with Pueblo County after the land he purchased next door to his home was suddenly taken out of his name and given back to the original seller who no longer lives in Colorado.

"I just wanted to add value to my house here and have a larger yard and build a garage," Anderson said.

According to the bill of sale, Anderson paid $12,000 for the property.

He registered what he thought was a valid deed with the Clerk and Recorders Office in May 2018 and for an unknown amount of time, the County recognized and accepted the deed.

More than a year later in July 2019, the Pueblo West Metro District sent a letter to Anderson, alerting him that he was in violation of the community's covenants and couldn't use the vacant land to store his RV and trailer, unless he joined the two properties together into one address.

Anderson hired a surveyor to help prepare the paperwork, and that's when a problem was discovered.

"She (the surveyor) went to the courthouse and they told her it was an improper deed and took the property out of my name and put it back in the former owner's name," Anderson said.

Property records show the seller, Benjamin George, was given the property back despite Anderson having a signed and certified deed on file with the Clerk and Recorder's Office.

"The lady down there told me...I can't believe it but she told me that they'll register a piece of toilet paper if you just pay them the money," Anderson said. "And I thought when you register something at the courthouse at the Register of Deeds, I thought it had to be something legal, not just something out of the blue but I guess they'll register anything over there."

News 5 Investigates reached out to Clerk and Recorder Gilbert Ortiz on Tuesday, Sept. 10 for clarification on this situation. Chief Investigative Reporter Eric Ross also asked Ortiz whether he wanted to address the issue in an on-camera interview.

As the Pueblo County Clerk and Recorder, I am charged with recording certain official documents, including deeds and other records relating to real property. My office, however, does not - nor is it permitted to - give advice or make determinations on the legal sufficiency or consequences of those documents. Absent a few specific statutory exceptions, Colorado law instructs me to record a document so long as it appears to fall within a proper categories of records. With respect to this specific incident, I can make no comment except to emphasize my confidence in the work my staff performs.

In response to our request for an on-camera interview, Ortiz felt that commenting further would be irrelevant.

"Since I am not the office that determines the sufficiency of the document, I think that a comment from me would be irrelevant," Ortiz said via email.

Anderson says he's baffled the Clerk's Office would register a deed that doesn't meet the legal qualifications to be recognized under Colorado law.

Ortiz couldn't explain what specifically was wrong with Anderson's deed, so News 5 Investigates reached out to Frank Beltran, the county's assessor for clarity.

Chief Investigative Reporter Eric Ross asked Beltran whether it was true that someone could register a document on toilet paper with the clerk's office.

Beltran acknowledged that this was factually correct, but added that just because something is registered on toilet paper doesn't mean it is a legally accepted document.

We also brought this allegation forward to Ortiz who did not respond and address that specific statement.

"I would like to ask them (the Assessor's Office) after you put this (land) in my name, how can you take it out of my name," Anderson said.

Anderson provided the tax bill for the parcel of land which was in his name. He also showed us other property records listing him as the owner.

However, if you go online to the County Assessor's Office web page, Anderson's name is not on the property listing anymore as the "owner".

Ross asked Anderson whether he attempted to reach out to Ortiz and Beltran prior to contacting News 5 to resolve the issue.

Ross asked, "What do they say when you call?"

"Neither one of them guys will want to talk with me," he said.

Anderson claims Beltran even hung up the phone on him. We asked Beltran about this, and he admitted he did hang up the phone and has not called Anderson back because of his alleged attitude.

"If they could take the property out of my name, I'm sure they could put it back in my name," Anderson said.

Beltran doesn't dispute that Anderson purchased the property, but says without a valid new deed, he cannot legally give him ownership rights back.

Since Anderson has not been able to get a hold of the original seller, his only other option is to apply for a Quiet Title Decree, which is basically a fancy term for filing a court case and letting a judge determine who has rights to the deed.

Q: When buying a home or land, how do I avoid a problem like this?
A: If you are purchasing property without a realtor, it may be worth having an attorney familiar with real estate law look over the documents to ensure an easy and smooth transition. While this service will likely cost you money up front, it can save you time in the long run.

Q: Why would the County Clerk's Office register a bad deed in the first place?
A: As Pueblo County Clerk and Recorder Gilbert Ortiz explained in a statement, he says his office does not (and is not permitted to) give advice or make determinations on the legal sufficiency of a document. In other words, if you take a document or piece of paper to the Clerk's Office and pay the required fees, the document you presented will be recorded.

Q: If Colorado Statute requires the words "sell and convey" to recognize a deed as valid, this may seem like simple terminology any court clerk should look for prior to recording and certifying a document. Why wouldn't a clerk look for this?
A: While Ortiz would not comment on this specific case, his statement makes it clear that his office is not permitted to fully analyze a record or document to determine its legality.

Q: When did you reach out to Clerk and Recorder Gilbert Ortiz and County Assessor Frank Beltran?
A: Both parties were contacted via email on Tuesday, Sept. 10. We also followed up with phone calls.

Q: How did you verify that the property was in Anderson's name prior to it being switched back to the original seller's name?
A: In addition to property tax records, Beltran acknowledged over the phone that an employee in his office prematurely put the property into Anderson's name without a valid deed. According to Beltran, the document was only considered to be a bill of sale and did not meet statutory requirements to be labeled as a true deed. When the mistake was discovered, Beltran said they reversed the decision and put the ownership title back in the original seller's name.

Do you have a problem or issue you'd like News 5 Investigates to look into? Send an email to News5Investigates@KOAA.com or call our tip line at 719-228-6275.