COLORADO SPRINGS- We have a problem with the deer population, but no one seems to have a clear solution. Investigative Reporter Patrick Nelson spent two months working with wildlife officials to track the urban deer herds in the Colorado Springs area and beyond.

The bottom line is city leaders can’t come up with a plan that will please everyone. Some people say it’s time to kill some of the deer, others want the deer to live and don’t believe there’s a problem at all. Wildlife officials say the longer the city goes without a plan the greater the danger becomes for residents and the deer themselves. 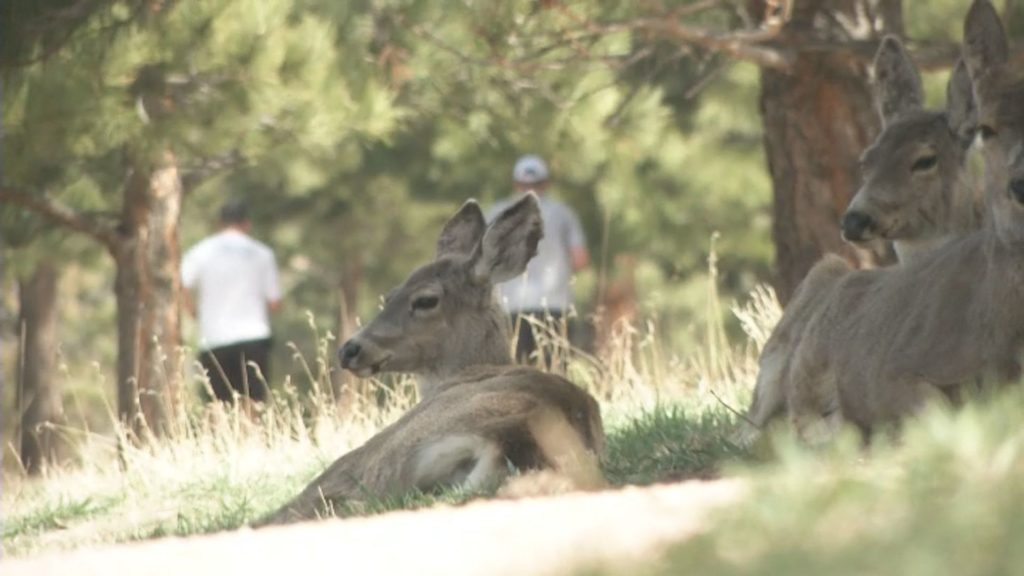 “These deer are pretty much comfortable in this kind of situation. This is Flying W Road and there’s cars coming up and down it all the time. People are just walking by, walking their dogs and as you see they are just bedded down and relaxing,” said State Wildlife Officer Corey Adler.

This is life for the deer and the people who share the neighborhoods on the west side of Colorado Springs.

Adler showed us the neighborhoods hundreds of deer call home.

“You’ll drive down one street and count 15 and then you’ll turn the corner and count another 15. It’s just amazing,” said Adler.

“These are all bucks,” said Adler looking out the window of his pickup truck at the animals. “They group up and create bachelor herds.”

Life in the city provides the deer protection from natural predators and plenty of food. Especially in people’s yards even though feeding wildlife is illegal.

“He’ll spend most his day there, get up and feed a little at different houses,” said Adler looking at a large deer laying in someone’s yard. “If he’s not getting what he wants he could be an issue.”

In addition to the dangers of car crashes and the unpredictability of wild animals running through neighborhoods, wildlife officials say without managing the deer population they fear the animals living in close quarters will have a negative impact on their health.

“When deer reach a certain level something can happen. A disease can come through and then we’re going to have people calling our office because deer are dying in their yards and this isn’t right and why aren’t we doing something about it,” said Adler.

“When I was out walking precincts I was dodging deer herds out on the eastside,” said Councilman Pico.

The City of Colorado Springs hired a consultant to try to figure out how to handle all the deer. Pico says he realized just how serious the overpopulation is when the company said how many deer would need to be put down to manage the herd.

“We’re already taking out almost 400 deer just with automobiles. The company we hired said you’ve got to take about 1,000 out,” said Councilman Pico.

The challenge is trying to figure out a way to manage the herd that doesn’t upset residents. Frank McGee the state’s area wildlife manager says it’s nearly impossible.

“You don’t want to have someone who doesn’t want to see a hunter harvesting a deer have them exposed to that, but right now we are having those deer die on our roads basically every day,” said McGee.

With such a dense population where deer hang out, city leaders say there won’t be a licensed hunt.

“In a perfect world what people would like is a solution that reduces the population of deer in town in some manner that is non-lethal,” said McGee.

But the cost of keeping these deer alive adds up.

“It gets to be very expensive. You’re talking about $1,000 a deer when you get into trying to do some of these other measures,” said Councilman Pico.

At the Air Force Academy Federal Wildlife Officer Brian Mihlbachler says a once unmanaged deer population caused problems too. In 1986 there were about 1,800 deer on the academy grounds. In that one year there were 175 car versus deer crashes reported.

“The base instituted a deer hunting program in 1988 to try to deal with the rise in the deer population and the increase in the vehicle accidents,” said Mihlbachler.

The result, today there are about 200 deer on the academy grounds and the number of reported car versus deer crashes is between 25 and 30 a year.

“I understand some people are against hunting or don’t like the fact you have to kill animals to control populations, but that’s really what it takes when you’re dealing with something of this scale,” said Mihlbachler.

This summer in Woodland Park city leaders are having a work session to discuss options for managing their urban deer herd. Unable to come up with a plan of their own, Colorado Springs leaders want to know more.

“State Wildlife they have to approve these plans, so I’m going to watch with interest what Woodland Park does. Down in Cañon City they looked at it and walked away from it. They have the same problem, the same number relatively, but they walked away,” said Councilman Pico.

But wildlife officials say walking away from this issue comes with consequences.

“The further down the road you kick the can the more work it’s going to be,” said McGee.

So what might we see in Colorado Springs and how soon?

“Possibly hire a company who would come in after midnight or something like that and use silencers or suppressed and do things in very carefully controlled areas. So, they can do it safely and remove the deer. Maybe, but that’s a hypothetical that is probably two years away,” said Councilman Pico.

This issue will go before Colorado Springs city leaders in the fall. Right now, city officials are in a data collection stage trying to find out more about just how many deer there are and the impact they are having.

For more on how residents are fueling problems with urban deer check out our follow up story: https://koaa.com/news/news5-investigates/2019/05/28/news-5-investigates-illegal-deer-feeding/