From a pig to a peacock, you’ve probably seen or heard about the exotic pets people have tried to take on airplanes.

Disability advocates say the problem is only getting worse with pet owners abusing laws meant to protect people with actual disabilities.

It is illegal in Colorado to misrepresent a pet as a service animal, but News 5 Investigates found that’s not stopping people, including doctors, from skirting the law. 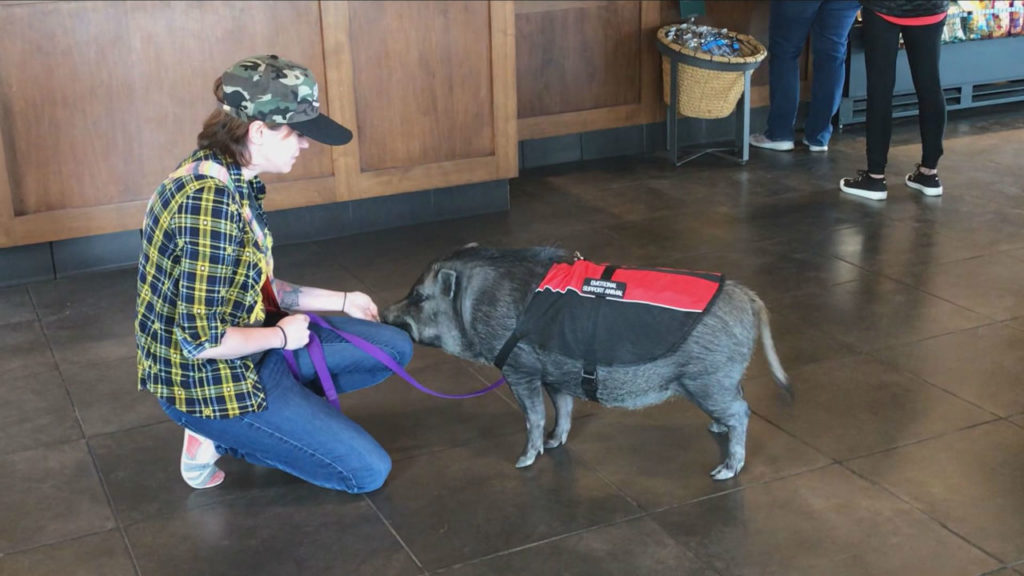 Instead of risking a fine for declaring a “fake” service animal, people have started registering their pets as emotional support animals. In return, these animals are allowed to fly on airplanes in the cabin with its owner and live in places with “no pet” policies.

Mental health professionals are supposed to evaluate patients before declaring them in-need of an emotional support animal, but our investigation found one doctor willing to bypass that process for a fee.

“We’ve heard the stories of people taking their parakeet onto the airplane and dogs that are not trained and they literally poop in the aisle,” Pat Going, a member on the Colorado Advisory Council for Persons with Disabilities said. 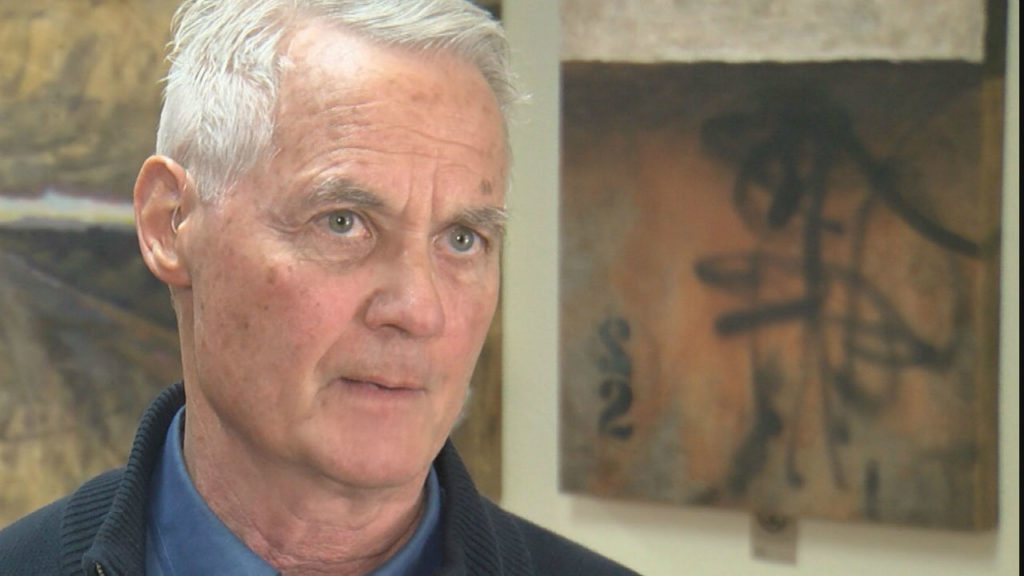 Going says there’s a lot of confusion surrounding the difference between emotional support animals, service animals and the people who misrepresent them.

“Because of that (the confusion), we decided to have an open house to talk about both (service and emotional support animals) under the umbrella of assistance animals,” Independence Center Advocacy Manager Becca Michael said. 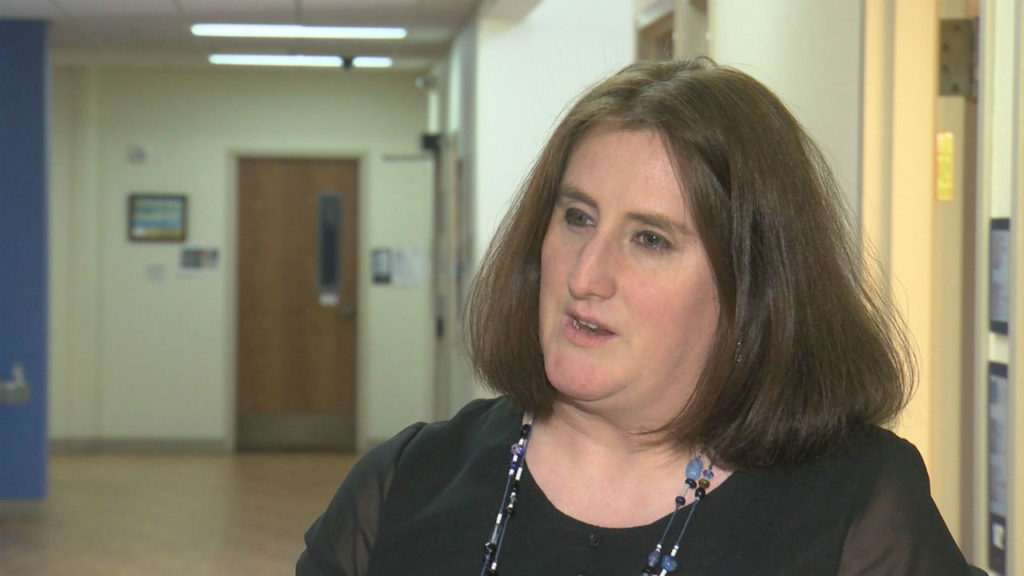 Michael and Going are working hard to educate the community on how to handle encounters with people and their pets.

“A service dog is a dog that is trained to perform a specific task,” Going said. 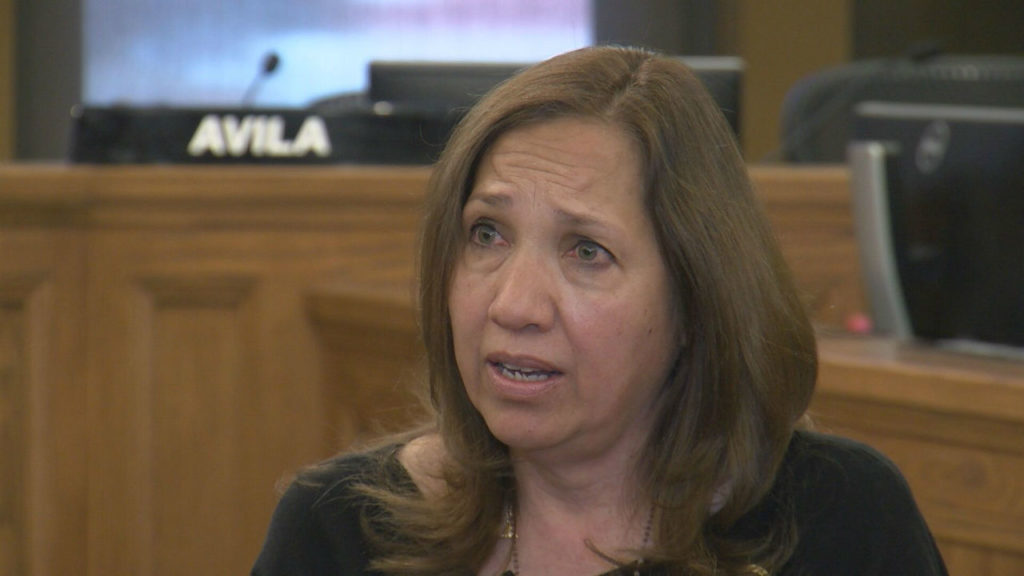 “I would like to have my eyes back and not have a dog but we, people with disabilities, really need these dogs to make life more accessible and mobile for us,” Avila said.

Service dogs go through extensive training and commonly help people who are blind or have some medical condition.

When it comes to emotional support animals, there is no formal training.

Real service animals are allowed to go wherever their owner goes.

Federal laws only protect your rights to fly and live with your emotional support animal. They do not have to be granted access to businesses, although small business owners and corporations can set their own policies regarding whether to allow household pets. 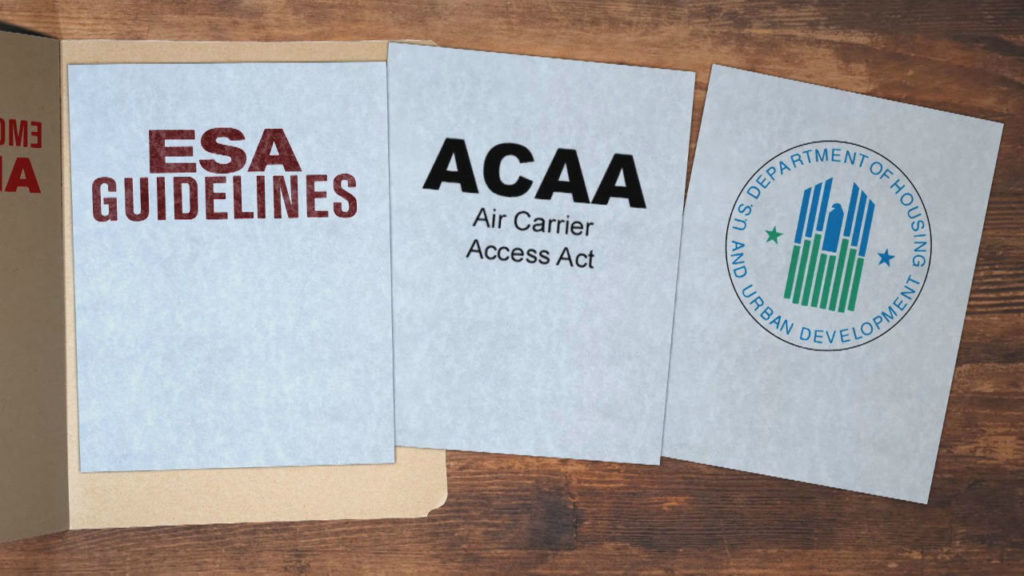 How to spot “fake” service animals:

“If you’re looking at an animal that is not a dog or a miniature horse, then that should be your first identifier that that is not a service animal,” Michael said.

Michael adds that animals and reptiles such as goats, pigs, snakes, etc. do not qualify as service animals, although there is no legislation banning them from being registered as a support animal.

“We’ve been trying for several years to get the Department of Justice to formalize some sort of certification training program so that the abuse would be minimized,” Going said. 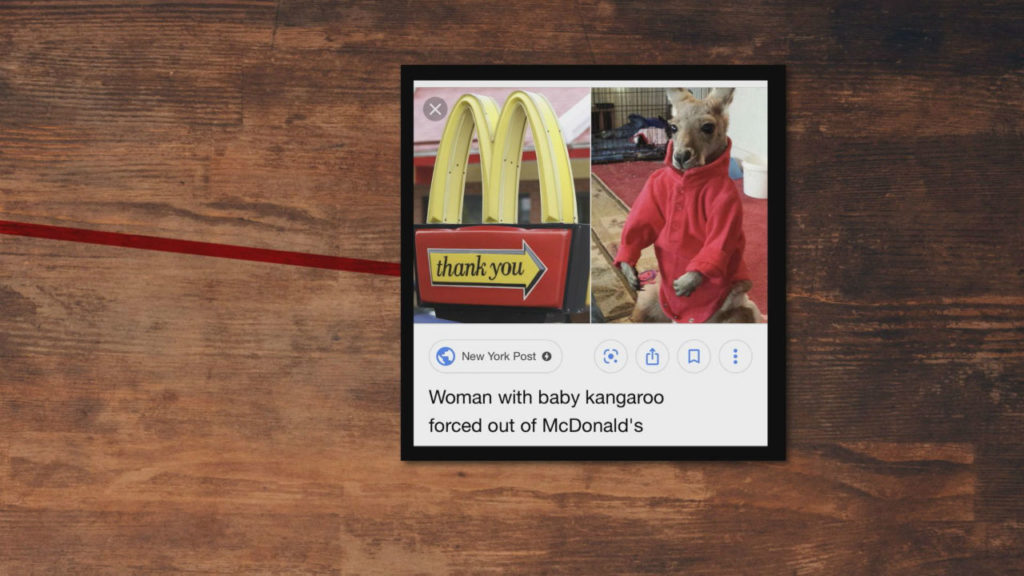 For example, the kangaroo someone tried to bring into a McDonalds, an unruly pig that got kicked off a US Airways flight, or the large turkey that got a seat on Delta Airlines.

Complaints against emotional support animals on airplanes alone have skyrocketed, from just 432 complaints in 2010 to more than 2,400 in 2016.

You can review more detailed data and reports concerning complaints against service/support animals on planes by clicking here.

“I’ve noticed in the last couple of years it (the abuse) has gotten really bad,” Avila said.  “I just went to a luncheon and somebody had their dog in there and that dog just saw Puma (Avila’s guide dog) and starting yapping away and so it disrupted everything.”

Not just anyone can claim their pet as an emotional support animal. The process requires a doctor’s note from a licensed mental health professional, but we found a web site and licensed doctor in Colorado willing to write us this support animal authorization letter for $150.

Using one of our station employees, we filled out a quick questionnaire on whether an emotional support animal would help with daily activities.

News 5 submitted the application at 9:28 on a Saturday night. 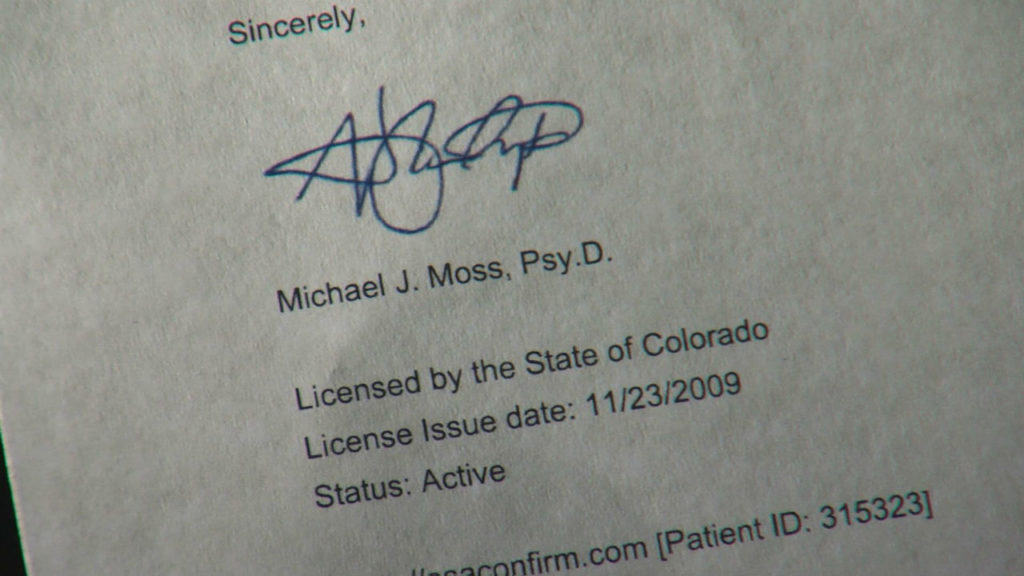 Moss says he “evaluated” our engineer’s mental health condition and is familiar with her history and with the functional limitations imposed by her emotional and mental health issues.

Our first stop was at Starbucks. 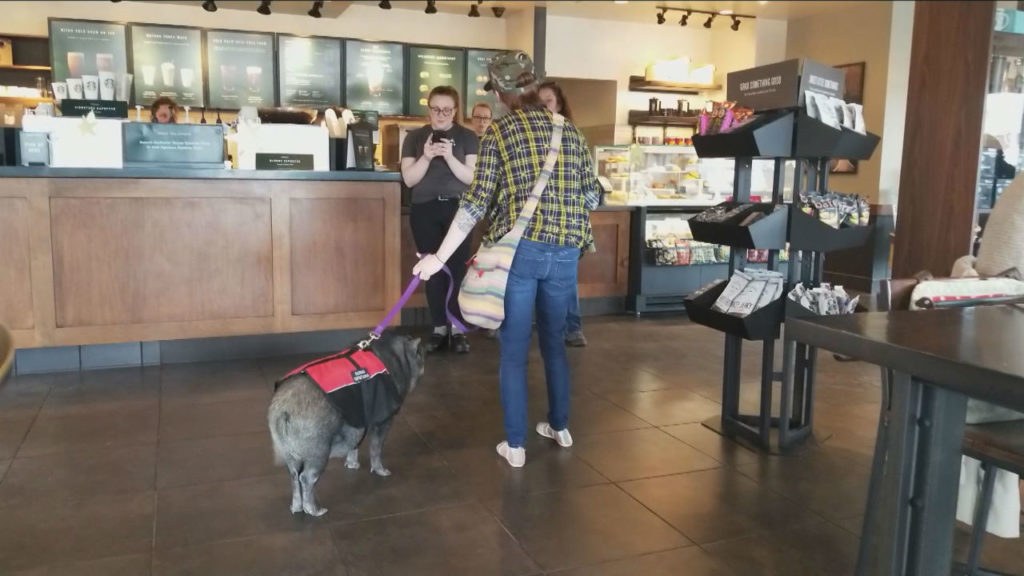 Portia the pig, who we renamed “Marilyn” for this experiment is a little shy at first and isn’t quite sure about going inside. However, that doesn’t stop Starbucks employees from running to the door to go pet it and even take pictures.

Patrons also couldn’t believe what was happening and either took pictures or completely ignored the situation.

We got Marilyn in and out of Starbucks without any issues.

Our next stop took us to Kum and Go. 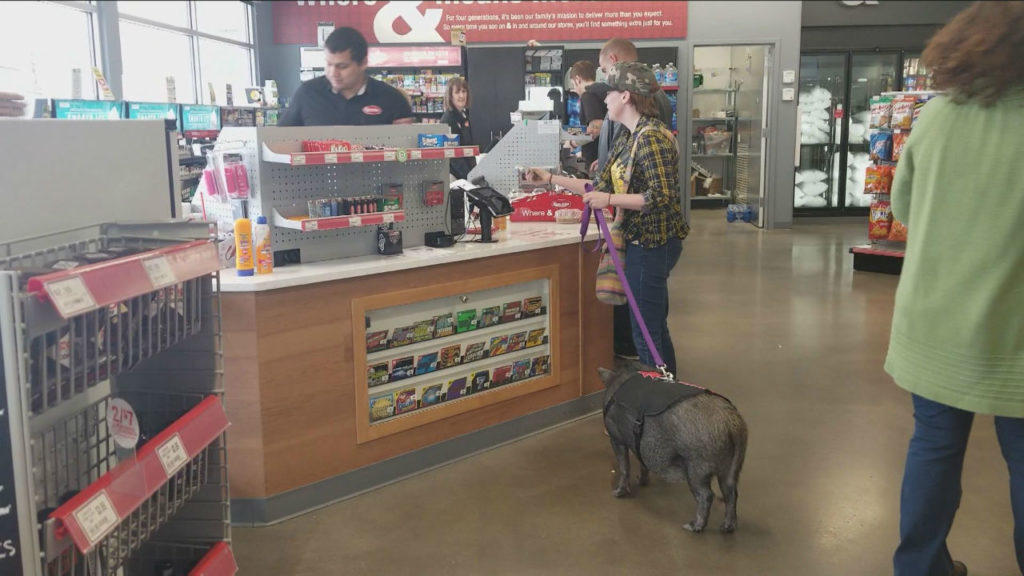 Our employee takes Marilyn up and down the aisles and nobody says a word.

Our third stop was at Subway.

Marilyn stands quietly as our employee sits down and eats.

Of course, she doesn’t go unrecognized by customers who stop to pet her.

“No one stopped us was the weird thing,” KOAA engineer Nicole Fantozzi said. “Everyone was incredibly friendly, outgoing and excited to see us. No one ever questioned bringing a pig inside a Subway or Starbucks.” 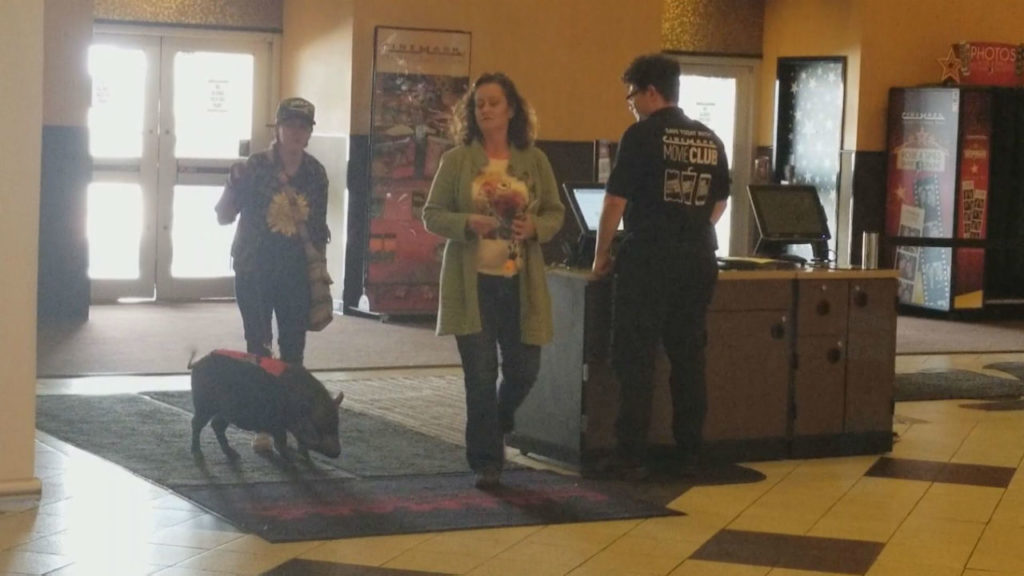 Fantozzi even got Marilyn into a local movie theater without anyone asking questions. 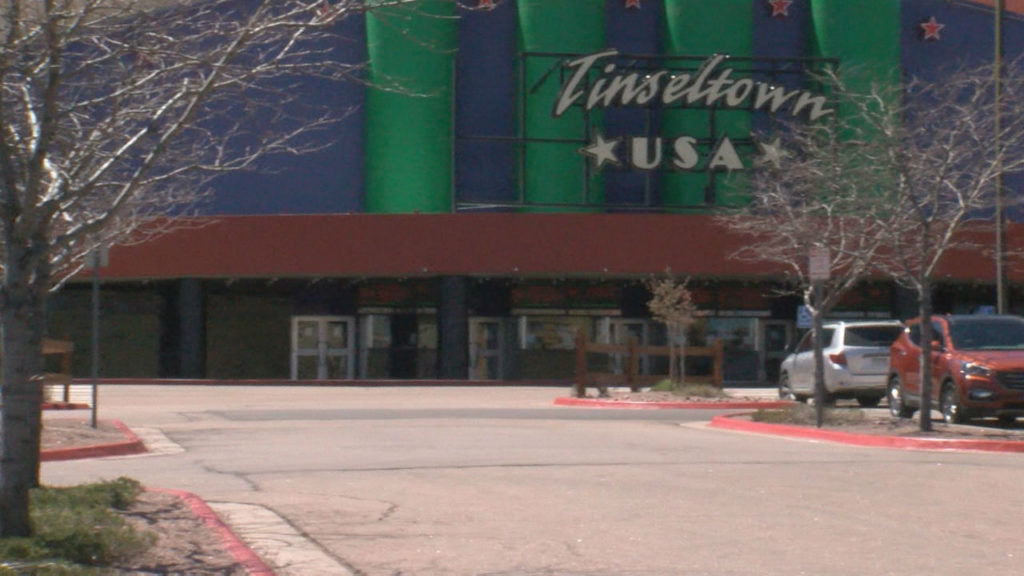 Disability advocates say there’s a fear by business owners of “asking questions” and getting in trouble.

Avila says this is true, but she also says she’s seen businesses attempt to “turn away” legitimate service animals.

There’s no accurate data tracking service animal complaints in restaurants and businesses, but it’s become a big enough issue in recent years that The Independence Center is hosting seminars to educate business owners and consumers on their rights to question pet owners.

“Sometimes when I go to a restaurant they (employees) aren’t really sure anymore,” Avila said. “They aren’t sure if that dog should be in there. They’ll tell me I can stay on the patio or we don’t allow dogs in here and I have to explain what the situation is.” 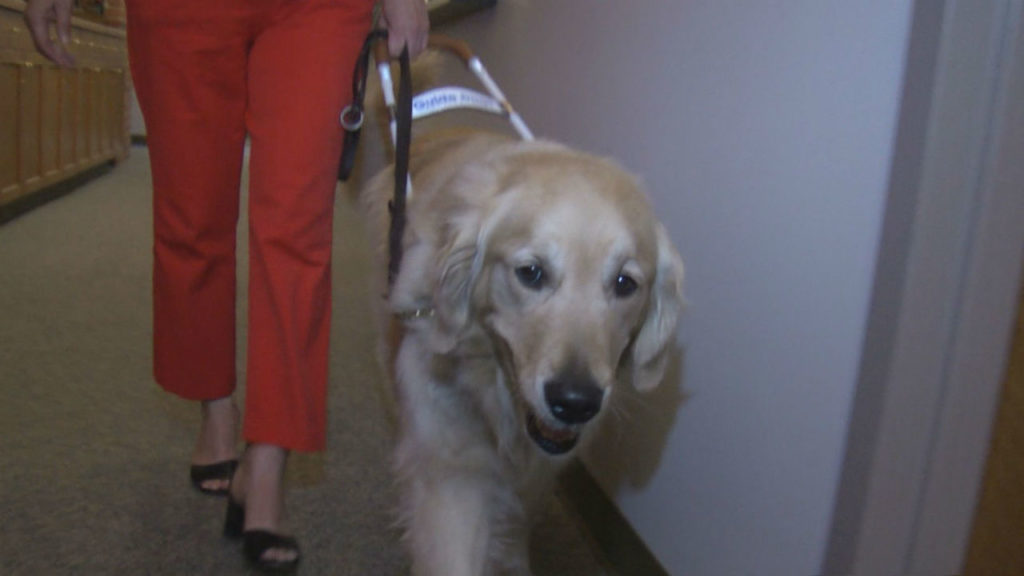 If you’re uncertain whether someone’s pet is truly a service animal, here are the two questions disability advocates say you can ask:

(2) What is the animal trained to do?

As for the doctor who prescribed our employee an emotional support pet pig with no in-person or over the phone evaluation, the State confirms it has opened an investigation into the matter.

The State Board of Psychologist Examiners has commenced an investigation into the matter but does not comment on open administrative investigations pursuant to 24-72-204(2)(a)(IX)(A), Colorado Revised Statutes.  If disciplinary action is taken by the Board against a licensee, then information regarding a complaint may be incorporated into a public document and would be open for inspection by the public.

Questions about service animals and training:

The Independence Center in Colorado Springs has taken a proactive approach in educating business owners and consumers about the differences between emotional support and service animals. To learn more about future educational opportunities or seminars related to this subject matter, please call 719-471-8181.

The purpose of this program is to educate the community on a loophole being used by both doctors and pet owners to register untrained animals as emotional support pets. While airlines are restricting the type of pet you can claim as an ESA, the industry remains widely unregulated. While a doctor’s note is required to certify your animal as an ESA, there are numerous web sites offering to certify your pets in just minutes for a fee ranging from $150-$200. As previously mentioned, traveling with an ESA does not guarantee access to businesses and business owners are well within their rights to ask patrons with emotional support animals to leave upon request. At no time during our experiment were we asked to leave a building or business with our emotional support pig, but business owners have full rights to do so. 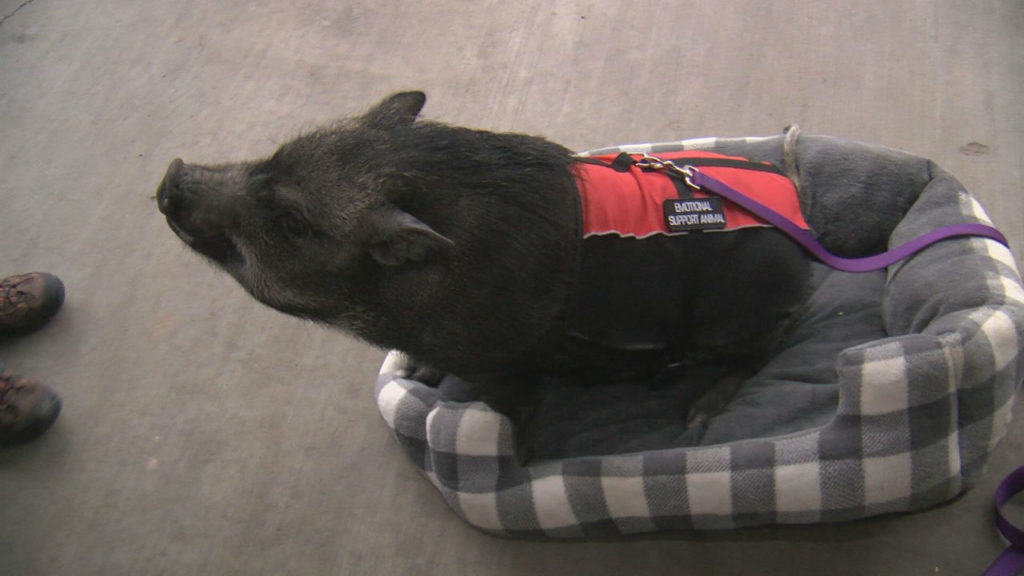 News 5 Investigates has also posted a comprehensive list of frequently asked questions related to service and emotional support animals. You can view those questions and answers here.