The new law is intended to shed light on how police, police themselves. Law enforcement agencies across the state often withhold internal affairs records meaning the public has no idea whether officers are being held accountable for their actions.

Lawmakers supporting the bill argued transparency will improve public trust and hold officers more accountable. Opponents believe existing law allowing police department’s discretion in what is released is in place to protect officers, and if the public does not like a department’s determination, they’re free to seek relief in court.

The bill gained both support and opposition as it passed through the Colorado General Assembly. In the House, the bill narrowly passed with a 33-29 vote, plus 2 representatives excused. In the Senate, it was another close one with a 19-16 vote.

The law immediately goes into effect.

“The language in House Bill 19-1119 is too broad.  The accessible records should only refer to completed internal investigations that resulted in a sustained finding and/or disciplinary action. My concern would be that defense attorneys could use not sustained or unfounded internal investigations against an officer to undermine a legitimate case. The other concern is the amount of staff time that it will take an agency to comply with the many requests now that this bill has become law.”

News5 Investigates’ Patrick Nelson brings you both sides of the argument

The City of Colorado Springs has paid out hundreds of thousands of dollars in settlements related to officer misconduct, but News 5 Investigates found in Colorado the public is often kept in the dark about what, if anything, happens to those officers.

In 2015, two men were pulled over for a traffic stop by Colorado Springs Police Department officers. Benjamin Brown, the driver, was asked to step out of the car and was placed in handcuffs. His brother Ryan pulled out his phone and started recording. The officers then took Ryan from the car and put him in handcuffs as well.

“He was pulled from his vehicle, thrown to the ground, his face was pushed into the snow and his camera was taken out of his hand and thrown onto concrete,” said John Krieger of ACLU Colorado.

This interaction led to a civil rights lawsuit and ultimately the Browns settled with the City of Colorado Springs, the city paying out more than $200,000.

Six months after the settlement with the Browns, another police encounter in Colorado Springs would prompt a new lawsuit.

Tyrrell Clayton was recording video outside of the Falcon Substation in November of 2017 when he was approached by officers who said he was acting suspiciously. The officers took Clayton’s camera and detained him. He sued and the city settled the case for $41,000.

There’s also a case involving Alexis Acker. She was arrested in November 2013, after reportedly interfering with the arrest of her boyfriend, who had a warrant. Acker was taken to Memorial Hospital where surveillance video captured Colorado Springs Police Officer Tyler Walker slamming Acker to the floor. Acker suffered injuries to her face and sued the police department. The city settled for $100,000.

Cases like this received the attention of state lawmakers.

“Why can’t we know why the City of Colorado Springs paid out $100,000 to Alexis Acker? We don’t know why and that just builds and breeds mistrust,” said Colorado State Representative Dave Williams (R-Colorado Springs).

Speaking a month before Polis signed the bill into law, Williams told News5 Investigates, “This is actually a modest bill we are trying to get passed here and again all it does is it allows for these internal affairs investigative reports once they are completed to be opened up to public scrutiny and even with that law enforcement can still redact personal information to make sure we are protecting police officers and no undue harm comes to them,” said Rep. Williams.

“Sometimes the officer’s right to privacy outweighs the public’s need to know and sometimes it doesn’t and so the FOP’s position is we think the system works perfectly fine,” said Sisson.

As it stands now, law enforcement agencies are given wide discretion on what information they don’t have to release to the public. Sisson says if the public doesn’t like it they can take it to court.

Sisson believes internal affairs files should remain confidential and he fears this law could adversely affect law enforcement’s ability to recruit new officers. “It’s just becoming harder and harder for police officers to want to remain police officers because they are subject to such scrutiny,” said Sisson.

“We are raising standards and I think when you serve the community in that way it’s going to attract the best that we have in our community,” said Rep. Williams. 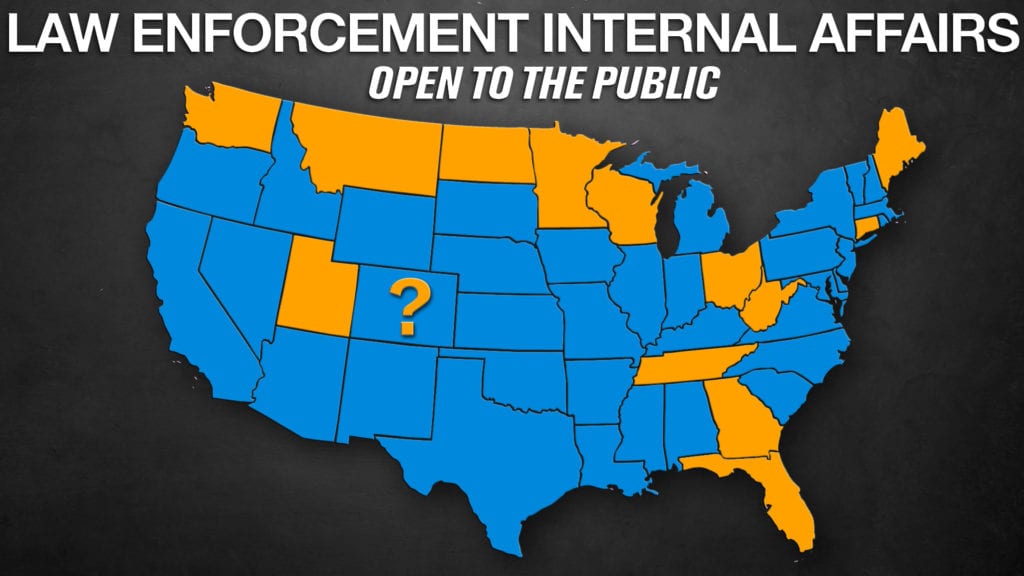