The Colorado-based company HomeAdvisor says it conducts background checks on its network of reputable contractors, but the company has yet to fully explain how it “recommended” an unlicensed contractor with a lengthy criminal past. 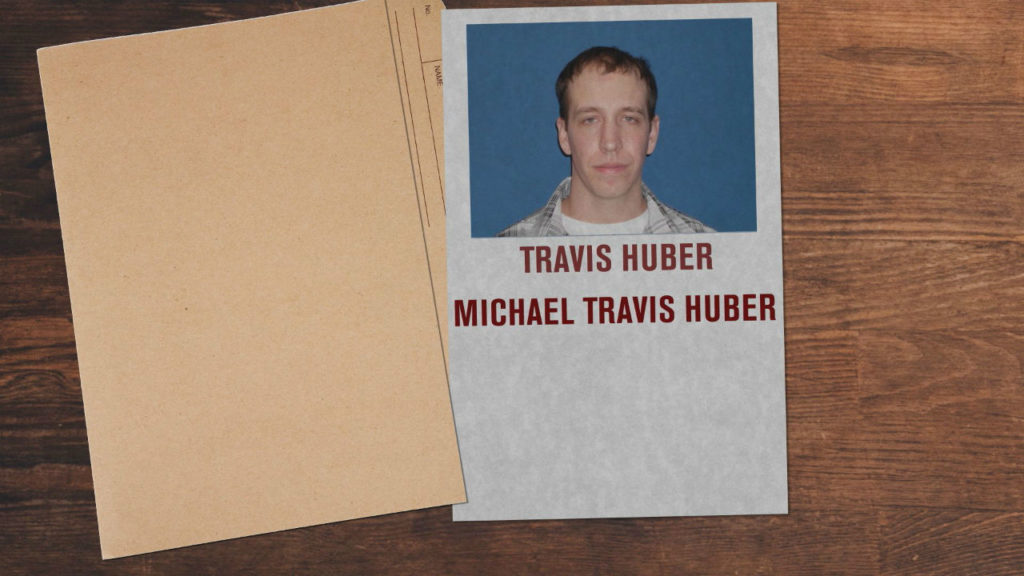 “We needed an old tub pulled out and a big accessible shower put in,” customer Debbie Hulme said. “We needed a shower big enough for a wheelchair.” 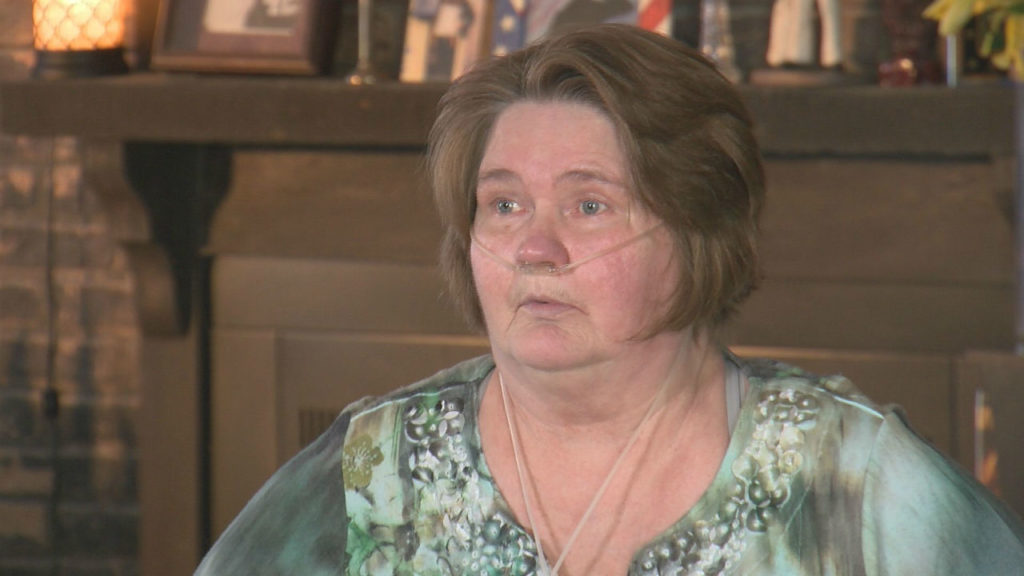 Hulme lives in Pueblo West and hired Huber to remodel her master bathroom.

While he did perform demolition work, he didn’t even come close to finishing the job. 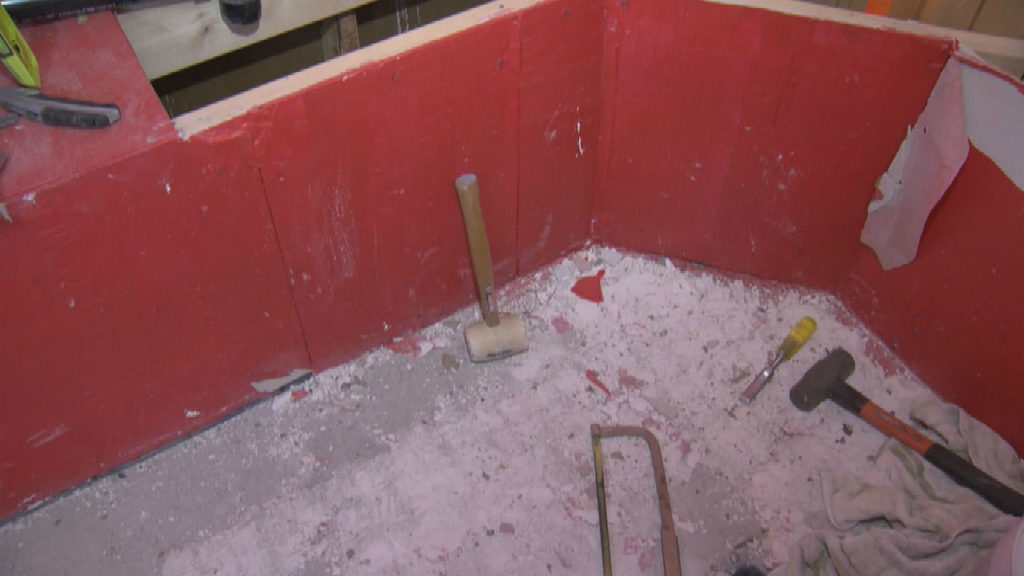 “The bathroom is completely trashed to the point where I have to sleep in the other end of my trailer home in order to have a bathroom near me,” Hulme said.

Hulme is just one of a handful of people who say they used HomeAdvisor to find a reputable and licensed contractor. 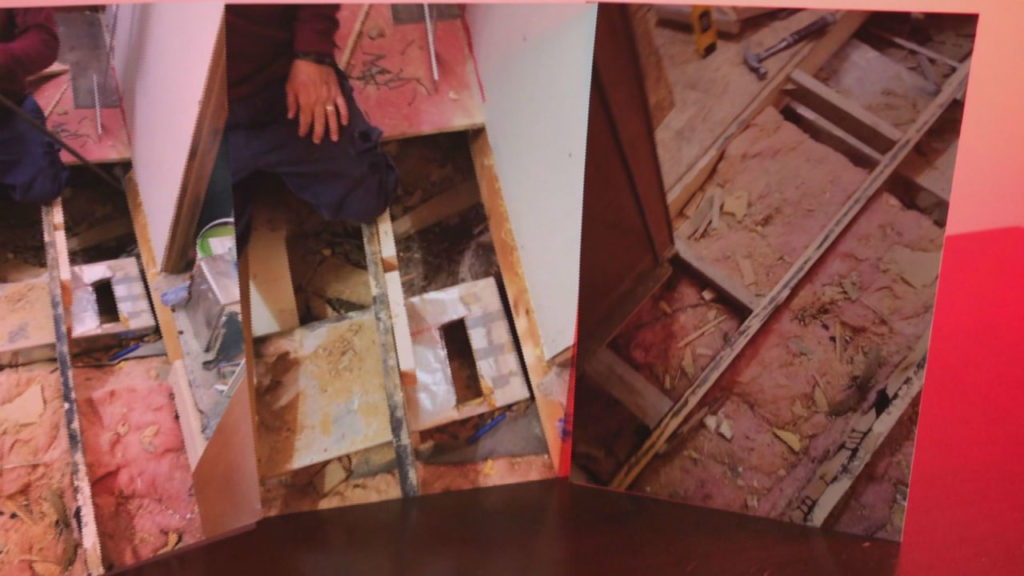 “I’m very upset with HomeAdvisor,” Hulme said. “We thought about possibly bringing them to court because I think they are partially responsible.”

Instead, Hulme sued Huber and won $7,500 which she claims has not been paid. 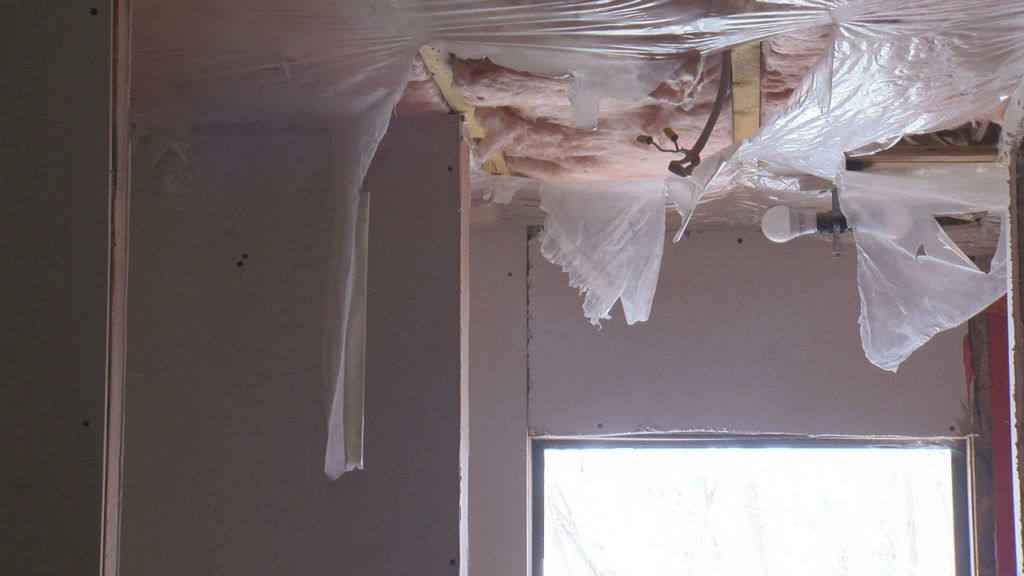 “I wanted a full patio here,” customer Nash Lucero said. “I got on HomeAdvisor and I did some research, put his name in and it all came up favorable. There were other references on there that gave him good references and I went ahead and went with it.” 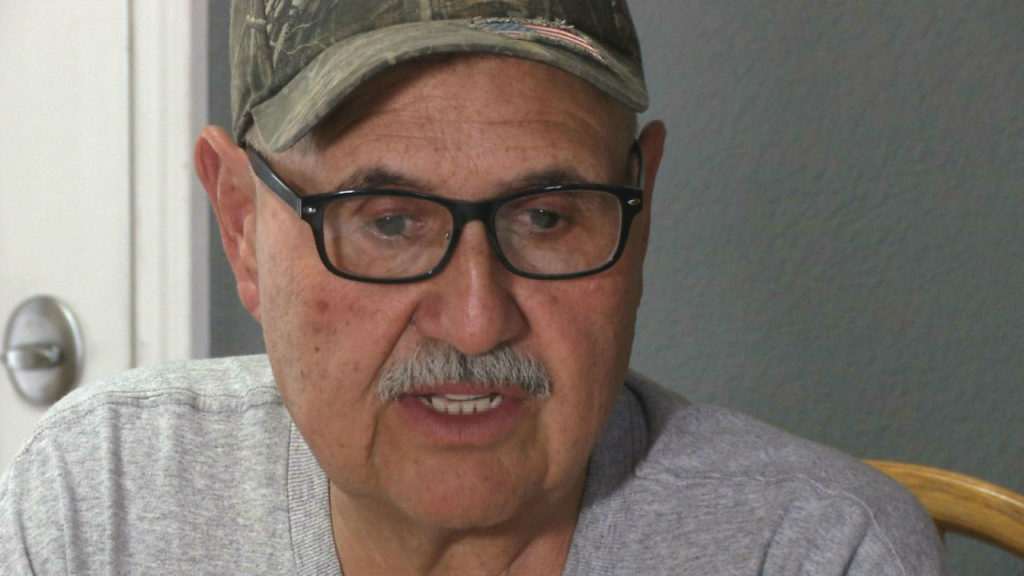 Lucero says a crew Huber sent out did build the patio, but the roof is uneven and the electrical work was not done. 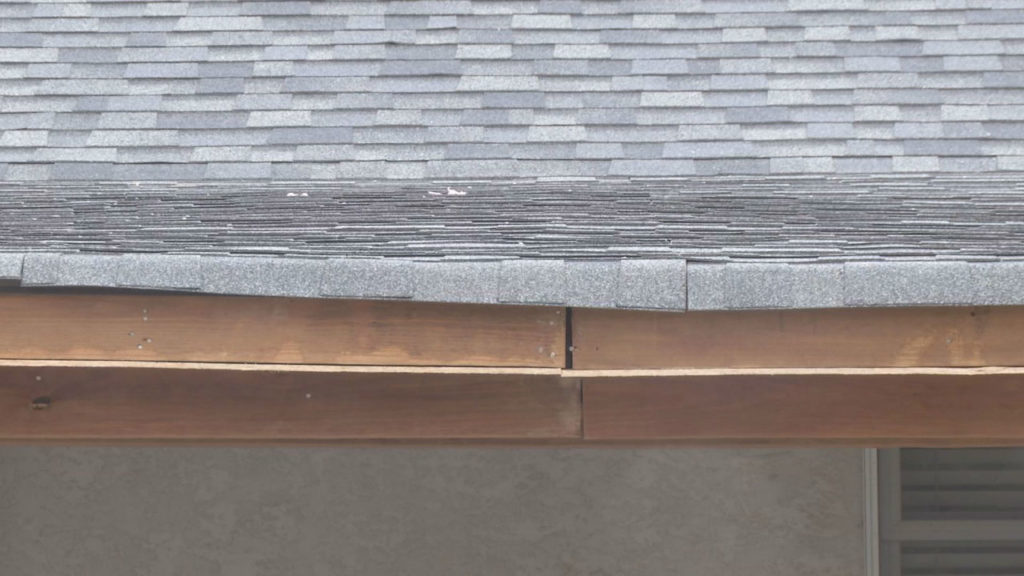 “He was going to put the gutters back on, put the trimming back on and he quit,” Lucero said. “He just stopped.” 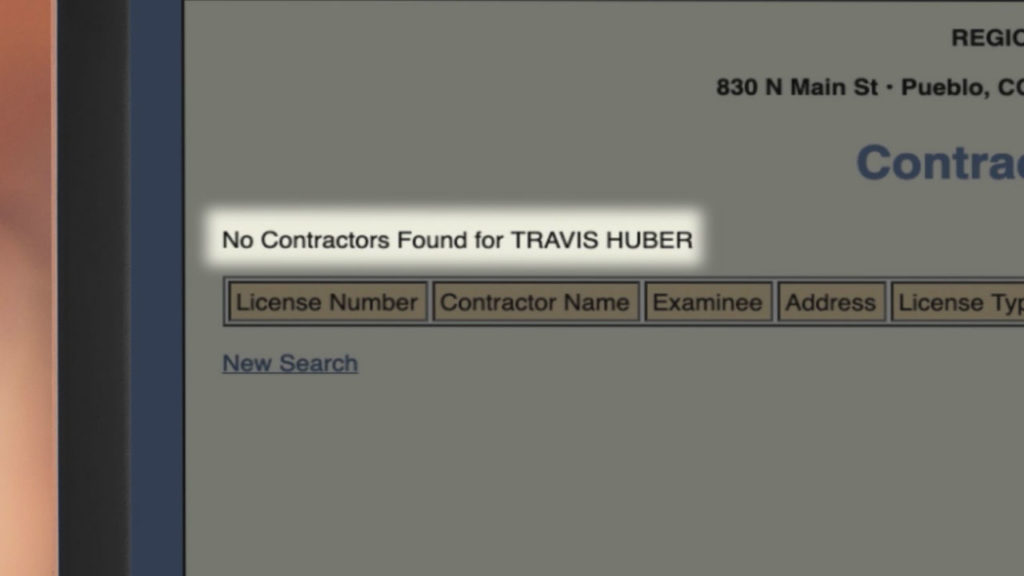 Most reputable contractors will hold a general contractors license. However, more skilled work such as electrical and plumbing jobs require additional licenses and permits. 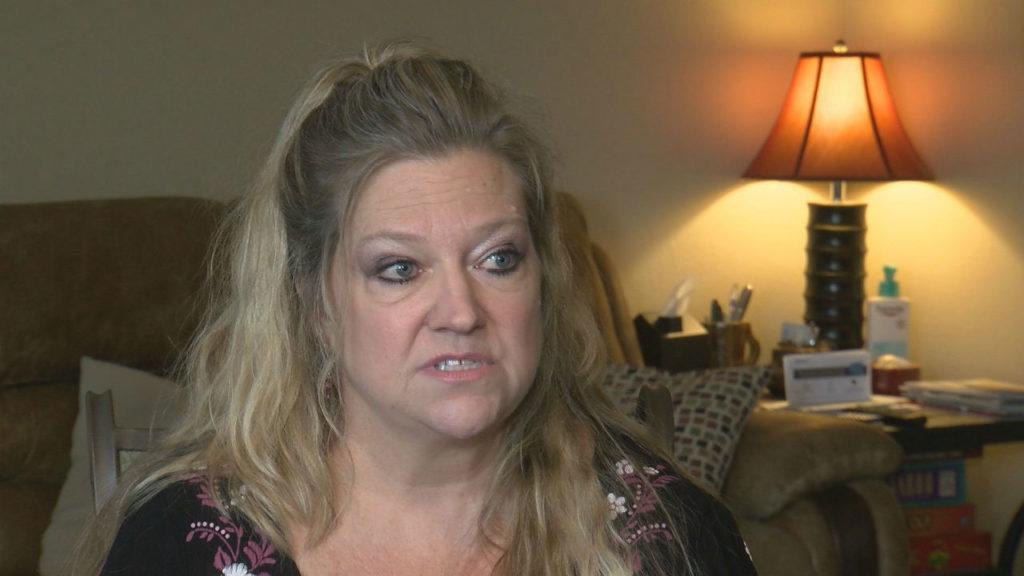 Campos paid Huber to install a new floor, which he did start. However, Campos claims Huber caused damage during installation.

“As he was doing the floors we had to remove the baseboards,” Campos said. “When he removed them, he was breaking every single one. There was not one salvageable baseboard and he said we had to get new ones. He also put holes in the walls as he was ripping out the baseboards.” 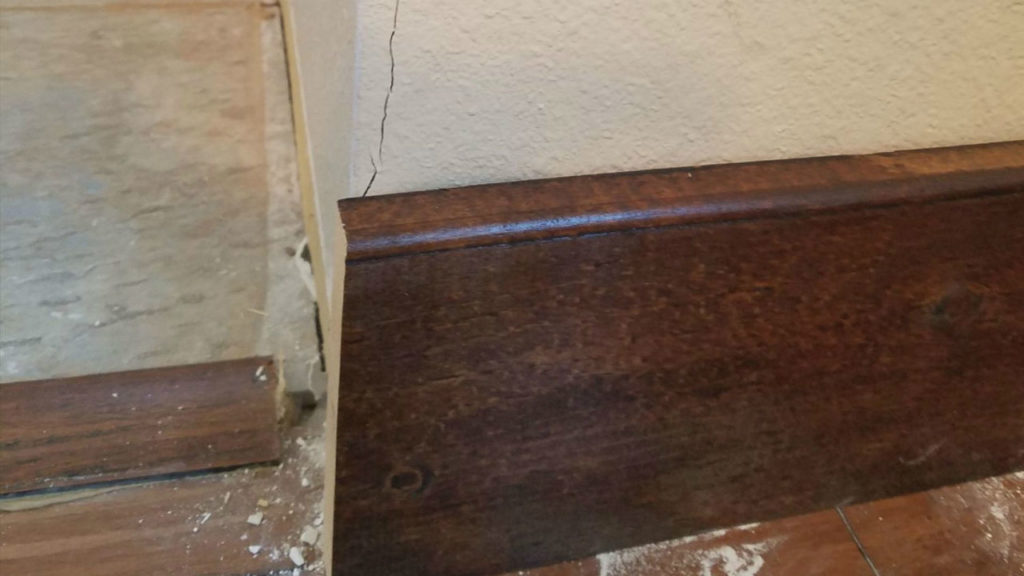 Campos said she fired Huber based on the damage he reportedly caused.

In addition to not having any type of general contractors license, News 5 Investigates uncovered Huber’s criminal record dates back to the 1990’s.

He has convictions for criminal mischief, trespassing, assault, theft, aggravated motor vehicle theft and sexual assault—convictions HomeAdvisor didn’t seem to know anything about and neither did his victims at the time they hired him. 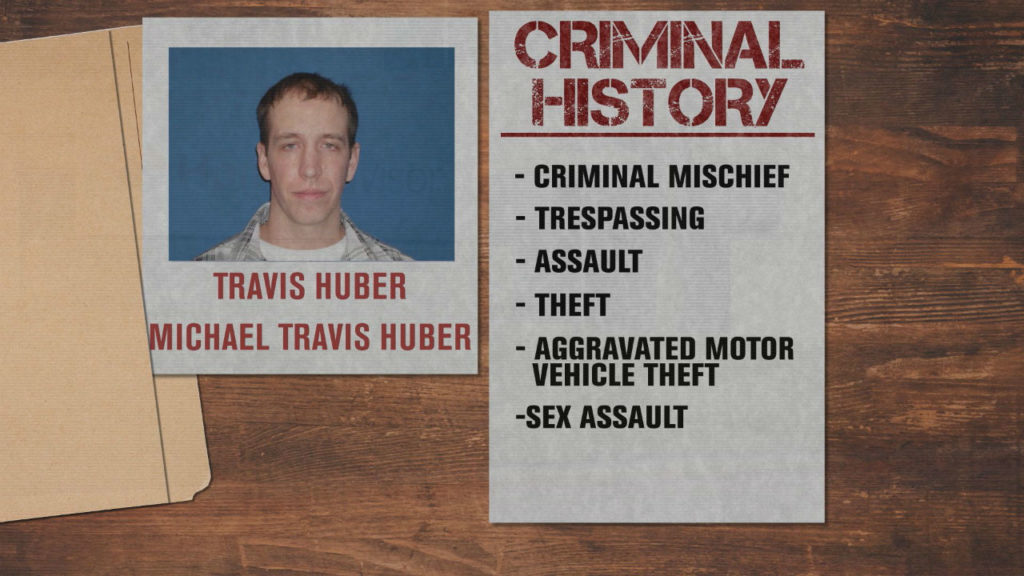 “I found out after the fact and it scared me,” Campos said. “He needs to be stopped and he needs to stop doing this to people.”

Huber is known to change his name and has been found soliciting business on Facebook’s “Marketplace”.

His legal name is Michael Travis Huber, but he may be going by Michael Huber, Travis Huber or Michael T. Huber.

“We refinanced the house in order to pay for this (renovation work) and it’s all gone,” Hulme said. 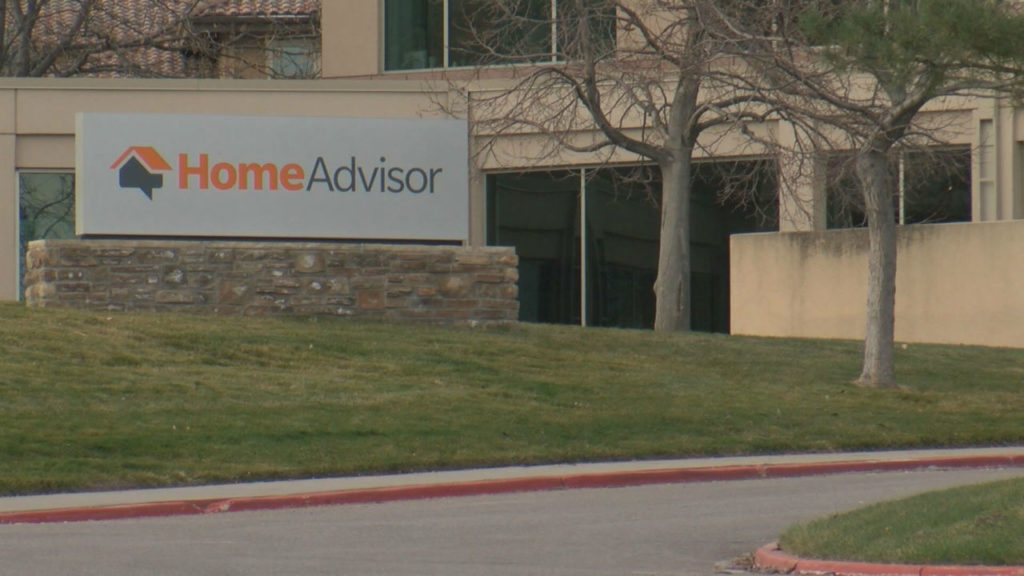 “As soon as we became aware of potential concerns for this pro, he was terminated from our network, after less than two weeks of participation. Our customers are always a priority and following this event, we have enhanced our screening process to help prevent a similar situation from happening in the future.”

Huber did not send News 5 an official statement or agree to go on camera, but News 5 has been in contact with him through Facebook Messenger.

“I have over 250 satisfied customers,” Huber said. “The work I do is above average and cost lesser than most. Everyone wants something for free and if you don’t give in to them the (sic) make accusations.”

News 5 Investigates asked Huber if he could connect us with any one of his satisfied customers, but he declined.

“I don’t need anyone to vouch for me,” Huber said.

Despite also claiming to be part of the HomeAdvisor network, the company adamantly denies that statement.

“We permanently blocked this pro based on his name and known aliases,” a spokesperson said via email.

The best way to find a licensed contractor is to visit or call you local Regional Building Department.

Helpful tips when hiring a contractor:

While checking online reviews can be helpful, it never hurts to ask your neighbors who they may have hired for similar work.

Never pay for the job in-full at the time the contract is created. Most legitimate contractors will not require the job be paid in full before construction beings.

Always ask for a completion date in writing on the contract. Otherwise, the contractor could delay the project and there’s not much you can do to fight that process.

If a contractor starts a job and then fails to finish it, it’s most likely going to be a civil matter and your best course of action would be to seek legal counsel and file a lawsuit in small claims court.

If you discover the contractor you hired has a pattern of collecting money for jobs and not doing any work, this might be a criminal matter and in this case, you should contact local law enforcement.

How to report ‘bad’ contractors: