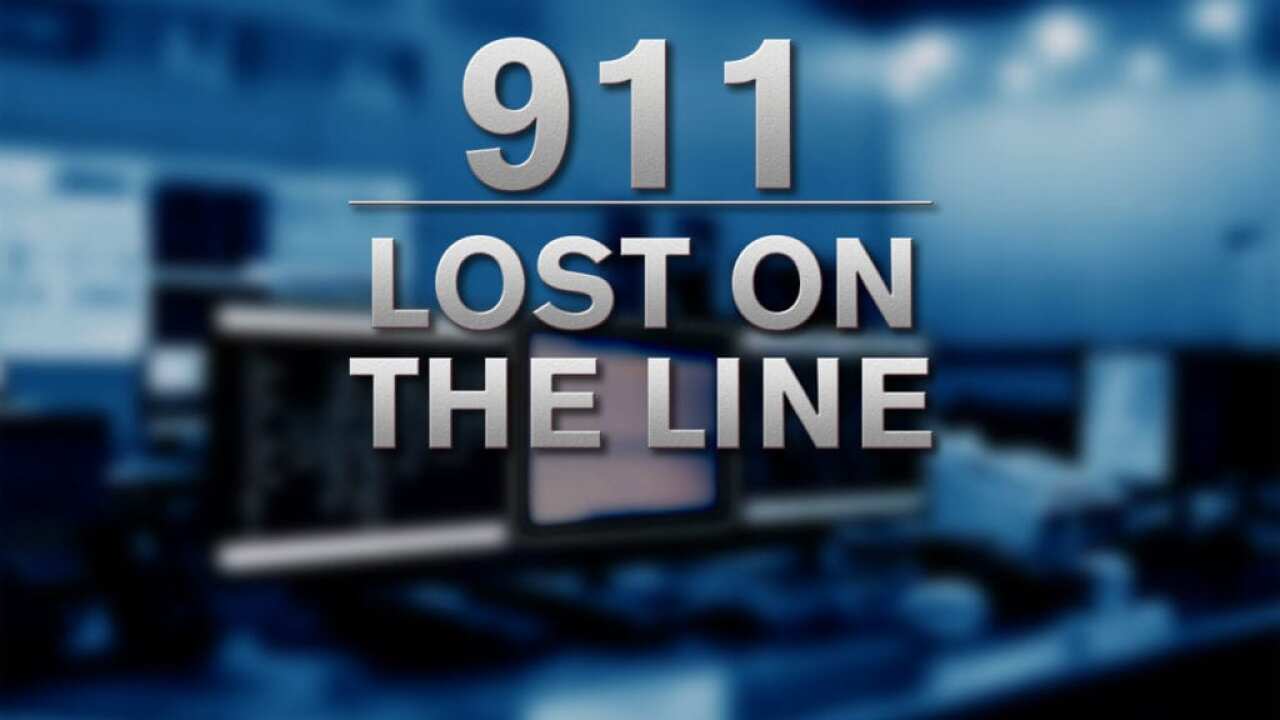 The upgrades are being called "Next Generation 911". According to a spokesperson for the U.S. Department of Transportation, the technology upgrade will create a faster, more resilient emergency system and boost public safety through enhanced capabilities such as text messaging, image and video processing, advanced mapping and other improvements.

"The funding is one piece of $109 million in grants being awarded to 34 states and two tribal nations as part of the 911 Grant Program," Kathryn Henry with USDOT said. "These grants are critical in helping first responders provide aid more quickly and responsively, thus saving lives."

If you'd like to see an itemized breakdown of grant money coming to each state, click here.

Interested in learning how the Next Generation 911 system works? Click here to watch a series of informational videos about the upgrades.

Recent nationwide tragedies involving 911 call centers not being able to locate callers led News 5 Investigates to question why dispatchers don’t always know someone’s exact location when they call to report an emergency. As our investigation uncovered, outdated mapping technology and cell phone privacy settings are the root cause of the problem. The Pueblo County Sheriff’s Office acknowledged that dispatch centers are in the process of getting caught up with advancements in technology and the center allowed our cameras to go behind-the-scenes to show you some of the challenges dispatchers face when wireless callers dial 911.

News 5 Investigates received prior permission from the Pueblo County Sheriff’s Office to conduct a trial experiment. Under supervision, we had two different News 5 employees call 911 from two different locations in Pueblo West to see whether our location matches what dispatchers see on their computer screens. We conducted our experiment in the middle of the week during a non-busy hour. At a time when most of us rely on cell phones, we hope our program provides insight into how the 911 system works and the importance of being able to tell 911 where you are if the phone you’re calling from doesn’t immediately pop up an accurate location.

When you call for help, 911 computer systems don’t always know your exact location. The problem has proven deadly more than once in recent years.

In 2015, Shanell Anderson was delivering newspapers in the middle of the night just outside of Atlanta. Her car slid off the roadway and into a lake.

The dispatcher asks, “What is the address of your emergency?”

Immediately, Shanell tells the dispatcher she’s in her car in a lake.

The dispatcher responds, “Where are you?”

“The Fairway and Batesville,” Shanell said.

Even with a cross street, the dispatcher can’t find her.

“I don’t have that,” the dispatcher said.

More time passes, and the dispatcher still has no idea where to send help.

“Give me the address one more time,” the dispatcher requested. “It’s not working.”

Shanell drowned in the lake and sparked outrage from family members who couldn’t believe 911 was unable to locate her.

Plush was parked outside his school in his family’s minivan and somehow got trapped underneath the rear seat bench.

His cell phone was out of reach, but he was able to use voice commands to call for help.

“I’m going to die here,” Kyle told the dispatcher. “I’m stuck in my van outside the Seven Hills parking lot.”

The dispatcher asked, “The Seven Hills what parking lot? What is the address?”

The line disconnects. The 911 operator calls back, but the call goes unanswered.

9 minutes later, Kyle makes a second call to 911 and speaks with a different dispatcher.

“I probably don’t have much time left so tell my mom that I love her if I die,” he said.

Responders never got an exact location on their mapping system. However, Kyle did provide the name of the parking lot and the make and model of the van he was trapped inside.

Officers were dispatched to the area, but couldn’t find anyone in distress. It was later discovered that the dispatcher never relayed the car information to officers on the ground.

Four years after Shanell drowned and nearly a year after Kyle passed away, you may have thought the 911 system nationwide would be fixed so dispatchers know exactly where you are located. Unfortunately, that’s not always the case.

Shorter allowed our cameras to go behind the scenes to show you what dispatchers face, especially when someone is calling from a cell phone.

“It takes about 10 seconds, sometimes 20 before we get a better address,” Shorter said.

Initially, a cell phone call will ping off a nearby tower which could be miles away from your actual location.

With the help of dispatchers, we had two News 5 employees sit in their cars at two different locations. We had both call 911 twice using different cell phones from the major wireless carriers.

Josh Robinson, who works in our Marketing Department is located at the Pueblo Reservoir.

Investigative colleague Patrick Nelson is in a hotel parking lot in Pueblo West.

During Josh’s first call to 911, dispatchers get a tower address location about 3 miles away.

20 seconds pass before the computer system refreshes itself.

“There we go,” Brooks said. “Now I’m getting a location down at the South Marina at Pueblo Reservoir.”

As Shorter explained, cell phone calls are filtered through phases.

Phase I typically is the cell tower location.

On our second test run, Josh’s phone bypasses Phase I and immediately gives the dispatcher a pretty accurate location.

“The call is coming in at 96 East Spaulding Avenue at the corner of Croyden and Spaulding in Pueblo West,” Brooks said.

Patrick is actually located at the corner of Spaulding and Radnor.

“It’s within the yellow area,” Brooks explains as she points to her computer system map. “It’s within about 100 meters.”

100 meters may not sound like a big difference, but if you’re in a larger, more congested area, dispatchers may not be able to instantly know what building or parking lot you are in.

On our fourth test call to 911, our address initially pinged off a cell tower at Palmer Lake and Del Norte, about a mile away from our location.

After the system didn’t refresh quick enough to give Brooks a more accurate location, she refreshed the system manually.

“I decided to do a manual re-bid because it was taking too long for the system to do it automatically,” she said. “Once I did that it came up exactly where he said he was at the corner of Radnor and Spaulding.”

Dispatchers are able to get exact locations from landline telephones, but research the Pueblo County Sheriff’s Office provided shows more than 85% of all calls to 911 are placed from mobile phones.

“Security of course for the cell phone carriers of their customers data is a top priority and historically, Apple has been very reluctant to turn over any type of information like that without just cause,” Shorter explained.

Out of the 20,000+ calls dispatchers took last year in Pueblo County, only about 600 were “off the grid”, meaning dispatchers never could get the exact caller’s location and at times, couldn’t hear whether anyone was on the line.

It’s rare for dispatchers to not get any type of location for a caller but sometimes, approximate locations can be problematic too.

During our 1-hour shooting session inside the dispatch center, Brooks took a call from a person reporting a rollover accident.

Brooks asks the caller, “Is this on the right hand side if you’re going east? Is this going toward the KOA campground?”

She has to ask a series of questions to find out where exactly to send help.

There has been a long battle over whether someone’s location should be instantly revealed to 911 in the event the caller cannot tell dispatchers exactly where they are located.

This is all about to change.

“There’s an express consent when you dial 911, you’re implying that you want us to help you and so Android had allowed that technology before Apple.”

The Pueblo County dispatch center is about to undergo major mapping upgrades later this year which will not only allow dispatchers to know your exact latitude and longitude coordinates, but also what floor of a building you’re calling from.

A spokesperson for the Colorado Springs Police Department says they are working to upgrade their systems to this technology as well.

Once the upgrades are complete, it will not matter whether you call 911 from an iPhone or Android device. Dispatchers will have access to the same location tracking services.

“It will actually let us tap into the technology similar to Uber or Lyft,” Shorter explained.

Instead of relying on cell towers to find where you are, dispatchers will have access to more precise coordinates like the ones you see when you open up Apple maps or Google Maps.

Q: Does my cell phone carrier have any impact on how easily 911 can locate me?

A: It certainly can depending upon how many nearby cell towers cater to your specific service vendor. Unfortunately, some people will sign up for cell phone service without first verifying service availability in their region. We know it’s 2019, but Colorado has a lot of rural areas where some cell phone carriers still don’t offer service. Even if you don’t have internet connectivity or 4G LTE service, you should still be able to dial 911.

A: It’s not uncommon for people to be calling 911 while they are driving or out hiking. Shorter reminds people that remembering landmarks and mile markers can help them. If you’re unable to remember mile markers and landmarks, cross streets can also help. If you’re out hiking, knowing the name of the trail you’re on can assist responders in finding you.

A: Further investigation found that Shanell’s call got routed to a dispatch center in a neighboring county.

Q: How often do 911 calls get routed to the wrong dispatch center?