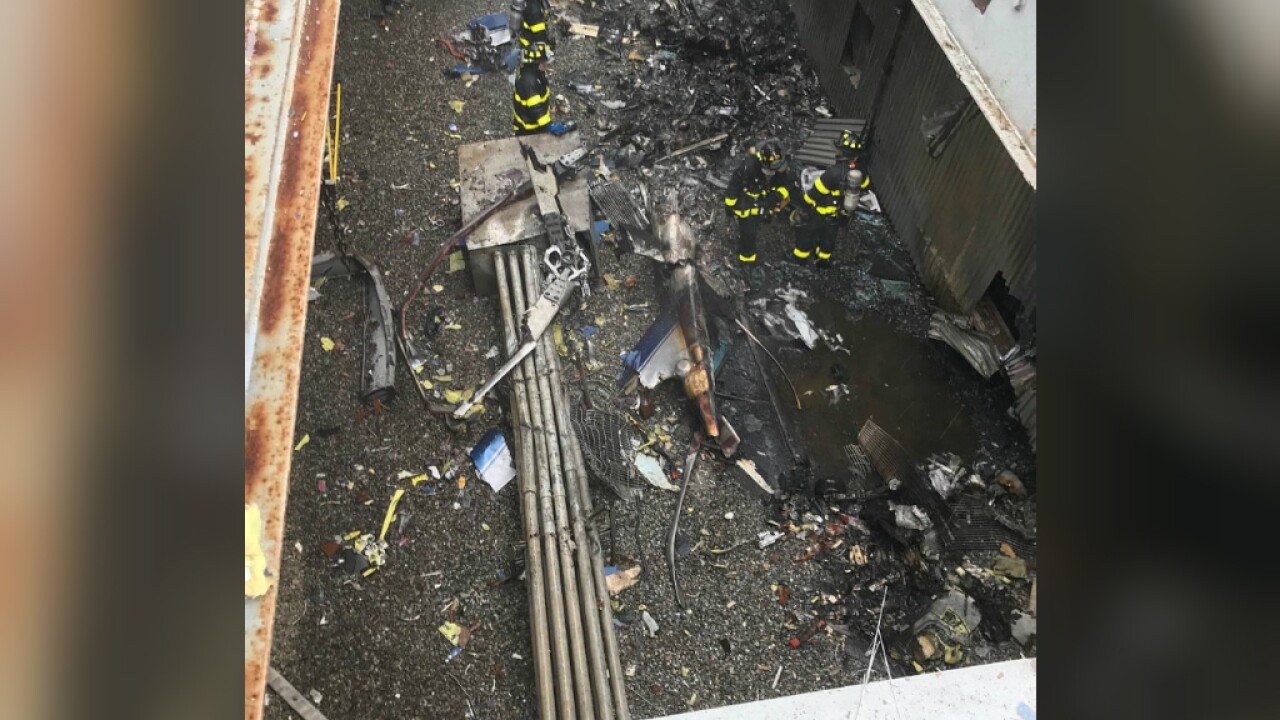 The helicopter pilot who crashed on to the roof of a New York City building was not licensed to fly in poor weather, the Federal Aviation Administration said.

It helps pilots learn to fly without visual reference to the sky under instrument flight rules, by relying solely on instruments to "fly blind" in clouds or heavy fog under the direction of air traffic control, Schiavo said.

At the time of Monday's flight, moderate to heavy rain was falling in the city, and visibility at Central Park was down to 1.25 miles. Winds were from the east at 9 mph.

City officials said they were not sure what led the pilot to crash-land atop a building without a helipad.

A typical afternoon inside the offices of a Midtown Manhattan skyscraper suddenly turned to chaos when the helicopter, 11 minutes into its flight, landed on the roof.

Based on interviews investigators conducted at the East 34th Street Heliport on Manhattan's East Side, the pilot made statements that he believed he had a 5- to 7-minute break in the rainy weather to take off, according to a law enforcement source familiar with the investigation. The pilot did not refuel at the heliport, the source added.

Once the pilot was in the air, he radioed back to the heliport and said he needed to return. The last time the pilot communicated with the heliport he conveyed he was unsure of his location, the source said.

The pilot then flew around Battery Park on the southern tip of Manhattan, up the west side of the island and then, somewhere around the streets in the 40s, started to veer toward Midtown Manhattan before crash-landing, the law enforcement source said.

McCormack had flown for American Continental Properties, the company that owns the helicopter, for five years, according to a company statement.

McCormack received his commercial pilot's license in 2004, according to Federal Aviation Administration records, and he was certified as a flight instructor for a rotorcraft-helicopter last year.

In October 2014, the pilot was flying a helicopter over the Hudson River with six tourists on board when a bird struck and broke part of the windshield, according to CNN affiliate WABC. McCormack was forced to make an emergency landing at the West 30th Street Heliport. No one was injured, according to the report.

The National Transportation Safety Board released details Tuesday about its investigation, which could take as many as 24 months to finish, though investigators are aiming for 15 months. A preliminary report is expected in two weeks, but it will not provide a cause for the crash.

The helicopter had no flight data recorder or voice recorder, nor was it required to have those devices on board, said NTSB air safety investigator Doug Brazy. The aircraft did, however, contain other devices for recording data, and investigators continue to search for them, he said.

Complicating matters is that the crash debris is located on a rooftop. "It's highly fragmented and a post-crash fire consumed much of the evidence," he said.

The pilot was never in communication with air-traffic control, but that was not a requirement either, Brazy said.