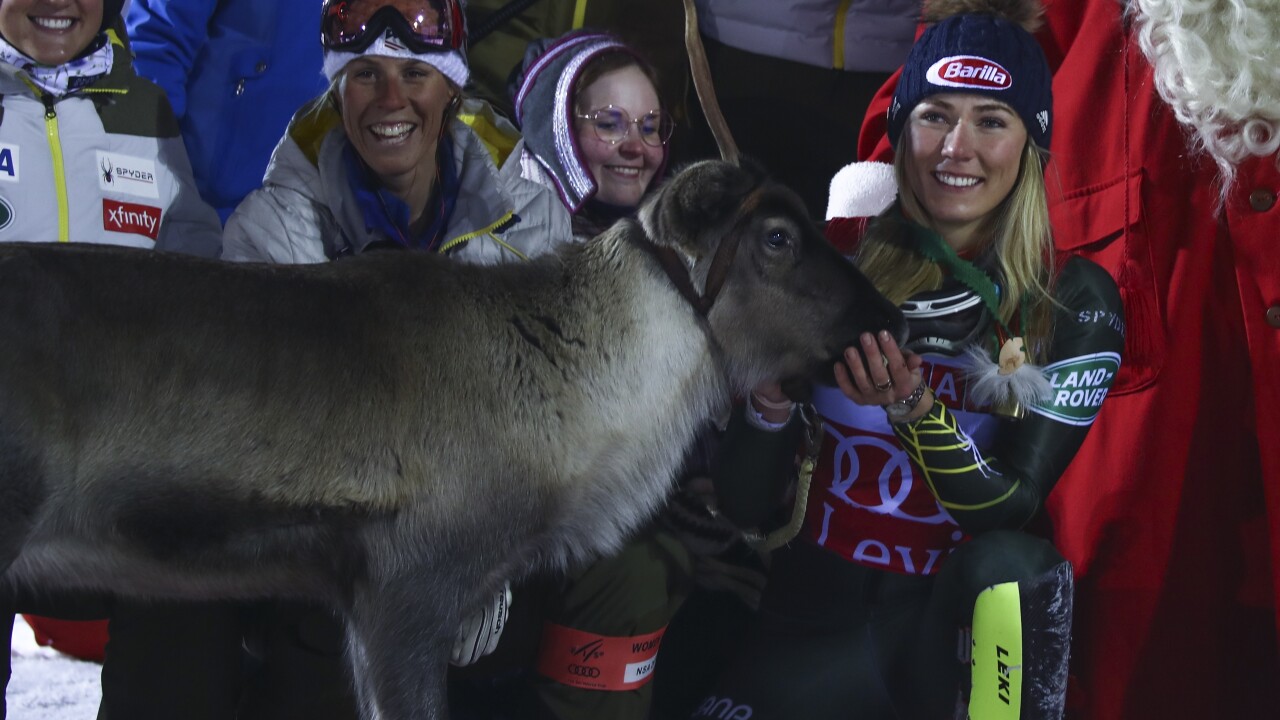 LEVI, Finland (AP) — Coming off a record-breaking season with 17 race wins, Mikaela Shiffrin didn’t need much time in the new campaign to reach yet another milestone.

The American set the all-time World Cup record for most slalom wins by any skier on Saturday, after earning her 41st career victory in the discipline at the season-opening slalom race.

Shiffrin beat the 32-year-old best mark from Swedish great Ingemar Stenmark, who won 40 slaloms between 1974 and 1987. Shiffrin amassed her total in just seven years, having won her first race in December 2012.

“I don’t feel super emotional, I am just happy,” said Shiffrin, who usually refrains from focusing on records or statistics. “I am happy with my skiing for the first (slalom) race of the season.”

Shiffrin, the 2014 Olympic and four-time world champion, has held the women’s record since passing Marlies Raich’s tally of 35 slalom wins a year ago.

On Saturday, Shiffrin came from behind to defeat Petra Vlhova, runner-up to the three-time champion in the overall standings last season.

Vlhova, who won this race in 2017, led by 0.13 seconds after the opening run but skied out early in her final run and failed to finish, immediately after the American had posted the fastest run time by far.

“I had a solid first run and in the second run I was really attacking and fighting,” Shiffrin said. “I may have been a little bit lucky but we have no idea how (Vlhova) was going to finish.”

Even with Vlhova skiing out, the duo looked set to continue dominating the discipline, as all 21 World Cup slaloms since January 2017 have been won by either Shiffrin (17) or Vlhova (4).

On Saturday, Wendy Holdener finished runner-up but trailed Shiffrin by 1.78 seconds, a country mile in a sport mostly decided by hundredths of a second.

The Swiss skier had been nursing an elbow injury in recent weeks but improved from sixth position after the opening run.

“I still can’t fully stretch the arm but you don’t need that in slalom,” Holdener said. “I am just happy that I could start here.”

Katharina Truppe of Austria was 1.94 behind in third, while the rest of the field finished more than 2.4 seconds off the pace.

In the opening run Shiffrin and Vlhova had already created a gap to the rest of the field of almost a full second, with Vlhova leading the American by 0.13.

“It was OK, I felt pretty solid with my skiing,” Shiffrin said after the first run. “I think there are some spots where I can be a little bit more relaxed.”

Vlhova was 0.32 behind Shiffrin at the second check point but found a smoother line going over a roll into the steep part of the Levi Black course.

“I didn’t do a great job on this one. It’s pretty sharp. I think Petra did quite a good job there,” Shiffrin said. “I like to be in a position where I am kind of coming from behind and chasing.”

New Zealand teenager Alice Robinson, who beat Shiffrin in the season-opening giant slalom in Austria last month, was sitting out the race with a knee injury.

It was Shiffrin’s fourth career triumph in the race in Finnish Lapland, where winners receive a reindeer.

The win also gave Shiffrin an early lead in the overall standings, going into the World Cup weekend in Killington, Vermont, next week.

“It’s a really good start to the season. It’s always great to be on the podium, in Soelden and then here,” Shiffrin said. “It helps with the confidence in the next races to know my speed is there.”

The races in Killington include a GS on Saturday and a slalom the following day.