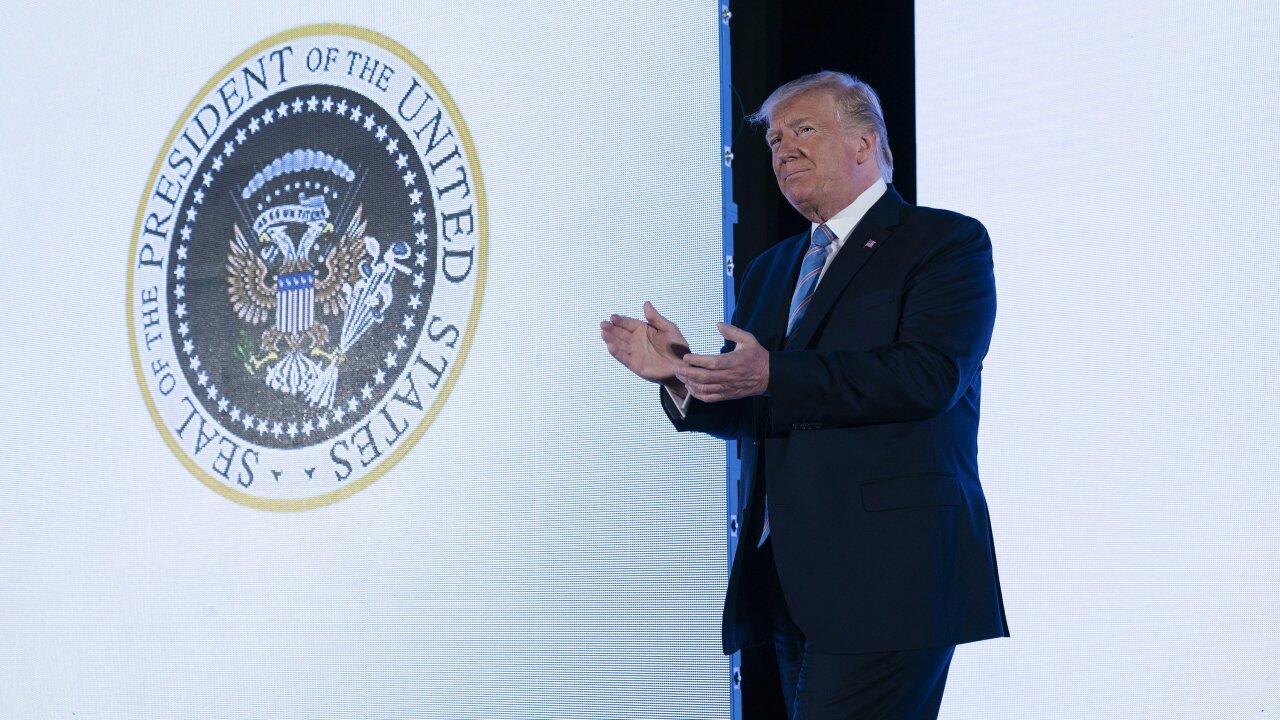 An audiovisual aide for conservative student group Turning Point USA was fired this week after President Donald Trump appeared on a stage in front of a parody image of the presidential seal at its Teen Student Action Summit.

As the President took the stage Tuesday morning before a sea of 1,500 teenage cell phones, a screen behind him showed a fake presidential seal featuring a two-headed eagle -- which bore similarity to the State seal of the Russian Federation -- clutching a set of golf clubs in its talons. The seal was visible for a short time behind Trump, who stood behind a podium affixed with the official (and un-doctored) presidential seal for the duration of his speech.

TPUSA apologized for the incident, telling CNN there was "zero malicious intent" behind the imagery.

"We're sorry for the mix-up and meant no disrespect to the White House or the President or the advance team," the TPUSA source said.

The individual responsible, a member of TPUSA's AV team, was let go in the wake of the incident. According to a source familiar with the event, the incident was just a terrible Google search mistake. TPUSA had event branding on the screens, but during a run through ahead of Trump's remarks a few hours before the event, the team was told they had to change the branding to a presidential seal, prompting a search for a high quality image.

"One of our video team members did a Google Image search for a high-res png (file) presidential seal," a source familiar with the incident said, adding that the individual "did the search and with the pressure of the event, didn't notice that it is a doctored seal."

The seal's eagle evokes imagery of the Russian coat of arms.

Trump's relationship with Russia has cast somewhat of a pall over his presidency.

Former special counsel Robert Mueller condemned efforts by the Trump campaign to seek help from Russians in 2016, but the investigation did not establish a conspiracy between Trump's campaign and the Kremlin. The President has said his campaign never colluded with Russia, but has at times sided with Russian President Vladimir Putin over US intelligence agencies , confounding even some of his allies.

A White House official soundly pointed the finger at TPUSA for the mix-up.

"We never saw the seal in question before it appeared in the video. For anything further, you would need to contact Turning Point -- it was their event," the official told CNN.

TPUSA was responsible for the event's production, including the video. The President was there as an invited guest of the group.

But another source familiar suggested it was a failure of the President's advance team, as well, which is responsible for all the details for any presidential appearance.

"Ultimately, both TPUSA and White House advance are at fault. TPUSA and their production crew were responsible for putting the wrong graphic up. But the advance office should have provided the official seal and/or approved everything that was put out," the source said.