'Near murder:' Lawsuit says police ordered K-9 to attack Lakewood man as he slept in his room 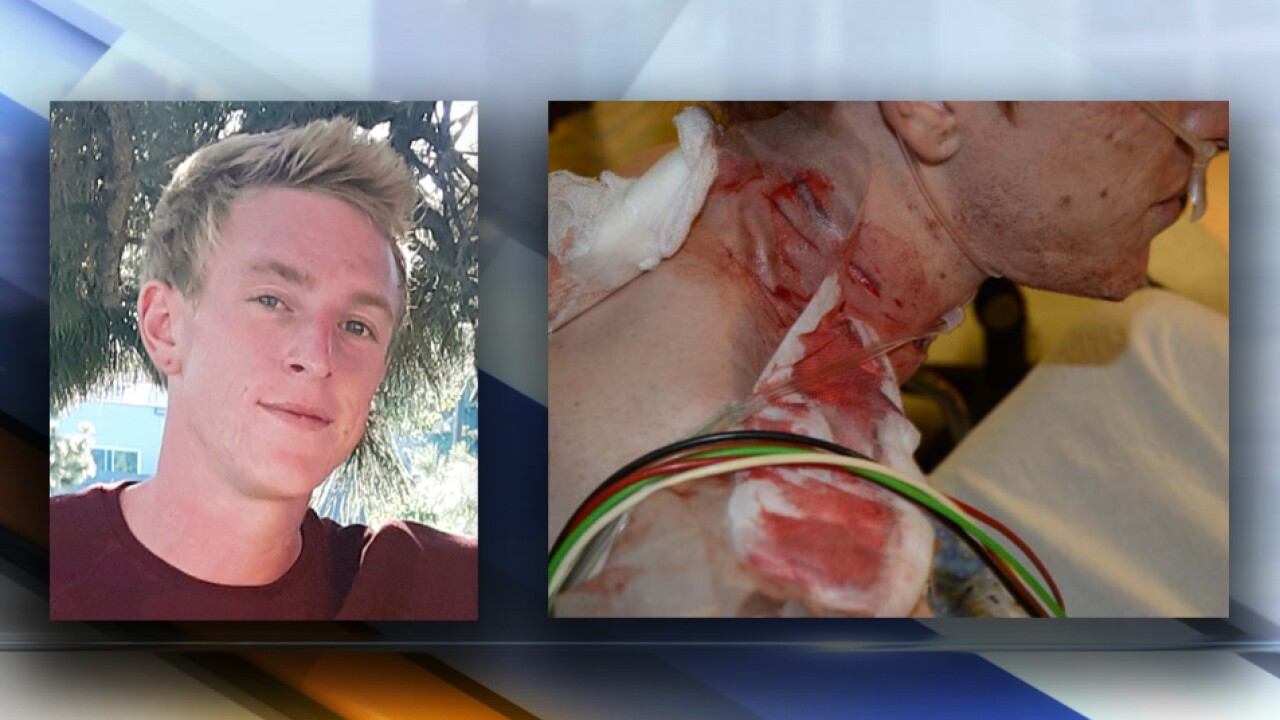 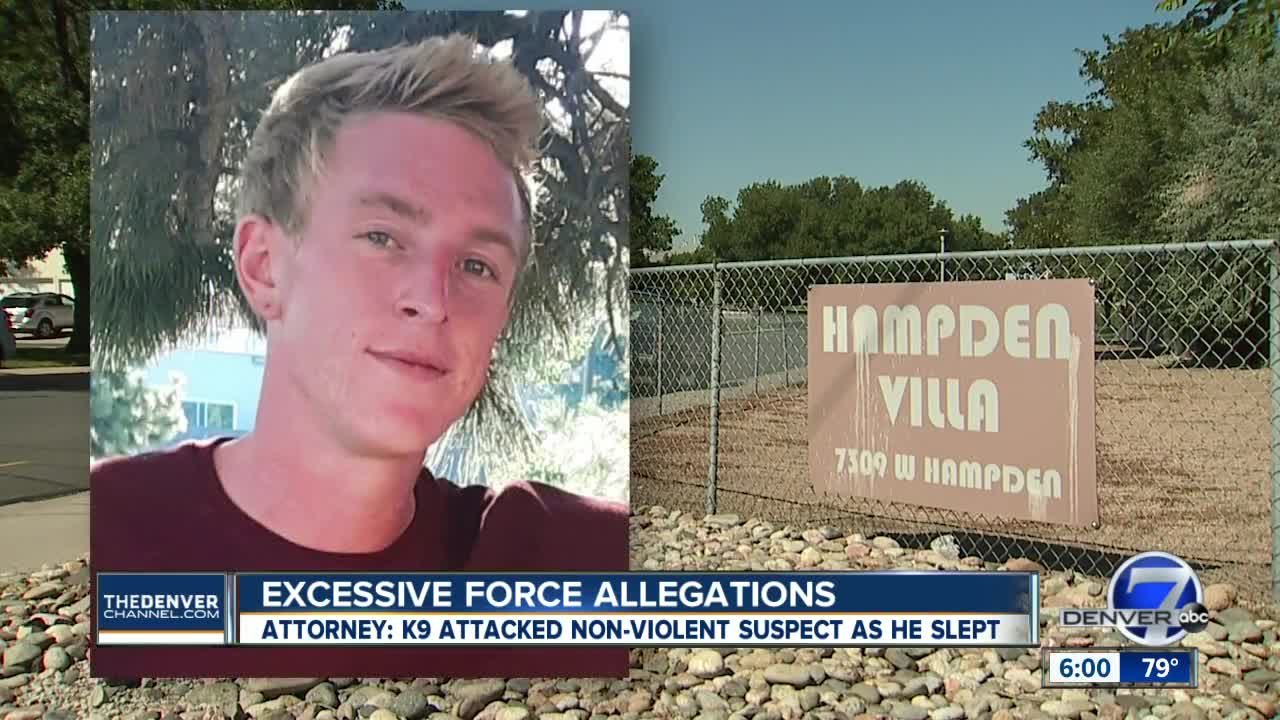 LAKEWOOD, Colo. – A 26-year-old man is suing multiple Lakewood police officers and alleging they ordered a K-9 to attack him while he slept at his home, leaving him with severe cuts across his throat that nearly killed him.

Spencer Erickson's attorneys filed the lawsuit in the U.S. District Court of Colorado in Denver on Friday.

The suit – which also alleged the K-9 had previously attacked a Lakewood officer during training – named the City of Lakewood, along with the officers involved in the incident.

The suit accused the officers of sending a K-9 into Erickson's bedroom on Sept. 21, 2018, with orders to attack Erickson.

Lakewood police declined to comment on the lawsuit Friday, saying they couldn't speak about pending litigation. A police report said the K-9's handler "could hear a male voice saying something muffled" from an upstairs area of the apartment, where Erickson's room was located, before sending the dog to search the upstairs level.

The dog went into Erickson's room, where the door was open slightly, the police report said, and the handler heard "rustling" in the room. After reaching the room, the handler could see the K-9 biting Erickson on his right shoulder as Erickson lay on his stomach, the report said. The handler tried to enter the room but the door was barricaded by a dresser.

The handler eventually forced his way into the room and found the K-9 biting Erickson "closer to the base of the back of his neck," according to the report. The handler lifted the dog off Erickson. The dog's collar slipped off but the handler said he was able to grab the dog before he bit Erickson again, the report said.

The officers were at Erickson's home to arrest him on "low-level non-violent warrants," including failing to appear in court on DUI and criminal mischief charges, the lawsuit said. The police report said he was wanted on two felony warrants: failure to appear for property damage and failure to appear for "dangerous drugs" charges.

Adam Frank, Erickson's attorney, said Erickson had no history of violence and was asleep when officers arrived.

"For reasons we can't fathom, other than this is how Lakewood told their officers to respond, they decide to respond in full force. They show up with at least six police officers and a police dog and treat this like a tactical assault," Frank said. "They had absolutely no justification for that. This dog is trained to attack. This dog's role is to find someone and bite them as hard as it can to subdue them."

The lawsuit alleged the K-9, known as Finn, was known to be a "dangerous dog" before the incident at Erickson's home. The dog had attacked an officer during training, causing the officer to miss a month of work, the lawsuit said.

The lawsuit included photos of Erickson after the attack, showing severe lacerations to his throat, cuts on the side of his neck and an injury to his shoulder.

The lawsuit said the cuts on his neck were 6-7 centimeters long and 5-7.5 centimeters deep, "resulting in exposed and lacerated muscle tissue and an exposed jugular vein."

If the cuts were just millimeters deeper, Erickson would have died, the lawsuit said. It called the attack "near murder."

Nearly a year later, Erickson continues to suffer pain and injuries from the attack, the lawsuit says, and he was diagnosed with post traumatic stress disorder.

The lawsuit said officers were called to Erickson's home about 6:30 p.m. on Sept. 21, 2018. His roommate had called 911 to report that Erickson had created a hole in the attic and that he may have drank vodka and smoked marijuana earlier in the day. She also reported to 911 that Erickson may have had an outstanding warrant.

The roommate "did not allege any violent behavior or threats" by Erickson, the lawsuit said.

Officers tried to call Erickson, but he didn't answer, and then they texted Erickson to come out with his hands up or they would send a K-9 into the home, the lawsuit said.

Erickson did not respond to the call or text because he asleep, the lawsuit said.

The officers told Erickson to "come down or the dog would be released, and [Erickson] would be bit," the lawsuit said. The dog then "viciously attacked and nearly killed" Erickson, who had been asleep before the attack, according to the lawsuit.

When officers entered the room, Erickson was on the floor and the dog was biting on his neck, the lawsuit said.

The lawsuit said the officers were not able to immediately get the dog off Erickson.

"[The officers] all agreed that they would send K-9 Finn into Mr. Erickson’s apartment and allow him to search for Mr. Erickson without supervision," the lawsuit said, "knowing that this would cause Mr. Erickson to suffer serious injury when he was bitten by K-9 Finn."

The lawsuit alleged that K-9 Finn shouldn't have been allowed to be working with Lakewood police when the incident happened. In the training incident prior to the September 2018 encounter with Erickson, the dog bit an officer "so badly" that the officer was put out of work for a month, the lawsuit said.

The lawsuit called the K-9's training inadequate, and claimed that using the dog after the attack on the officer "was so likely to result in a violation of constitutional rights," the lawsuit said.

In April, months after the incident involving Erickson, Lakewood police posted a picture of Finn on their Facebook page, with the caption: "So....anyone want to guess what Finn is thinking? Intense training day! Yes, he got his bad guy!"