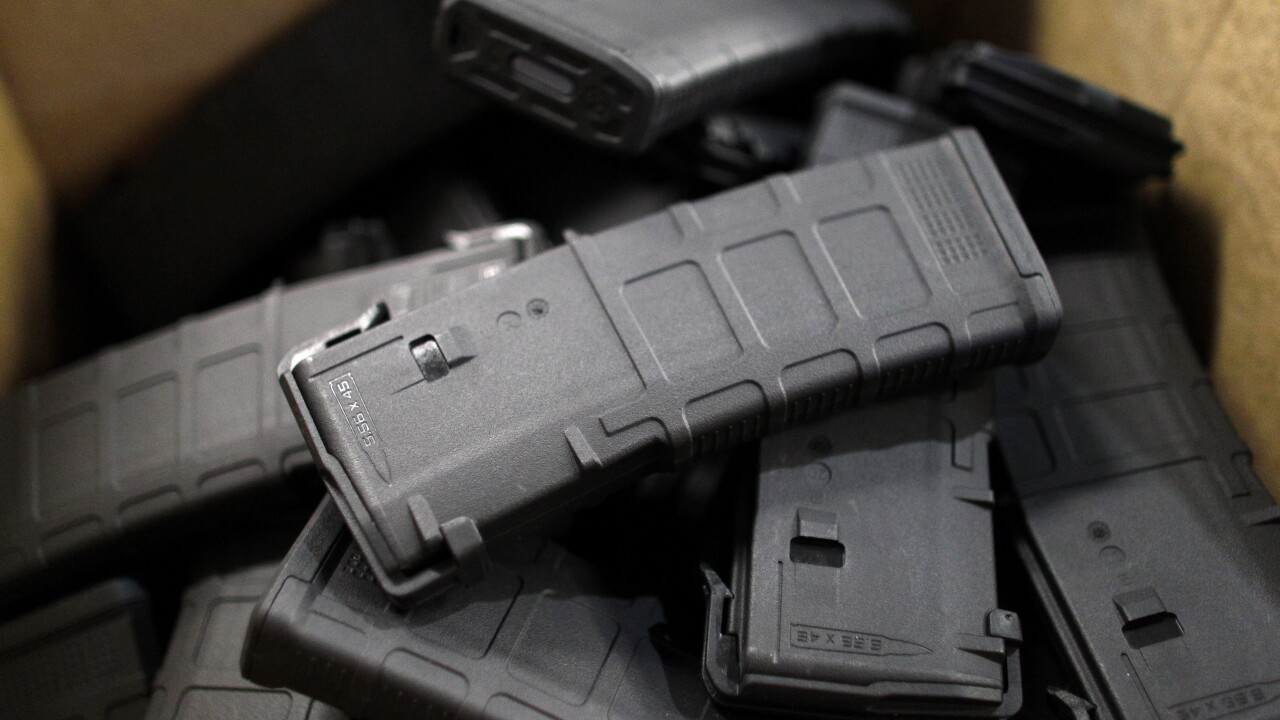 Brennan Linsley/AP
FILE - In this Feb. 28, 2013 file photo, newly-packaged 30-round capacity ammunition magazines for high-velocity rifles are stacked awaiting shipment or storage, inside the Magpul Industries plant, in Erie, Colo. Magpul, one of the country's largest producers of ammunition magazines for guns, is leaving Colorado and moving operations to Wyoming and Texas because of new state laws that include restrictions on how many cartridges a magazine can hold. (AP Photo/Brennan Linsley, File)

DENVER – The Colorado Supreme Court upheld the state’s ban on large-capacity gun magazines as constitutional in a ruling issued Monday nearly seven years after the law passed in the wake of the Aurora theater shooting.

“The legislation is a reasonable exercise of the police power that has neither the purpose nor effect of nullifying the right to bear arms in self-defense. Accordingly, the court affirms the judgment of the court of appeals,” Justice Monica M. Márquez wrote in the opinion.

Rocky Mountain Gun Owners and other gun advocates in 2016 sued over the law, which banned gun magazines that hold more than 15 rounds, in 2016, arguing that Coloradans’ constitutional right to bear arms was violated by the magazine ban contained in House Bill 13-1224, which was passed by lawmakers and signed by then-Gov. John Hickenlooper in 2013.

The law, and others related to guns in Colorado, was passed after the 2012 Aurora theater shooting, in which the shooter used a large-capacity magazine and killed 12 people.

The attorneys for the gun groups had argued that the law could be construed to “ban practically all detachable magazines,” as Márquez wrote. About half of the state’s sheriffs had filed briefs in support of overturning the ban, though law enforcement agencies are exempt from the law.

But she wrote in the court’s opinion, “We disagree. We conclude that Plaintiff’s interpretation of the definition of ‘large-capacity magazine’ is inconsistent with the provision’s plain text because it ignores the narrowing language, ‘designed to be readily converted to accept[] more than fifteen rounds of ammunition.”

“Because Plaintiffs do not challenge HB 1224 under the Second Amendment, we do not address whether the legislation runs afoul of the federal constitution. That separate question is simply not before us,” the court wrote.

Colorado Attorney General Phil Weiser said he was “pleased” by the court’s decision.

“The large-capacity magazine law will decrease the deadly impacts of mass shootings by reducing the number of people who will be shot during a mass shooting incident, and it will save lives,” Weiser said in a statement. “It also honors Coloradans’ right to bear arms for personal defense. Today’s ruling is a win for public safety and for the rule of law.”

“The only purpose of large-capacity magazines is to inflict mass casualties, and that is exactly what they have been used for across the country and in our own backyard,” said Sen. Rhonda Fields, D-Aurora, who was an original sponsor of the bill. “We need robust measures in place to end the cycle of terrorizing violence against our communities, and this law helps do just that. I am proud to have sponsored this significant piece of legislation and am committed to continuing to fight for regulations that keep us all safe.”

A district court and the Colorado Court of Appeals both previously found that the law was constitutional, so the Supreme Court’s ruling upheld the court of appeals’ ruling.

“I’m encouraged to see the Supreme Court uphold the 2013 large capacity magazine ban,” said Rep. Tom Sullivan, D-Centennial, whose son was killed in the Aurora shooting. “Gun violence has ravaged our state and our nation, and I came to the legislature to work to put an end to it. Large capacity magazines like the 100 round drum that was used on the night my son Alex was murdered can cause devastating carnage and have absolutely no place on our streets. I’ll keep working day in and day out to fight the epidemic of gun violence.”

Rocky Mountain Gun Owners Executive Director Dudley Brown acknowledged the decision did not go in his organization’s favor in a news conference Monday afternoon but argued that the court’s decision had a bright side regarding removable base-plate magazines.

He said that RMGO had no recourse to challenge the case in the U.S. Supreme Court because of the basis on which the organization sued. And while he did not entirely rule out possibly bringing a federal case in the future, he said that would be unlikely because of how long it would take to go through the courts and how much money it would cost.

But he said that the organization would continue to try to fight to repeal the ban through the legislature and trying to flip the House and Senate back to being Republican-controlled in November.

As to whether he thinks that is possible, Brown said: “I don’t know. Our job is to try and do our best.”

He said that in retrospect, he wishes the organization could have filed a state case and a federal case but added that he doesn’t know “how we would have paid for it.”

“We only have so much time, treasure and talents,” Brown said.