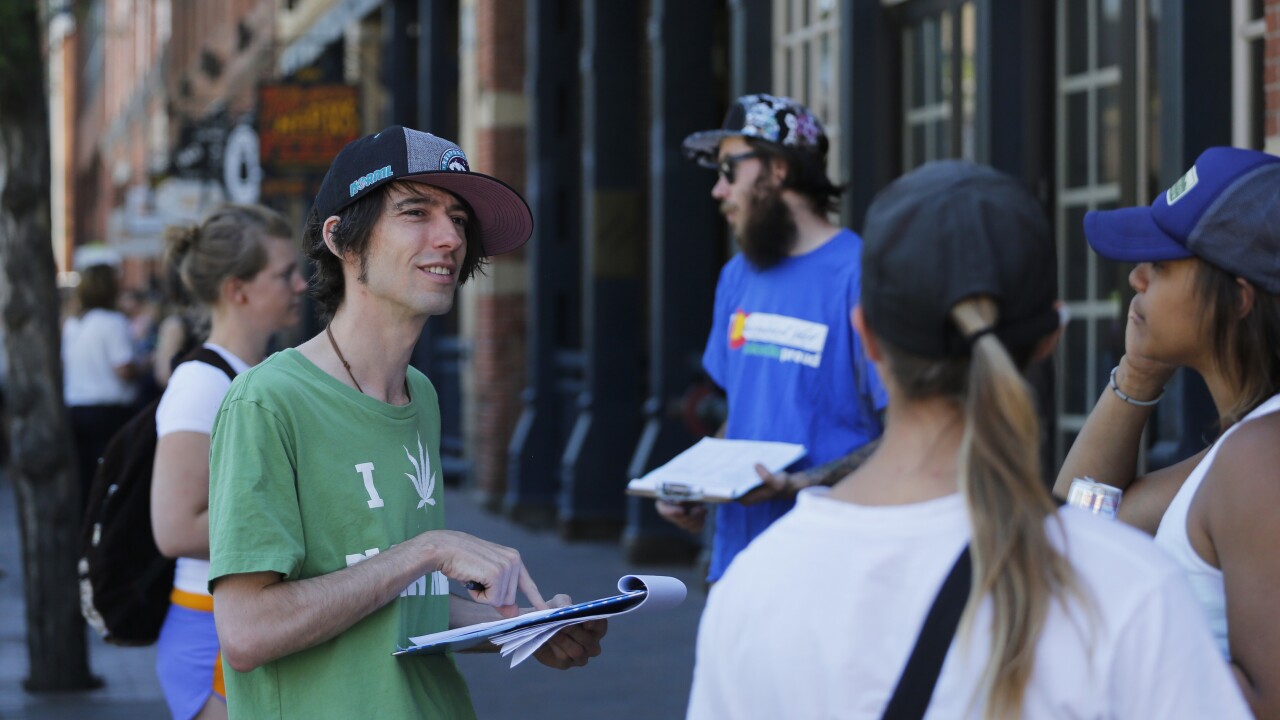 Copyright 2016 The Associated Press. All rights reserved. This material may not be published, broadcast, rewritten or redistribu
Brennan Linsley/AP
In this June 11, 2016 photo, Robert Cleary, left, a marijuana reform advocate with the group NORML, talks with passersby, gathering signatures on a petition to get a pot club initiative on the ballot in the next election, in Denver. Legal marijuana is giving Colorado a stinky conundrum. Visitors can buy the drug, but they can’t use it in public. Or in a rental car. Or in most hotel rooms. Some legalization advocates believe they have a solution - pot clubs. (AP Photo/Brennan Linsley)

DENVER – The Colorado Supreme Court ruled unanimously Wednesday that signatures for ballot initiatives cannot be gathered remotely, rejecting an executive order from Gov. Jared Polis on the basis that the governor can’t suspend constitutional requirements during a declared emergency.

“The Colorado Constitution requires that ballot initiative petitions be signed in the presence of the petition circulator,” the court wrote in its opinion. “Because that requirement cannot be suspended by executive order, the Governor is not authorized to create an exception to that requirement.”

Polis issued executive orders on May 16 allowing signature gatherers to collect signatures by mail and email and authorizing the Secretary of State to create temporary rules that would facilitate that, saying at the time that “we must not sacrifice our democracy and the right of citizens to petition due to the pandemic"

Colorado Concern filed a lawsuit quickly after the emergency order was signed. President and CEO Mike Coop at the time said that the governor’s order violated the state Constitution. The group represents about 140 chief executives from businesses across the state and is not supporting all the ballot initiatives out for signature gathering.

“Somebody has to be willing to step forward and make a defense for the constitution. That’s a position that you don’t necessarily expect to find yourselves in, but sometimes you look around and you realize if it’s not going to be you, who will it be? And so, we’ve taken this rather uncomfortable step,” Koop said at the time.

While a Denver District Court judge originally sided with the governor, saying petitioners had not met certain requirements, the state Supreme Court overturned that decision after taking jurisdiction over the appeal “because the deadline to gather signatures is fast approaching,” as the court wrote.

There is an Aug. 3 deadline for backers of initiatives to turn in the required number of valid signatures to get on the November ballot – around 124,000 this year.

Polis called the court’s decision “a blow to the power of the people of our state to petition.”

“It is certainly convenient for certain groups or elected leaders that they have to deal with fewer ballot initiatives,” he said of the ruling.

“It makes my life easier as Governor that there will be fewer curveballs coming our way, but sadly it’s at the cost of making it much harder and even dangerous from a public health perspective for activists on all sides to get their issues on the ballot for voters to decide,” Polis added.

Secretary of State's Office spokesperson Betsy Hart said that they are reviewing the decision.

"The Secretary of State’s Office, in conjunction with the Attorney General’s Office, is currently reviewing how this decision impacts the rules for signature collection," Hart said. "Our office will comply with all court orders and will continue to work with petitioners to ensure their legal access to the ballot."

The office told petitioners who were operating under the new rules that depending on how the court case ended up, signatures could be invalidated.

“Launching this litigation was a difficult choice, because there are so many important issues we are working closely with the Governor on, literally in real time. But the underlying principle was too important – protecting the integrity of the initiative process is just as important in a pandemic as it is during a time of calm,” Kopp said in a statement. “Yes, the executive has emergency powers in a public health crisis, but those powers do not come at the expense of fundamental rules that protect the integrity of our laws. We are glad the Supreme Court agreed. We’re eager to get back to work with the Governor on the many issues that unite us. Colorado is always at its best when we are working together.”