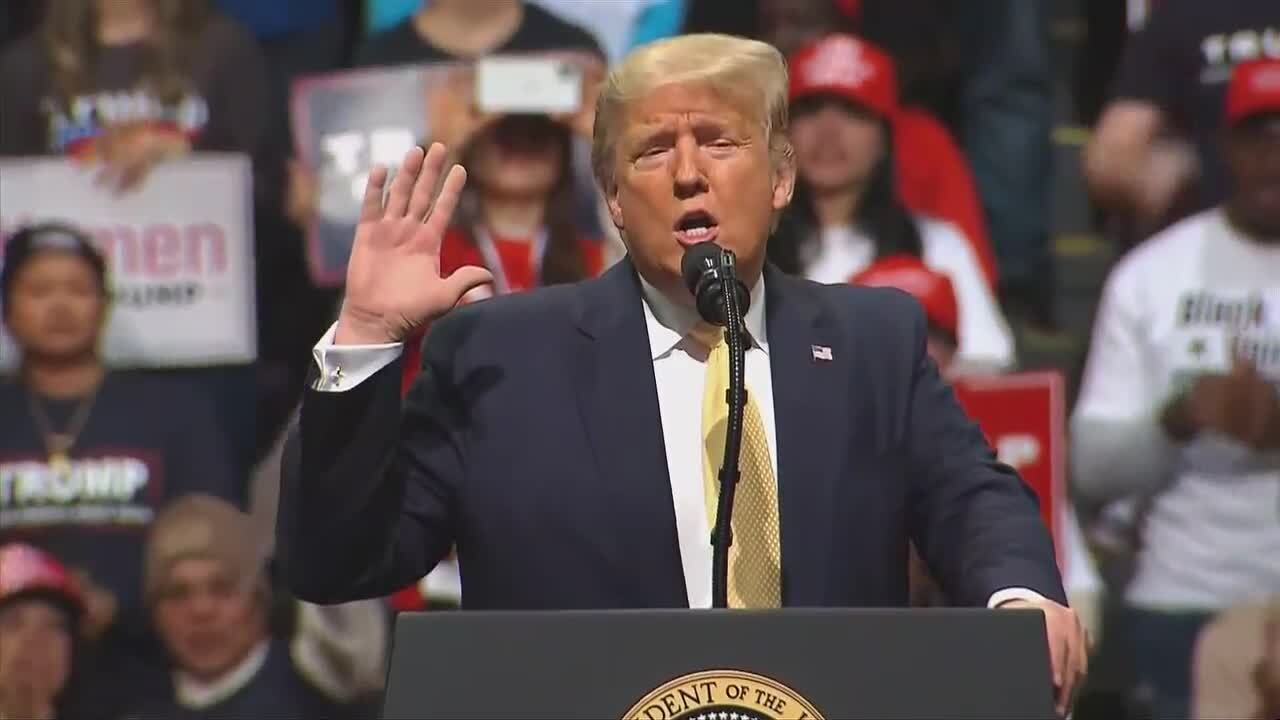 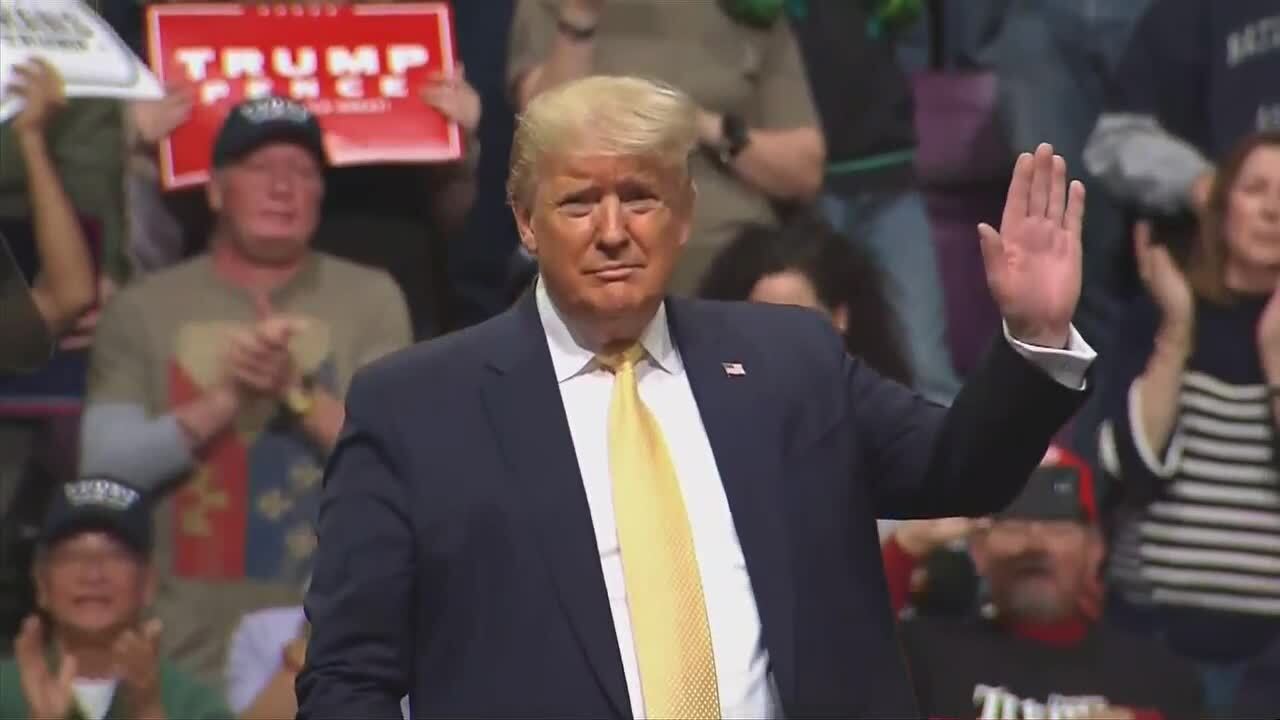 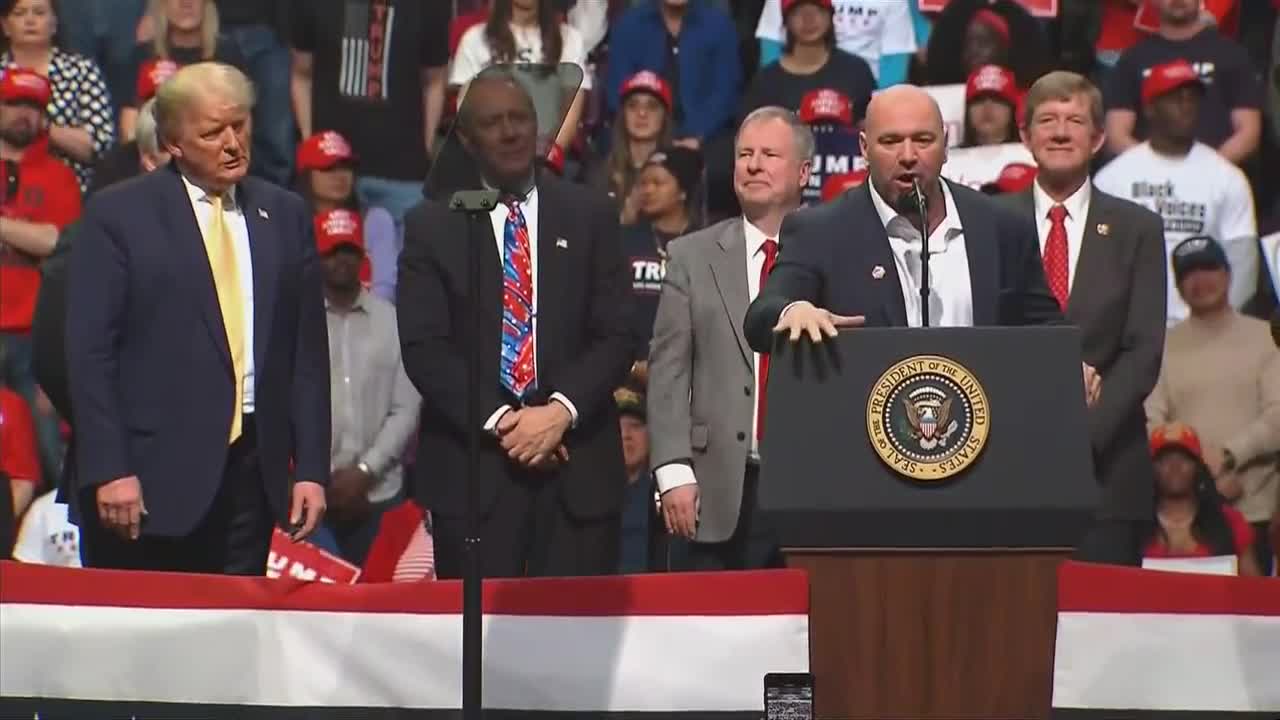 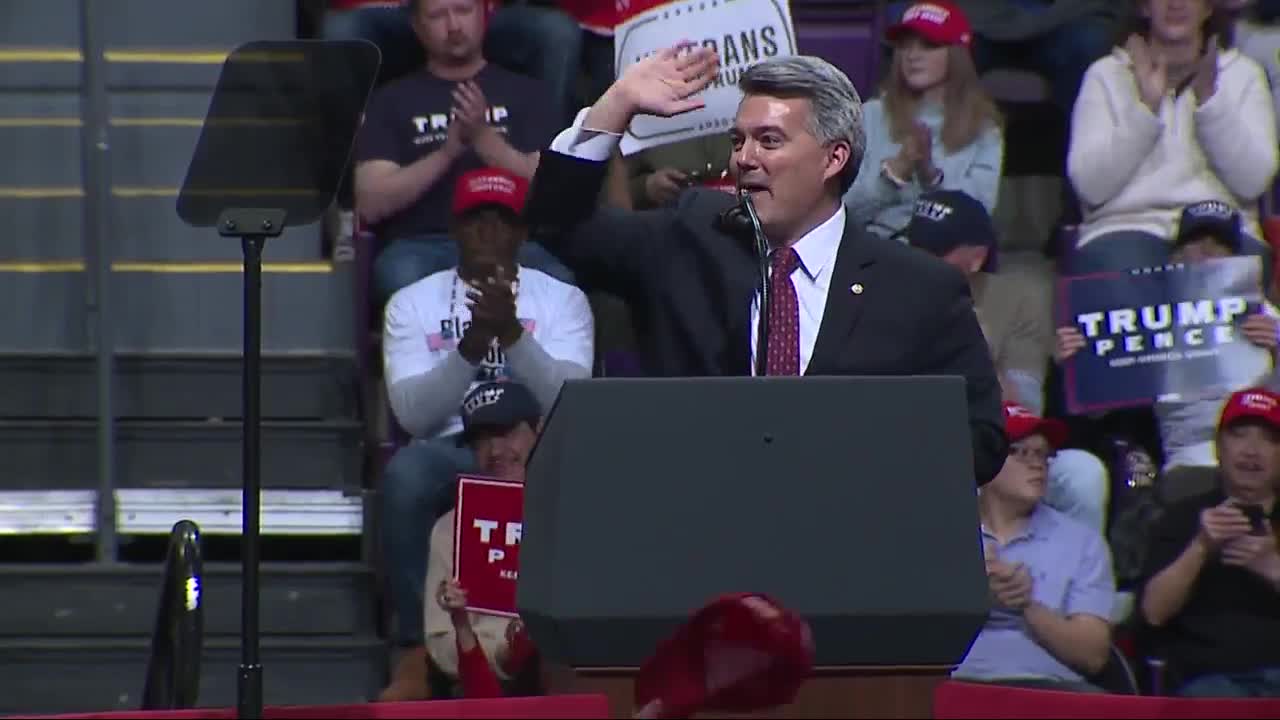 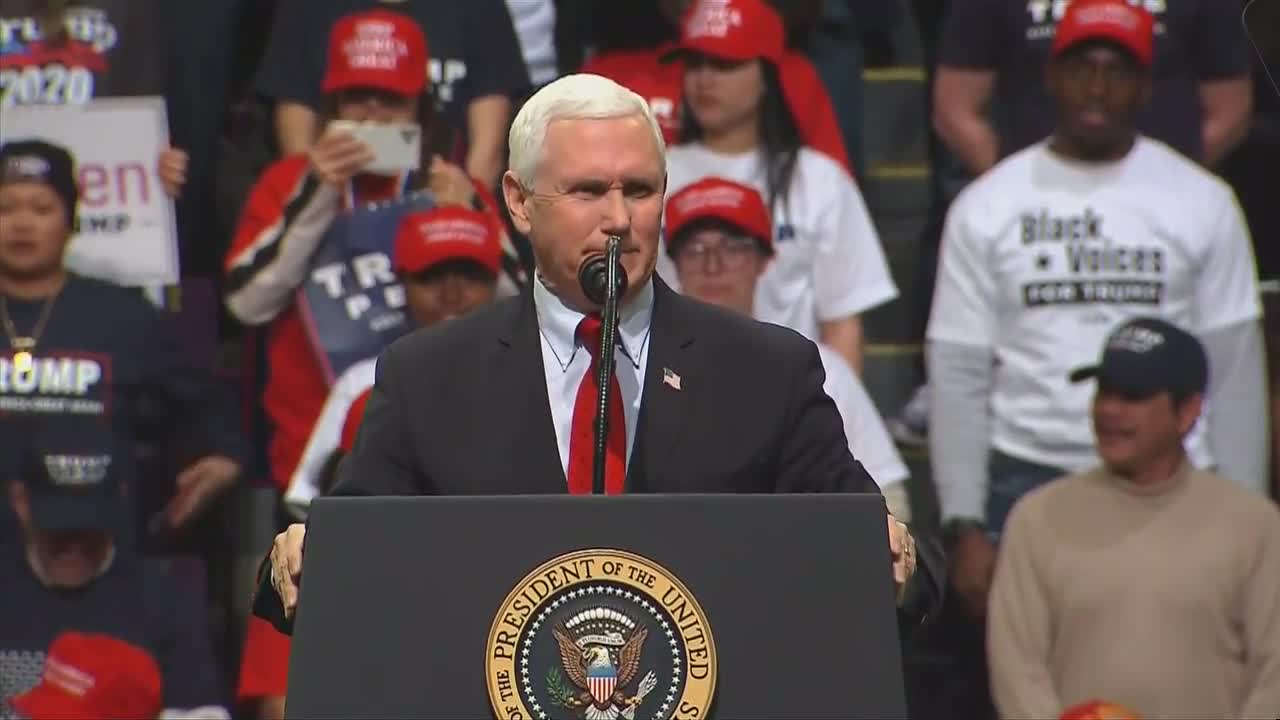 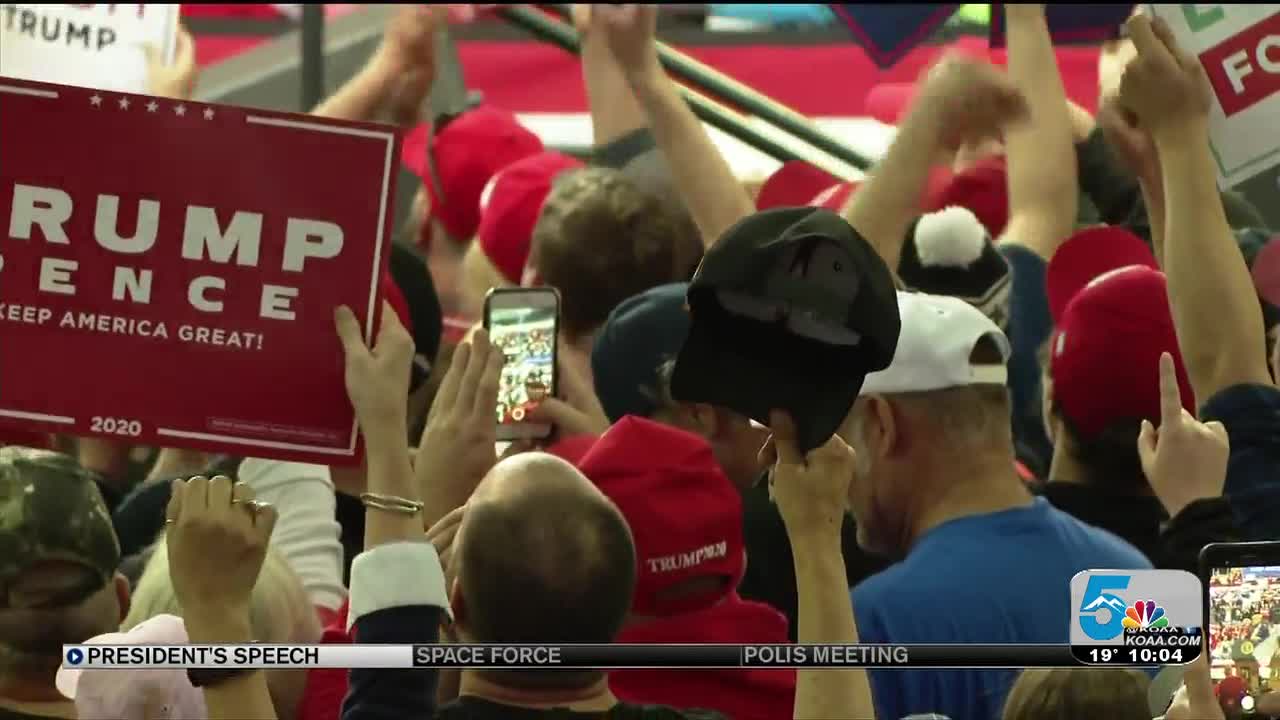 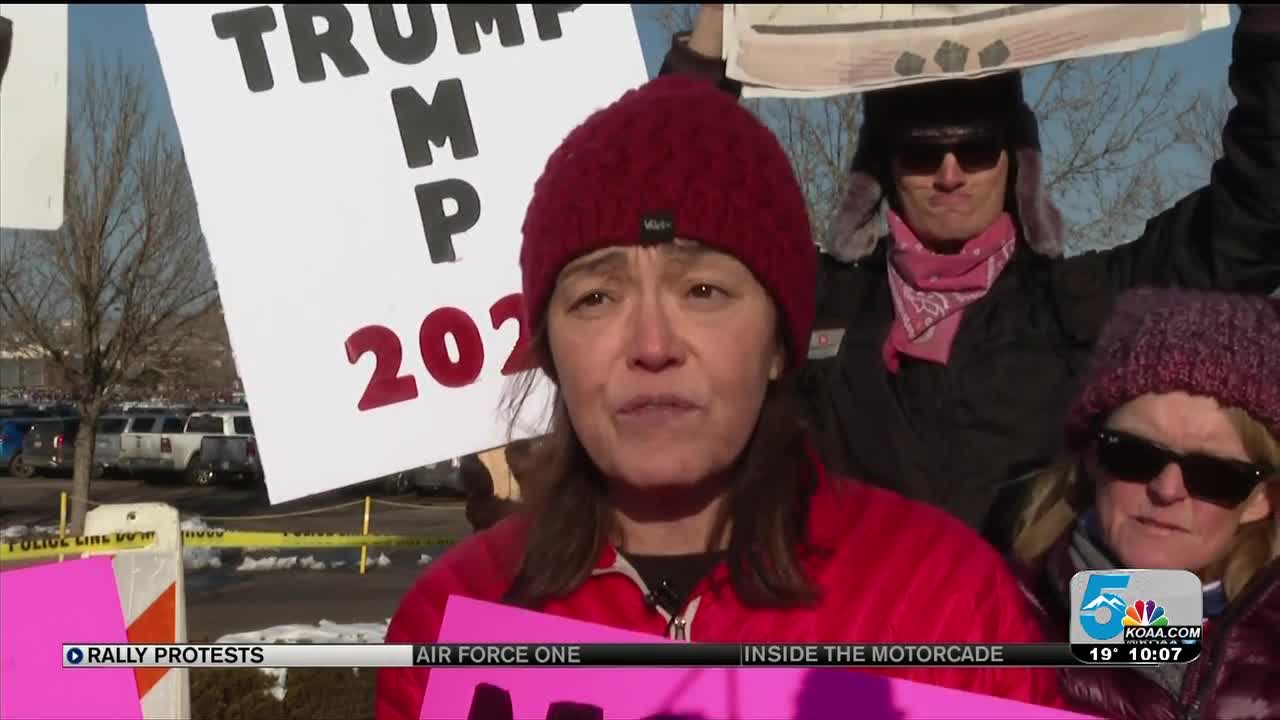 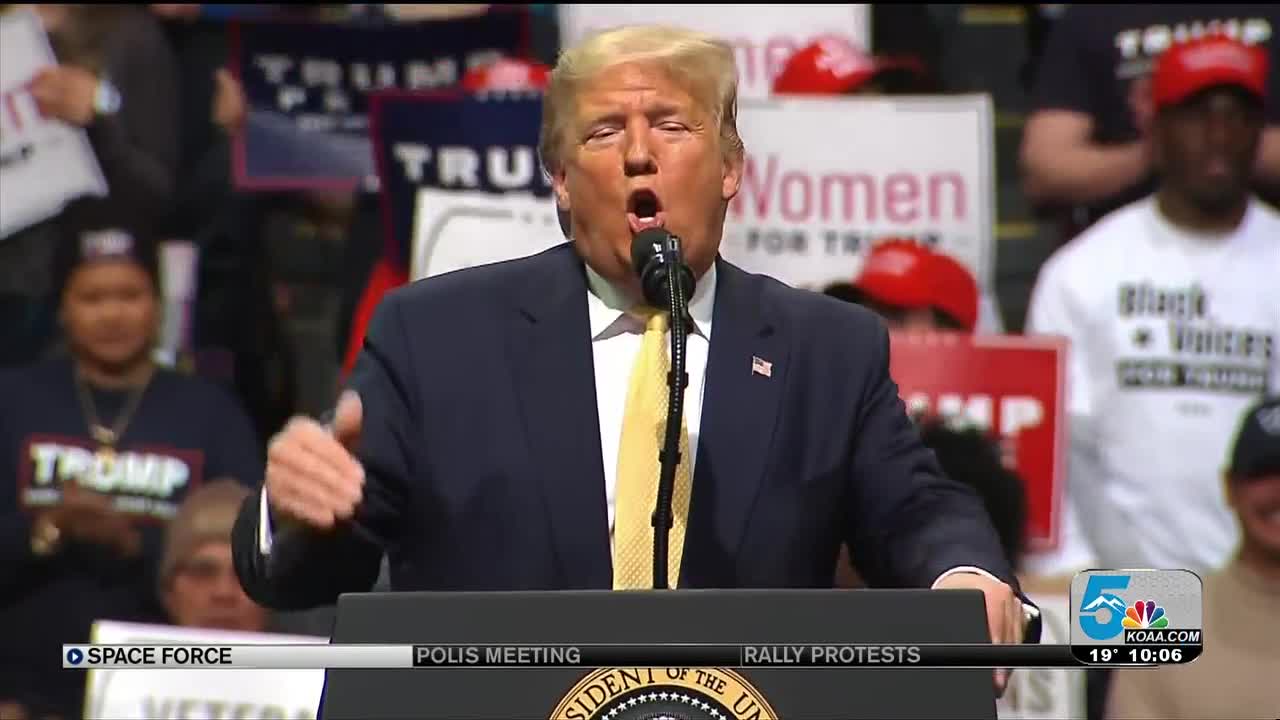 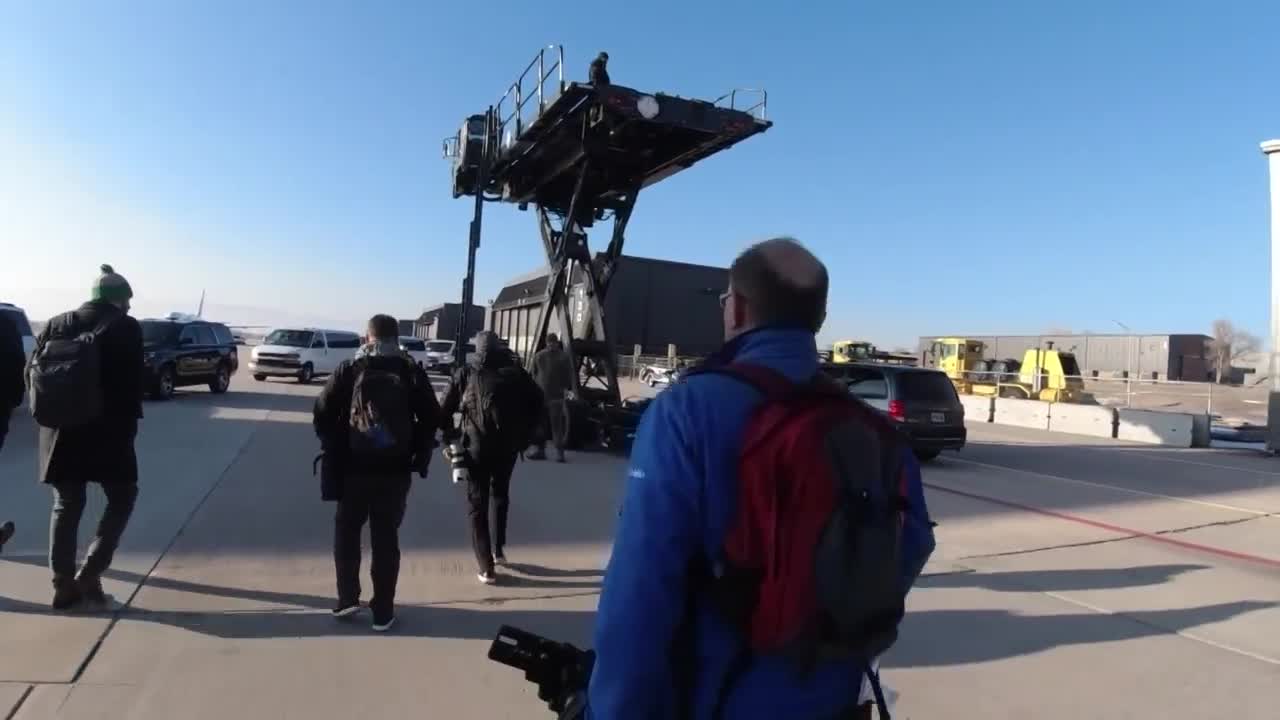 Air Force One landed at Peterson Air Force Base around 3:50 Thursday afternoon.

The president offered condolences on the passing of Donald Stratton, who was one of the last remaining survivors of the attack on the USS Arizona in Pearl Harbor.

During his speech he lashed out at Democratic opponents and touted his own record as president.

News5 asked Kayleigh McEnany, the spokesperson for the 2020 Trump campaign, about the $8 million taken from Peterson Air Force Base and diverted to help build the border wall.

"President Trump supports our military. There's no greater supporter of our military, but he's also about protecting our borders, securing the border, making sure drugs don't pour over our border, and crime, and that those who come to this country are hardworking citizens who come here the right way," McEnany said.

Meanwhile, the president spoke about ways he has expanded the military. "We are doing better than any country in the world, it is not even close. And we've rebuilt our military, we spent 2.5 trillion dollars," Trump said.

We also asked McEnany about the future of energy production in Colorado. "There's absolutely a place for coal production in this country and President Trump supports it," McEnany said.

Trump also said he is confident he will win the 2020 election, as well as the majority of votes in Colorado.

When the president landed he met with Gov. Jared Polis to talk about making Colorado the permanent home of U.S. Space Force and U.S. Space Command.

The governor was escorted on to Air Force One just after it landed to lobby the president about the decision.

During the rally the president said a decision will be made by the end of the year and that Colorado is being "strongly considered."

"But I love the Air Force Academy and you have all of the infrastructure so you're being very strongly considered for the Space Command search," Trump said.

Right now, Colorado is competing with Alabama in the Space Coast of Florida. Our Congressional delegation is also part of the push to make Colorado the permanent home.

Polis released a statement after the meeting, calling Colorado the "perfect home" for the command.

Colorado is the perfect home for Space Command and I was excited to have the opportunity to remind President Trump why that’s true,” said Governor Jared Polis. “Colorado is home to a proud military history. Not only do we have a strong community of veterans and active duty military, but our state is the epicenter for the national security and aerospace industries. We had a great conversation today about why Colorado is best and I think after his visit to Colorado Springs, the President will see that Space Command’s permanent home should once again be in Colorado. The President said he enjoyed his speech at the Air Force Academy Graduation and is strongly considering Colorado for Space Command and plans to decide by the end of the year.

Thousands of supporters lined up in the parking lot of the World Arena hoping to make it inside for the speech.

There were also vendors all around the arena selling shirts, flags, scarves, hats, and other memorabilia.

Before the president arrived it was clear not everyone in line would make it inside and many left early but said it was worth the experience.

"There's a lot of nice people. They're talking about what Trump should do and all that," Jeremiah Collins said. "It's really nice to get to meet people that are Trump supporters and want Trump back as president ... It's a lot of fun."

There was a big screen outside of the arena, where the overflow crowd watched and chanted along with those inside.

The President's rally also attracted protesters. A few hundred made their presence known outside the World Arena. The largest group lined Venetucci Boulevard where they could be seen by crowds arriving for the rally.

They were protesting several of the president's policies and also wanted to show there are plenty of Coloradans who don't want to see him elected for another four years.

"There are plenty here who are supporting a new president in the White House in November and you're not alone," one protester said.

"Let's all remember he was impeached for life. He can say that he was acquitted, but everybody knows he was impeached," another said. "We have a lawless creature in the White House. He's got to go."

A couple of protesters did make it into the rally. They were escorted out of the arena when they interrupted.

The Colorado Springs Police Department said Thursday night that some protesters were arrested outside of the Arena as well.

A statement from CSPD said most people stayed within the Free Speech Zone to peacefully protest.

But, it says, several people chose to take over the roadway and obstruct traffic at the entrance and exit to the arena at Venetucci Boulevard and Cheyenne Meadows Road.

CSPD's Public Order Response Team gave several warnings to clear the road, but the crowd did not listen.

A total of eight people were arrested and taken to the El Paso County Criminal Justice center, where they were cited for failure to desist or disperse and then were released.

News5 anchor Rob Quirk had the opportunity for exclusive access during the president's visit as one of the Pool reporters and traveled with the Presidential motorcade.

Rob and News5 Photojournalist AJ Vega went through extensive security checks to be allowed to go on the tarmac at Peterson as Air Force One landed.

They were escorted to the wing of the aircraft for an up-close, firsthand look as the president departed the plane and met with local politicians and military brass.

News5 also had access to the president and Secret Service as they held a brief meet and greet with supporters of the president who were also allowed to gather on the tarmac.

After riding through Colorado Springs to the World Arena, they emerged into the thunderous crowd of at least 10,000.