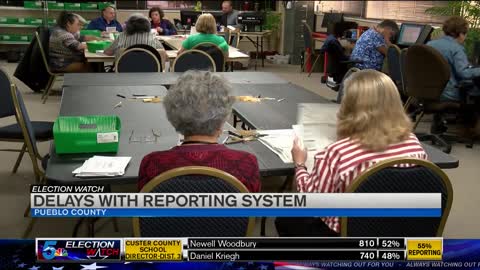 PUEBLO — Getting election results from the Pueblo County Clerk & Recorder's Office was difficult early Tuesday night. Gilbert Ortiz says his office was unable to provide an unofficial elections results sheet due to new procedures from the Colorado Secretary of State's Office.

The first information started rolling out around 8:30 p.m., about 90 minutes after polls closed statewide. It was a long night for the team in Pueblo County. Check our election results page for the latest.

Voters in Pueblo had the choice of approving a sales tax to pay for a new jail, increase the sales tax rate on marijuana sales, a mill levy to fund library improvements, and additional funds for projects in D60 schools.

Pueblo County Ballot Issue 1A asked voters to approve a .39% sales tax to pay for a new jail and other items on a wish list from public safety agencies. The total annual revenue from the tax is $9,333,000. Previous attempts asking voters to help fund a new jail have been voted down. This year, the Safety tax was not approved with 66% against.

Pueblo County Ballot Issue 1B asked voters to increase sales tax on retail marijuana from 3.5% to 6% to bring in another $2,904,000 annually. Pueblo County Commissioner Garrison Ortiz said the move was to bring tax rates in the county into line with the rest of the state.

With 80% of the vote tallied, Issue 1B is on the way to approval with those in favor holding a 55% majority.

For Ballot Issue 6B, voters were asked to approve a tax increase of $1,143,328 annually to pay for programs within the Pueblo Library District. The measure essentially extends a mill levy in place for the past 20 years. While the vote tally is no official, it appears to be on the way to approval with a majority of 59% in favor.

In Pueblo City School District 60 voters were asked if the district could increase the debt load by $218 million and taxes increased up to $19.5 million to pay for improvements to include priority repairs at all four high schools and "critical health, safety, and security concerns in other district buildings." As of Wednesday morning, 57% are in favor of the improvements.

D60 Director of Communications Dalton Sprouse says, "This vote of confidence speaks volumes to the progress our school district has made in increasing the trust our community has for us and the work we are doing to benefit the future generations of Pueblo. By passing 4A, our economy will be stimulated with new jobs for the next three to four years, Puebloans will be put to work, teachers and students will have improved learning environments, and our community will be made better because of it."

In Pueblo County Rural 70 School District voters were asked to approve a debt increase of $60 million with a tax increase of $9.55 million annually to pay for "constructing, renovating and updating all district facilities by the additions of health, safety and security improvements." With 80% of the vote tallied, voters have rejected the measure with 55% opposed.