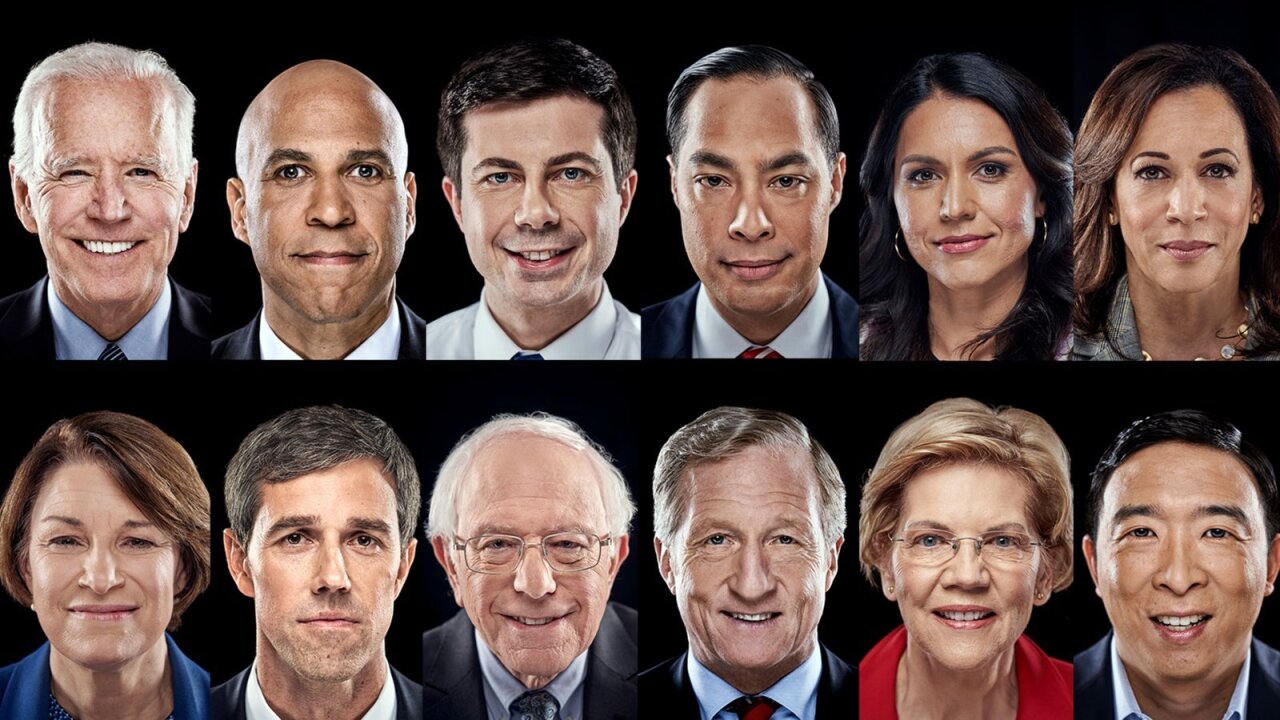 Twelve Democrats will line up in swing state Ohio on Tuesday for a crucial debate in their White House battle, which will unfold as their party gears up to consider impeachment -- the ultimate political sanction -- against President Donald Trump .

Candidates will take the most crowded debate stage in the history of US presidential primaries as their race approaches a turning point just three-and-a-half months before voters begin to weigh in.

Joe Biden heads into the showdown, hosted by CNN and The New York Times, fighting a two-front battle against his rising foe Sen. Elizabeth Warren and a President who is seeking to knock out the former vice president before he has a chance to win the Democratic nomination.

Biden is under pressure to deliver a crisp and aggressive performance after initially struggling to fend off Trump's claims that his son Hunter's business activity in Ukraine while he was vice president is a symptom of family corruption. There is no evidence of wrongdoing by Biden or his son in Ukraine.

The Delaware Democrat tried to turn the issue against Trump in an aggressive new pre-debate strategy, by unveiling an anti-corruption plan that he said would ensure that "no future president can ever again abuse the office for personal gain."

This will be the first Democratic debate since the party launched a bid to impeach the President over claims that he abused his power by pressuring Ukraine to investigate Biden. The evening will allow Democrats to make their broadest case yet against Trump's suitability for a second term, given the uproar over his decision to desert America's Kurdish allies in Syria and withdraw US troops, triggering a humanitarian crisis.

The debate is also crucial for 78-year-old Sen. Bernie Sanders to show that he is fit for the long haul and potentially to be president after a heart attack raised questions about his age.

Time is running out for candidates like Sen. Kamala Harris of California, South Bend, Indiana, Mayor Pete Buttigieg and Sen. Cory Booker of New Jersey to prove they are a threat for the nomination. Lower-polling candidates like Sen. Amy Klobuchar of Minnesota and former Housing and Urban Development Secretary Julián Castro need to make a splash to keep voters -- and donors -- interested as they struggle to qualify for November's debate.

Businessman Tom Steyer will make the debate stage for the first time. And the showdown will give new oxygen to entrepreneur Andrew Yang, whose unorthodox campaign has turned in impressive fundraising and is outpacing several full-time politicians.

Warren chases down Biden in the polls

Biden has been the front-runner for months, but the race is tightening as it enters a pivotal new stage, with Warren cresting in polls after an impressive summer leading the party's policy debate.

Latest polling shows the senator from Massachusetts closely matched with the Delaware veteran in the national race and in three of the four early-voting states: Iowa, New Hampshire and Nevada. Biden, with his strong edge among African American voters, has a more comfortable lead in South Carolina, although the primary there could be reshaped by what happens in the early contests.

Biden heads into the debate with a pressing need to communicate to the American people that there is no evidence that his son did anything wrong, despite Trump's repeated and unfounded claims of massive corruption and his disinformation campaign.

Biden's rivals have been largely supportive amid Trump's searing attacks but have not been above questioning a potential conflict of interest posed by Hunter Biden's foreign business ventures at a time when his father was vice president.

Hunter Biden announced on Sunday that he would swear off all jobs with foreign-owned businesses if his father wins the presidency next year, an apparent bid to defuse the issue.

But Joe Biden's camp will be worried about the outcome of Hunter Biden's interview with ABC News due to drop hours before the debate, which could focus on his complicated personal and professional life.

The best bet for the former vice president may be to turn the controversy -- the latest holdover from his long political past to torment his campaign -- into a full-frontal attack on Trump.

Biden last week issued a full-throated call for Trump's impeachment -- apparently deciding that his more circumspect earlier position was increasingly out of touch with polls that show more and more Americans in favor of the investigation.

On the eve of the debate, however, a new Quinnipiac University poll showed that Warren is making some progress on that question of who has the best chance to bet Trump.

Some 48% of voters say Biden is the best bet, but Warren has increased her support on this measure from 9% in August to 21% currently.

But her new status as near co-front-runner comes with fresh pressures. In the earlier debates, other candidates have been more keen to target Biden than her.

Considering she bills herself as the candidate with a plan for everything, Warren's lack of specificity on how to pay for her health care proposal is an obvious target for her rivals.

Some analysts see the omission as a device to allow her to track more to the center in a general election after avoiding alienating liberal voters who want a single-payer health care system and to abolish private insurance.

Addressing the health care system -- perhaps the most important issue for progressive voters -- could offer an opening for Sanders, who is keen to reestablish himself as the dominant liberal in the race.

He hinted at a more aggressive approach toward Warren in an interview with ABC News' "This Week on Sunday."

"There are differences between Elizabeth and myself," he said.

"Elizabeth, I think, as you know, has said that she is a capitalist through her bones. I'm not."

If Sanders is to win the nomination he will need to check Warren's momentum, amid signs she has eclipsed him after he put issues like economic inequality, "Medicare for All" and corporate responsibility at the top of the Democratic agenda in his 2016 presidential bid.

The split between the left and centrist elements of the Democratic Party will again reveal itself if Biden seeks to check her rise.

The former vice president, who says his decades in the Senate equip him to work with Republicans to get changes into law, took a veiled shot at Warren in New Hampshire last week, warning that "it takes proven ability to get things done. We're not electing a planner."

Time running out for the pack

Tuesday's debate is not the last chance for candidates outside the top three to elbow their way into the race. But time is running out.

Harris, for example, says she has "virtually moved to Iowa," staking everything on a strong showing at the caucuses that would allow her to mount a run deep into the Democratic race.

Apart from a memorable debate clash with Biden over the summer, the former prosecutor has failed to live up to the high expectations for her campaign. But she said over the weekend that voters were still a long way from deciding who to support.

"Of course, there are a number of people who are on the stage who have been on the stage for, in some cases, decades," Harris said.

"And I think that speaks volumes about the fact that people are still interested in getting to know everyone before they make a decision."

Buttigieg has been running a quietly impressive campaign, and bumper fundraising could set him up for a possible late surge into the caucuses. But he needs to dispel impressions that his youth -- he is only 37 -- means he lacks the necessary experience to be president.

For several of the remaining candidates, Tuesday's debate could be their last, given tightening criteria for entries into future showdowns.

Omission from November's debate could effectively choke off a candidate's visibility and fundraising and make it impossible for them to mount a realistic challenge.

Castro, Rep. Tulsi Gabbard of Hawaii, Klobuchar and former Rep. Beto O'Rourke of Texas are all on the cut line.

There's no better way for those candidates to engineer the big moments they need than to tangle with one of the front-runners.

So that could mean several high-risk moments for Biden and Warren -- even if for now, their best interests do not include taking on one another in a fight to the finish.