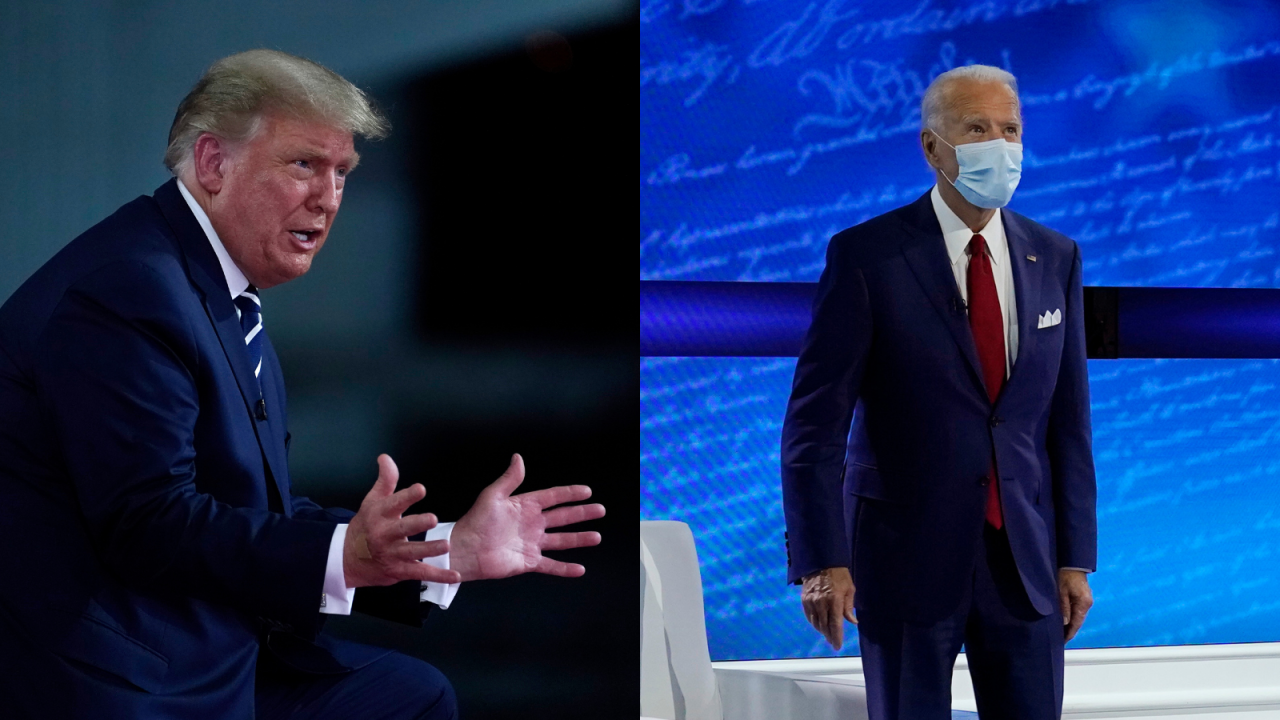 While Election Day is still 19 days away, voters were already forced to make a decision on Thursday: Donald Trump or Joe Biden.

While the decision will not show up on an official ballot or election, the choice Americans were forced to make was on which presidential town hall to watch.

While having debates on competing networks might have made things challenging for swing voters, there are not many undecided voters left, according to polls. In a national poll released by "The Hill" yesterday, the survey found that 7% of voters remain undecided.

On one network, Joe Biden calmy responded to questions from a socially-distanced audience in Pennsylvania. Meanwhile, President Donald Trump sparred with NBC News host Savannah Guthrie in a competing town hall there.

The dueling town halls were held in lieu of a traditional town hall debate. The debate was scrapped after the Commission on Presidential Debates said that tonight’s debate would be held virtually. Trump opted out of a virtual debate, prompting Biden to schedule a forum on ABC News. Yesterday, Trump announced he too would hold a network-televised debate, this time on the NBC family of networks.

Trump and Biden plan on debating next week in person for the final time. Biden said he would like to see Trump tested for the coronavirus at the next debate.

“Yeah," Biden said when asked if Trump should be tested. "By the way, before I came up here, I took another test, I've been taking it every day, the deep test, you know, the one, they go in both [noses]. Because I wanted to be able to — if I had not passed that test, I didn't want to come here and not expose anybody."

White House press secretary Kayleigh McEnany originally stated that Trump was tested multiple times a day. But Trump has acknowledged that he wasn’t tested every day, and said during Thursday’s town hall he was unsure when his last negative test was before announced he was infected with the coronavirus on Oct. 2.

“I don't know, I don't even remember,” Trump said. “I test all the time. I can tell you this. After the debate, like, I guess, a day or so, I think it was Thursday evening, maybe even late Thursday evening, I tested positive. That's when I first found out,

While Biden answered questions on tax policy, Trump responded to a New York Times story on his personal taxes, and was pressed on details that he reportedly owes $400 million in taxes in the coming years.

Biden was pushed on whether he would raise taxes amid a pandemic and higher unemployment.

“When I said the Trump tax cuts, about $1.3 trillion of the $2 trillion in his tax cuts went to the top one tenth of 1%,” Biden said. “That’s what I’m talking about eliminating. Not all the tax cuts that are out there.”