Prop. 113: Colorado's role in the National Popular Vote Compact is on the line for voters to decide 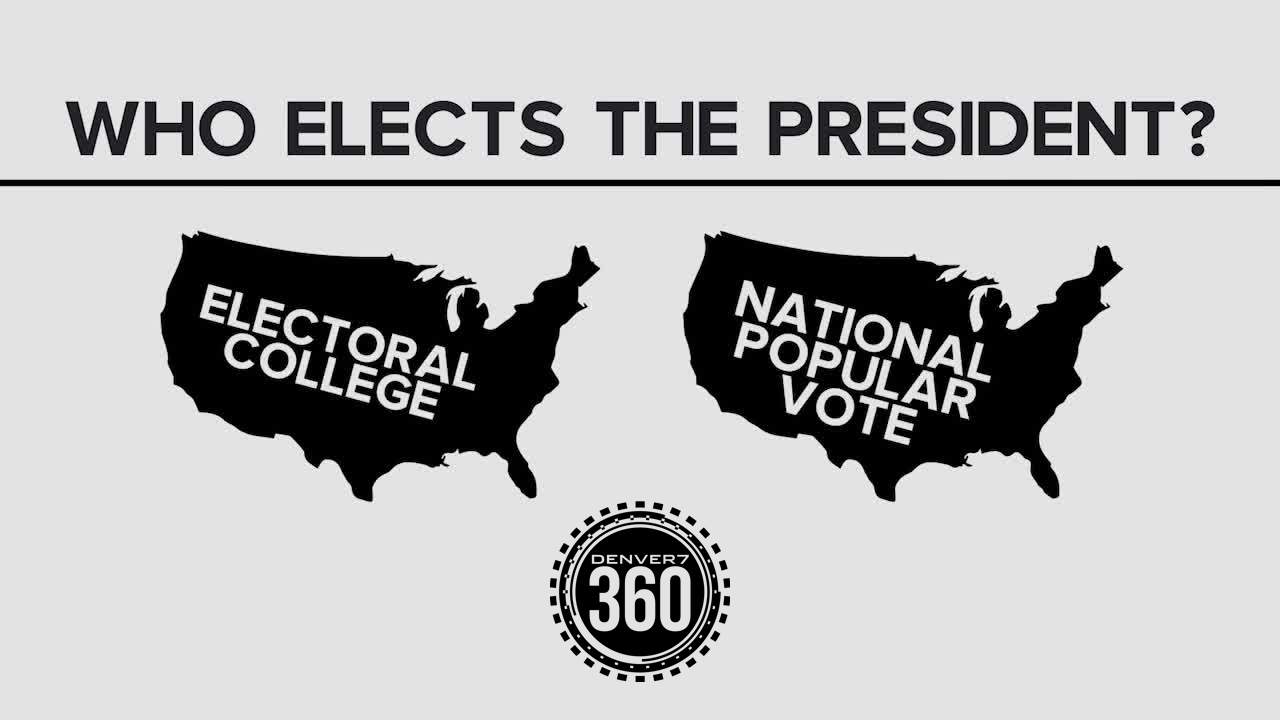 Denver7
On November 3, voters in Colorado will have a chance to weigh in on the state’s involvement in the National Popular Vote Interstate Compact. 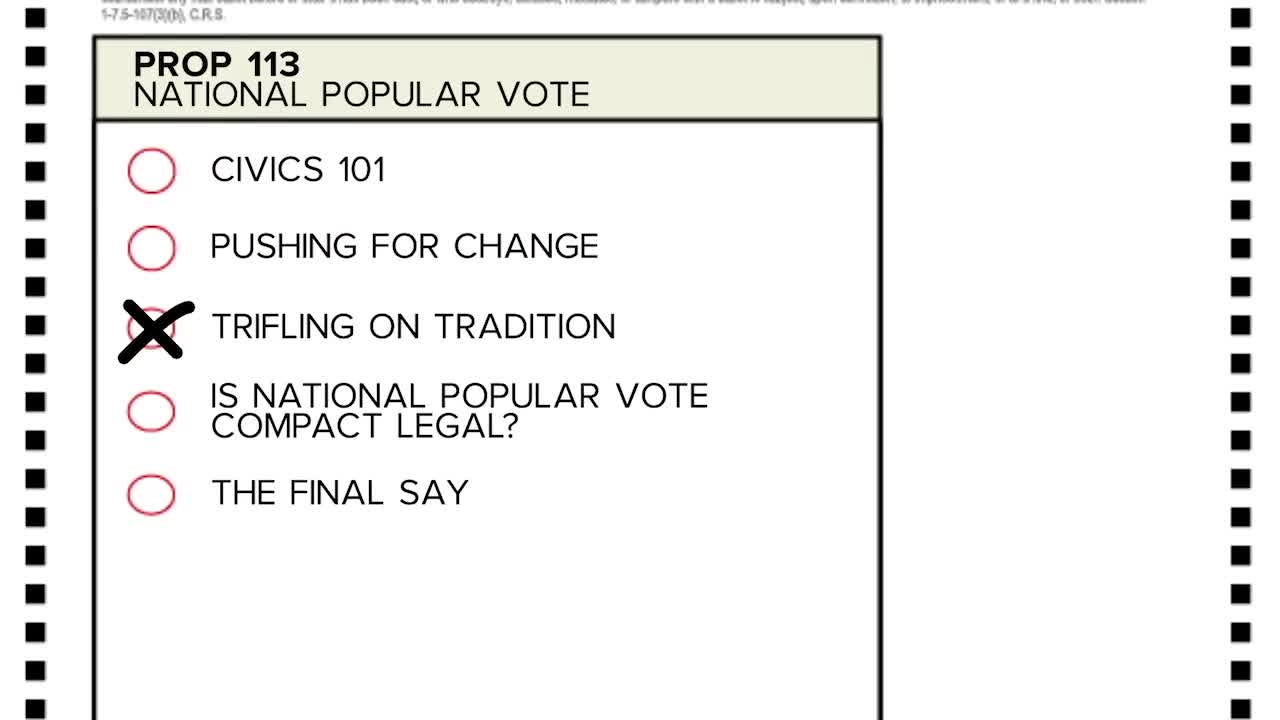 On Nov. 3, voters in Colorado will have a chance to weigh in on the state’s involvement in the National Popular Vote Interstate Compact.

Last year, Colorado’s legislature passed a bill to sign the state onto the compact along with 14 other states and the District of Columbia.

But this year, opponents of the idea were able to garner enough petition signatures to put a referendum on the ballot for voters to have the final say.

Refresher course: How presidents are picked

Under Article II, Section 1 of the U.S. Constitution, an Electoral College picks the president and vice president. Electors are given to states depending on their population sizes.

State legislatures are allowed to decide how to award those electors to a candidate. Colorado and 47 other states are considered winner-take-all states, meaning whichever candidate Coloradans cast the most ballots for earns all nine of the state’s electoral votes.

There are 538 electoral votes up for grabs total and a candidate needs a majority of them, or 270, to win the presidency.

Electors cast their ballots for the president in December.

What is the National Popular Vote Interstate Compact again?

The National Popular Vote Interstate Compact was created in 2006 and is an effort to ensure that the candidate who wins the popular vote in the country becomes president.

The compact requires enough states to sign on to it to equal 270 electoral votes before it kicks in.

However, Colorado’s voters could decide to remove the state from the compact, removing its nine electoral votes from the tally.

A look at history

There have been five times in American history where the winner of the popular vote lost the election because of the way the Electoral College votes were split.

In 1824, Andrew Jackson won the popular vote by nearly 39,000 votes over John Quincy Adams but did not earn enough electoral votes to win the presidency outright, so the House of Representatives decided who won the presidency.

In 1876, Democrat Samuel J. Tilden beat Rutherford B. Hayes in the popular vote by roughly 254,000 ballots but lost the presidency.

The case for the NPV Compact

Along with the five cases in which the winner of the popular vote lost the presidency, Colorado State Sen. Mike Foote, D-Boulder, who helped craft the bill to add Colorado to the compact, says there have also been several close calls.

“There’s been a number of so-called near misses where it almost happened — most recently in 2004, and also there was one in 1976,” Sen. Foote said. “So, as we go forward and less and less states are actually in play in the presidential contest, we’re going to have more results like what we had in 2016 or at least near misses each time.”

Supporters of the National Popular Vote Compact say it will add more fairness to elections to ensure that every vote counts.

“I think [it's] the single most important reform that we can implement to our democracy and a republic at the state level,” said Sen. Foote. “One person should always equal one vote, no matter where that voter lives and no matter what the election.”

He believes the winner of the popular vote should always go on to become president no matter of which party they are a member.

Despite the fact that in four of the five instances where the winner of the popular vote lost the presidency, Sen. Foote doesn’t think this will benefit one party over another.

Supporters also believe that the national popular vote will fundamentally change the way campaigns are run.

“I think it incentivizes candidates. They’d have to run their campaigns differently, no doubt. The vast majority of the visits go to the swing states,” said Holly Monkman, of the League of Women Voters of Colorado.

She pointed out that during the 2016 campaign, presidential candidates focused most of their attention almost exclusively on a handful of swing states and didn’t visit roughly 24 states during the election at all.

Colorado has not been considered a swing state for the presidency in recent elections.

She believes adopting the compact could force candidates to broaden out their campaigns beyond a few key states to bring their policy goals to every state and every voter.

“Coloradans are now being ignored under the current system and will continue, going forward, being ignored,” Sen. Foote said.

Monkman also believes changing to a national popular vote system would increase voter turnout — particularly in states not considered to be swing states, since their votes would be counted toward the overall tally.

“If you live in a safe state but you’re a member of the other party, then your vote is left at the state boundary. It never makes it into that final tally,” Monkman said. “For example, in 2016, Hillary Clinton won the popular vote within our state and was awarded all nine electors. Over one million people voted for Donald Trump, but they received zero electors.”

She believes the change would move the country more toward a representative government.

The case against the NPV Compact

Those opposing the idea of the National Popular Vote Interstate Compact say it flies in the face of the U.S. Constitution, goes against what the Founding Fathers intended and undoes a more-than-200-year tradition of how presidents are picked.

“It’s a bad idea. It would turn us into a country that is driven by mob rule,” said state Sen. Paul Lundeen, R-Monument. “There’s enormous gravity in this conversation because it would change the way for 244 years the United States has chosen to govern itself.”

Fountain and Monument have already passed resolutions opposing the law. Monument’s mayor was one of the organizers of the referendum initiative.

While every other elected official in the United States Congress and Senate is chosen by the one person, one vote system, Sen. Lundeen says the Founding Fathers purposely stayed away from that idea for the role of president and vice president in order to provide checks and balances to the system.

“The Founding Fathers we believe got it right with the Electoral College with a representative process because we are a republic and not a straight democracy,” said Mesa County Commissioner Rose Pugliese, a Republican.

She and Lundeen say they are worried that states with larger populations could overrule smaller states to pick the president, and that places like Colorado would be ignored.

Along those lines, opponents believe moving to a popular vote would cause campaigns to simply shift their focus to the states and cities with the biggest populations, ignoring the rest of the needs of the country.

“What will happen over time is campaigns will go strictly and only with all of their concentration and effort will go into the urban centers,” Sen. Lundeen said.

Beyond that, opponents of the compact point out that even if every single Coloradan were to vote for the same candidate for president but the majority of Americans chose the other candidate, all of the state’s nine electoral votes would be awarded to the winner of the national popular vote.

“We absolutely believe that Colorado should be in control of our Electoral College votes. It’s really important not just for our state, but for the entire country,” Pugliese said.

There are also worries that the compact could be challenged in court for its constitutionality and, if enough states sign on, that it could erode voter confidence in elections and open the door to fraud.

“I think there is some potential for not just voter fraud, but for the election to be held up because there is some discrepancies in an election in one county that holds up the whole presidential election,” Pugliese said.

The opponents say they had bipartisan support and collected hundreds of thousands of signatures to block this, so they are confident voters will keep the current Electoral College rules in the state in place and vote no on Proposition 113.

Even before enough states sign on to the NPV Compact for it to kick in, critics are threatening to take the idea of a national popular vote to the courts.

Nancy Leong, a professor of law at the University of Denver Sturm College of law, says there have been instances of states signing onto compacts like this in the past and that the U.S. Supreme Court has upheld them.

“There are agreements among two or more states all the time. I think water rights are a good example,” Leong said. “This is not something that’s new and exotic, it’s something that’s pretty commonplace. It’s just never been tried in the context of national electoral politics before.”

Because of the fact that the U.S. Constitution leaves it up to states to decide how to divide their Electoral College votes, Leong doesn’t believe that there are grounds for a constitutional challenge.

Earlier this year, the U.S. Supreme Court reaffirmed states’ rights in determining how electoral votes are decided. Two cases, including one from Colorado, posed the question of whether faithless electors were allowed to exist or whether states can compel electors to vote a certain way.

The Supreme Court justices concluded that states can determine how electors are divided among candidates.

However, if a state signed on to the compact and then decided to go against it when it came down to casting its electoral votes, a lawsuit would be possible.

The state legislature already voted to add Colorado to the list of states signed on to the National Popular Vote Interstate Compact.

But voters will get the final say on whether Colorado remains part of that compact. A yes vote means Colorado will join the compact and a no vote means it won't.

Proposition 113 will not affect the outcome of the 2020 presidential election, but it could fundamentally change the way elections are decided moving forward if enough states sign on.