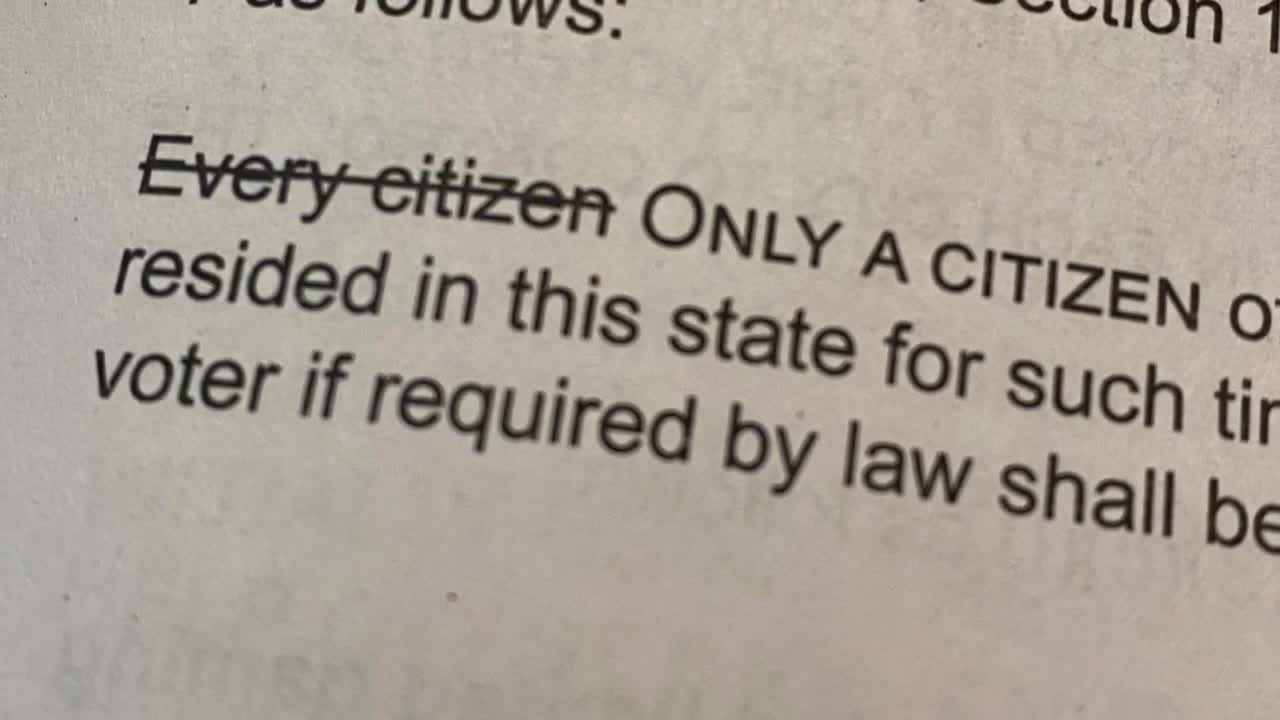 Of the many ballot measures Coloradans will be voting on this November, Amendment 76 seems like the simplest to understand.

MORE: Colorado election 2020: A guide to navigating the 11 statewide initiatives on this year's ballot

The amendment asks whether voters would like to change the wording in Article VII Section 1 of the Colorado Constitution, which reads, “Every citizen of the United States who has attained the age of eighteen years, has resided in this state for such time as may be prescribed by law, and has been duly registered as a voter if required by law shall be qualified to vote in all elections.”

Amendment 76 proposes to change the wording from “every citizen” to “only a citizen” in the constitution.

The case for making the change

Supporters of Amendment 76 believe there is some ambiguity in the way the Colorado Constitution reads that needs to be cleared up.

“If you look at the dictionary, a citizen is someone who resides in a city or town or municipality. That doesn’t comport with the original intent of the constitutional language,” said Joe Stengel, the registered agent for the Yes on Amendment 76 campaign.

Stengel admits that noncitizens are currently not allowed to vote in elections, but says this will help clarify the language for the future.

“Because of the new way things are looked at today, citizenship is being expanded to people who are not citizens of the United States as to their ability to vote in elections. So, we are trying to make the language tightened so it’s very understandable what the framers of the constitution of Colorado and the United States intended,” Stengel said.

Supporters argue this will guarantee that the state will not try to pursue policies that allow noncitizens to vote and provides additional constitutional protections.

“Voting is a fundamental right that’s reserved and enshrined to either native citizens or naturalized citizens, and noncitizens shouldn’t have that right or the ability to vote in an election,” he said.

The Blue Book analysis for Amendment 76 said that it’s unclear whether this measure would apply to cities or towns with home rule charters. Home rule allows those municipalities to create some of their own rules when it comes to voting in local elections.

Colorado has more than 100 home rule municipalities across the state.

Stengel and supporters of the change insist this will apply to all federal, state and local elections and say recent court cases have already decided the issue of home rule.

The case against making the change

Opponents of Amendment 76 say the change to the Colorado Constitution is divisive and aims to solve a problem that doesn’t exist.

“Amendment 76 is completely unnecessary. The goal of 76 is to set a tone for voter suppression and voter disenfranchisement,” said Julian Camera, the campaign manager for the opposition to the amendment. “The intent behind 76 is to kind of make voters believe that non-voters are fraudulently voting in our elections, and that’s simply not an issue in our state or in our country.”

Beyond that, Camera believes it sends a negative message to immigrants about the state’s attitude toward them and say this could be a slippery slope toward more voting restrictions.

A second group could also be affected by this wording change. The Blue Book analysis states 17 year olds would not be allowed to vote in the primary elections.

“It’s a way to engage our 17 year olds in our democracy, to get their voices into the election system at a younger age, to learn about voting at a time when it’s critical,” Camera said.

He’s worried about the new limits to voting and the message this amendment would send to younger voters.

Stengel disagrees, calling the argument a red herring and insisting the amendment won’t affect the voting age. He says that’s something that can be addressed in the future with a different initiative.

Finally, opponents of Amendment 76 say there is too much outside influence trying to influence this election.

“Colorado Citizens out of Florida, they have a ton of money and they are pushing this amendment or very identical amendments in states across the country,” Camera said.

He believes this is part of a more concerted national effort to change voting systems.

Stengel argues that there is a lot of outside influence with every initiative this year.

“I don’t believe there’s one that doesn’t or hasn’t had an outside influence and outside money coming in. So, to strictly pick on 76 because it’s perceived to be influenced by outsiders, I think it’s factually invalid,” Stengel said.

Of the 11 statewide ballot initiatives voters face this November, Amendment 76 has the shortest write-up in the blue book.

The question asks voters to change a single word in the Colorado Constitution.

On election day, it will be up to voters to decide the fate of that word by picking one of their own: yes or no.