COLORADO SPRINGS – Colorado Parks and Wildlife is now able to use a drone to keep a watchful eye on wildlife.

Donning a set of hi-res goggles while handling the sensitive controls, a CPW officer recently got an overhead look at bighorn sheep during a census effort in western Colorado Springs.

Getting up into the terrain of Queens Canyon and Glen Eyrie safely for an accurate count of the animals can be tricky.  Plus, there’s the challenge of bringing in and coordinating dozens of biologists and volunteers spread out across inaccessible cliffs and valleys, armed only with binoculars, in the hopes of seeing every animal.

The new gear being utilized in our backyard and across the state is thanks to a generous donation from the fundraising of Safari Club International of Colorado Springs. The group is dedicated to protecting the freedom to hunt and the promotion of wildlife conservation.

Along with being a more effective tool for counting Colorado’s herds as part of conservation efforts, the drone will also be used to keep an eye on poachers.

Before you get the idea to take your drone out to a state park or wildlife area, let’s review the regulations.

Overall, the use of drones in state wildlife areas is illegal. An exception is made for model aircraft only in designated areas within state parks. 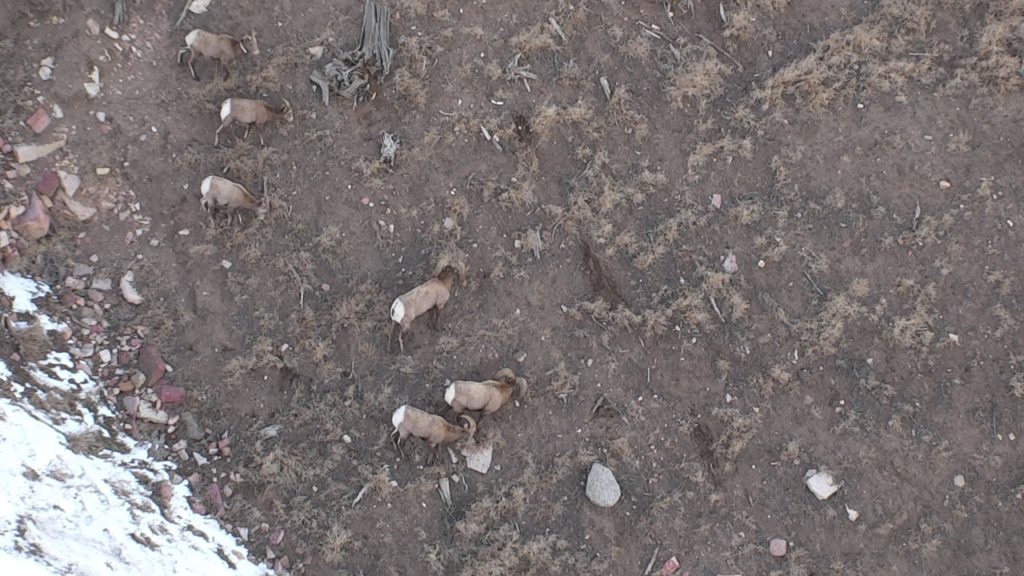 Colorado law prevents hunters from using unmanned aerial vehicles to scout for wildlife as the activity is prohibited under the CPW Commission Regulations. State law only allows the taking of coyotes from an aircraft with a specific permit.

It shall be unlawful to use a drone to look for, scout, or detect wildlife as an aid in the hunting or taking of wildlife.

1. For the purposes of this regulation, drone shall be defined as including, without limitation,
any contrivance invented, used or designed for navigation of, or flight in the air that is
unmanned or guided remotely. A drone may also be referred to as “Unmanned Aerial
Vehicle” (UAV) or “Unmanned Aerial Vehicle System” (UAVS).

The Federal Airborne Hunting Act enacted in 1971 specifically outlaws the shooting or harassing of wildlife from an aircraft without a specific license to do so.  While there is no specific language about drones officials have warned it will be enforced the same.