Human trafficking in Colorado: Groups advocate for new laws in 2018

Human trafficking is a massive worldwide problem, and that’s not excluding the United States, or the state of Colorado.

(COLORADO) – Polaris, the organization that runs the National Human Trafficking Hotline shared a map which showed numerous trafficking reports along the I-25 corridor through Colorado. 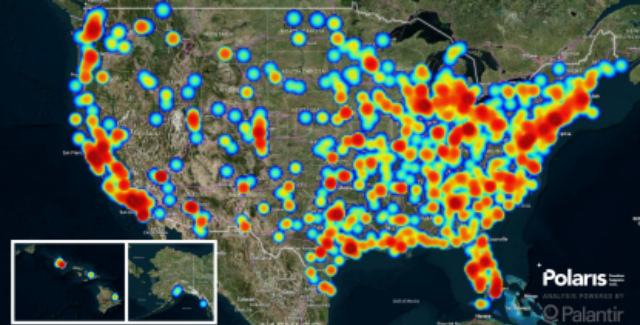 Last year alone, the Human Trafficking Hotline (HTH) received 592 calls from Colorado, which was the 11th highest call volume of any state in the U.S.

To put those numbers into context, there are three things you should remember about those statistics.

Significant efforts are being made to educate people living in Colorado about how to recognize human trafficking.

Truckers Against Trafficking (TAT) is based in Englewood, Colorado, which describes itself as an organization that wants to turn America’s commercial driving force into an investigative army to recognize and report human trafficking.

“[Truckers] are a critical audience that needs to be trained around this issue, so they know how to recognize and report this crime. So we work with every segment of the trucking industry, as well as law enforcement and government agencies in order to really create a mobile army, to hopefully assist victims and arrest traffickers and buyers,” commented Kendis Paris, Founder of Truckers Against Trafficking.

Since the birth of the non-profit, TAT reports more than 500,000 truckers have been educated to look for cases of human trafficking. The group said that’s resulted in nearly 2,000 calls from truckers being made to the National Human Trafficking Hotline. Those calls have identified 545 likely trafficking cases involving more than 1,000 victims, 315 of which were minors.

Here in Colorado, the Department of Revenue hands out a wallet-sized info card from Truckers Against Trafficking with each CDL renewal. If TAT and the Colorado Human Trafficking Council have their way, each new CDL licensee will undergo trafficking recognition training before being licensed.

The group said the training will not cost trucking companies and each training session takes 30 minutes.

“So before they ever hit those roads, they understand this issue, and recognize forced prostitution, in particular, is something that they may come into contact with. So how can they play a role in helping to change a person’s life?” Paris said.

The proposal to train truck drivers is being put before the Colorado state legislature in early 2018. If the proposal is passed, it could mean hundreds of new eyes and ears on the road in the years to come watching out for signs of trafficking.

Truckers Against Trafficking isn’t the only group trying to get lawmakers to pass new bills aimed at combating human trafficking.

In addition to advocating for new laws, the council is also planning to launch an education program for law enforcement officers. Already there are law enforcement volunteers willing to be trained and in turn train their departments.

The group said it believes there should be an understanding of this issue at a young age.  So far, the task force reports that many public schools are open to the idea.