Von Miller says sprained MCL could keep him out vs Texans 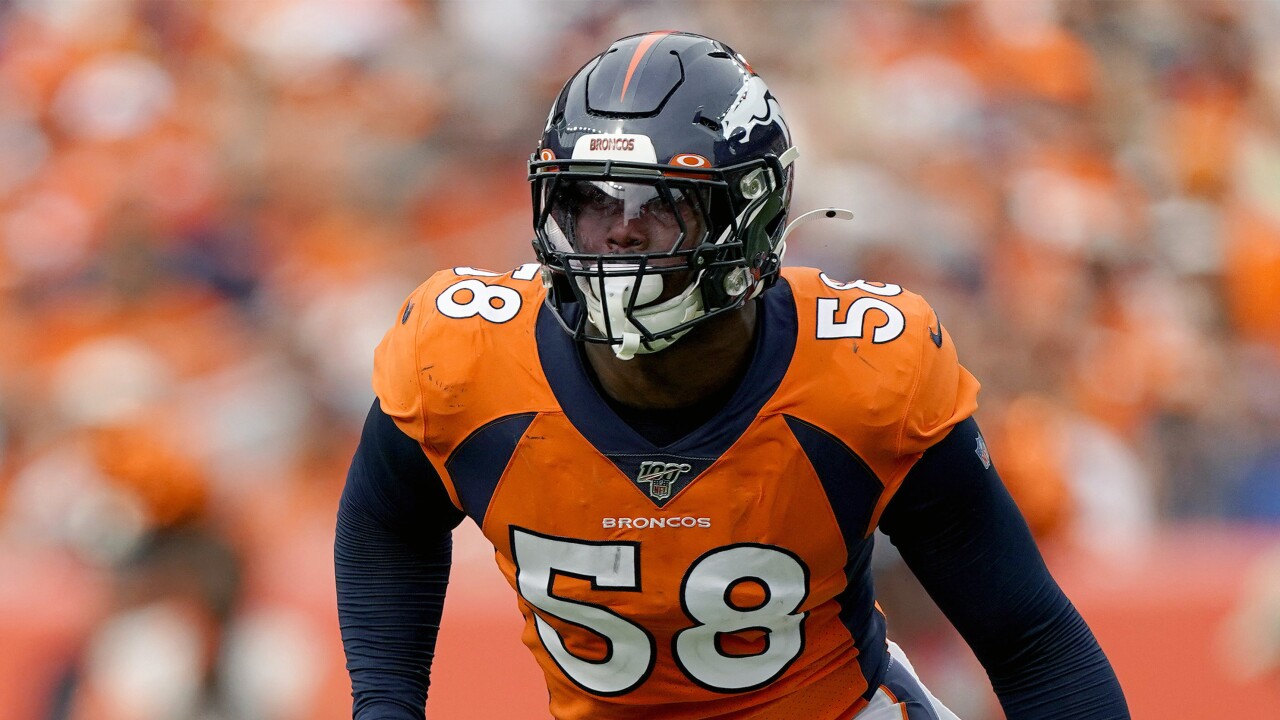 Jack Dempsey/AP
FILE - In this Sunday, Sept. 15, 2019 file photo, Denver Broncos outside linebacker Von Miller (58) lines up against the Chicago Bears during the second half of an NFL football game in Denver. Star linebacker Von Miller says his sprained left MCL that ended his 95-game starting streak might sideline him again Sunday, Dec. 8, 2019 when the Denver Broncos visit the Houston Texans. (AP Photo/Jack Dempsey, File)

"I'm still taking it day by day," Miller said Thursday. "I get better every day. If I can't be out there, if I can't get my exotic movements back, then in my opinion I don't feel like I should be out there."

Miller got injured at Buffalo two weeks ago and worked out diligently before the Broncos' game against the Los Angeles Chargers on Sunday. But he couldn't perform his side-to-side movements that are integral to his game without pain, so he was deactivated.

That ended Miller's 95-game starting streak that began in 2014 after he missed the Super Bowl following the 2013 season with a torn right ACL, which he sustained five weeks earlier in a win at Houston.

"It was hard. It was extremely hard. I cried real tears, a 30-year-old man," Miller said in his first public comments since his streak ended with the Broncos' 23-20 win over the Chargers.

"As a pro football player, my identity is sewn into playing football," Miller said. "It's sewn into getting sacks, being out there with my teammates. Just to have that taken away for just a little bit, you know I have other stuff that I can do, everybody knows that I can farm chickens, I'm quite the comedian. But who I am, I play football. And that's what I do well right now and to have that taken away for three hours, I really felt it."

Miller said if he played inside linebacker or defensive tackle where he only needed his straight-line speed, he could have played. But his position demands the side-to-side movements that were impossible with his injured knee.

Last week, Miller only practiced on a limited basis Friday. This week he's participated in both practices so far.

"I feel better. It's not something that I just get over like that. It takes a little bit of healing time but I do feel better," Miller said. "I feel better than what I did yesterday. And that's all I can really hope for."

Miller said he didn't think the turf at NRG Stadium would play a role in his status this weekend.

"No, I don't think that matters. I think I just have to worry about getting myself back on the football field and I'm doing everything I possibly can do," Miller said.

Miller made one thing clear: he's not going to shut it down and go on IR.