A text message sent by a Pueblo marijuana business calls for customers to vote out an incumbent county commissioner. The commissioner thinks the business broke state election law. 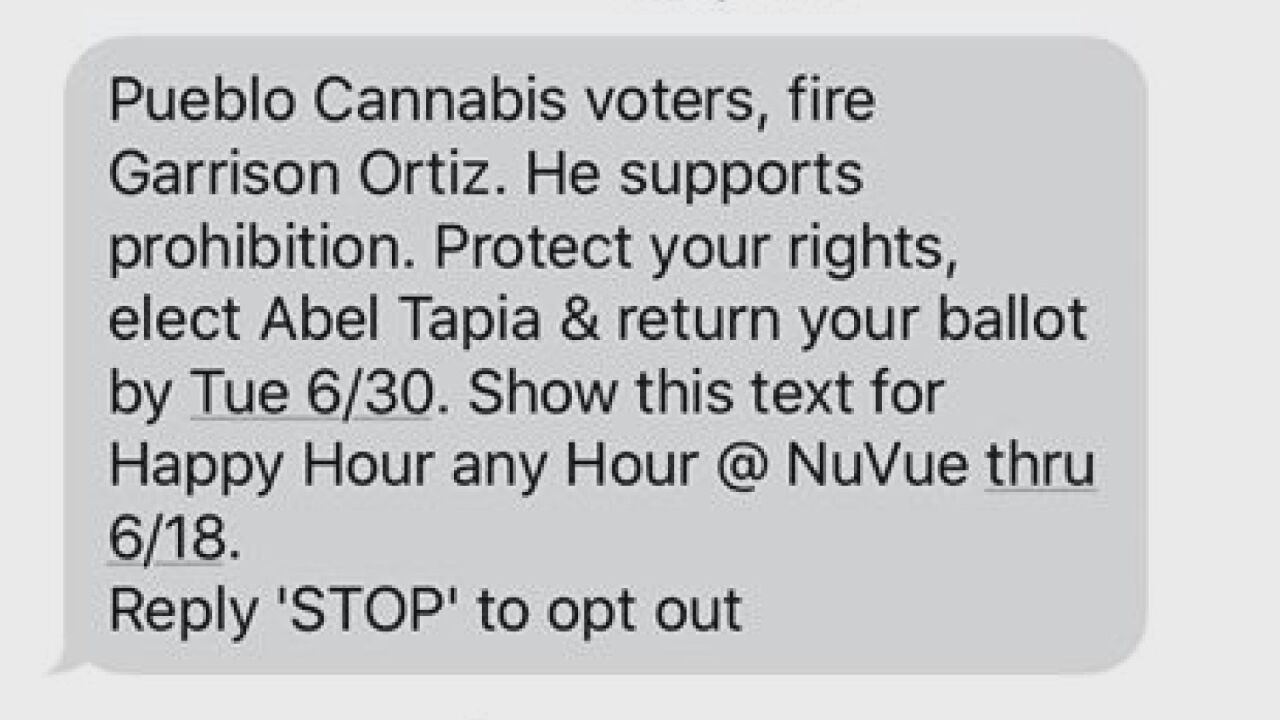 PUEBLO, Colorado — A local marijuana business has jumped in the middle of the Democratic primary race to be nominated for Pueblo's County Commissioner District 2. NuVue Pharma sent a text message to its customers last week urging them to vote in favor of challenger Abel Tapia over incumbent Garrison Ortiz. The message also included an offer for a discount on marijuana.

Commissioner Ortiz believes the text broke campaign finance laws and could be a crime.

"It's obviously a campaign finance violation at the least but you can see that it's being looked into by law enforcement as well," he said.

The Pueblo Chieftain reported last Thursday that 10th Judicial District Attorney Jeff Chostner was, "working with the Colorado Attorney General's office to see if the text constitutes a crime."

A spokesperson for Attorney General Phil Weiser declined to comment and our calls and emails to Mr. Chostner on Friday went unanswered.

Colorado election law C.R.S. § 1-13-720(b) makes it a misdemeanor crime for anyone, "to advance or pay, or cause to be paid, any money or other valuable thing to or for the use of any other person with the intent that the same, or any part thereof, shall be used in bribery at any election."

Ortiz believes the law is in his favor.

"If you offer anything of value in exchange for a vote, it's pretty illegal and crossing the line a bit."

Dr. Malik Hasan owns NuVue and explained that the text message was supposed to have been split into two separate messages, one political and the other offering the happy hour discount. He said the happy hour language has been used in hundreds of previous promotions and that its inclusion was a mistake.

"Everybody got the same discount," he said. "So, it wasn't that somebody asked and said okay are you going to vote against Commissioner Ortiz so that we'll give you a discount. No, nobody asked that question."

Dr. Hasan explained that he wanted to tell his customers to vote against Ortiz because of recent actions taken by the Board of County Commissioners which redirected marijuana tax revenue away from the Pueblo Hispanic Education Foundation Scholarship program and the Institute of Cannabis Research at CSU Pueblo.

"For me, it was an abomination that somebody would take the money from the poor students scholarship and contribute it towards the jail," Hasan said.

Ortiz said the prohibition claim of the text is false.

"There's never been a vote on prohibition against the industry," said. "That vote has never taken place and I've never voted for prohibition and it's never a vote the Pueblo County Board of Commissioners has ever taken."

Dr. Hasan also criticized the district attorney for publicly speculating about criminal charges comparing his statement in the newspaper to intimidation. He noted that Mr. Chostner endorsed Ortiz and donated hundreds of dollars towards his re-election campaign.

"Look, I'm an immigrant. These things are done in developing countries where those who are in power want people not to vote their conscience and their choice but to vote the way they tell them to vote."

As of Friday afternoon, Ortiz's campaign had not yet filed a campaign finance complaint with Colorado Secretary of State's Office. However, Ortiz said he plans to do so soon.