No. 18 Colorado holds off Southern California 70-66 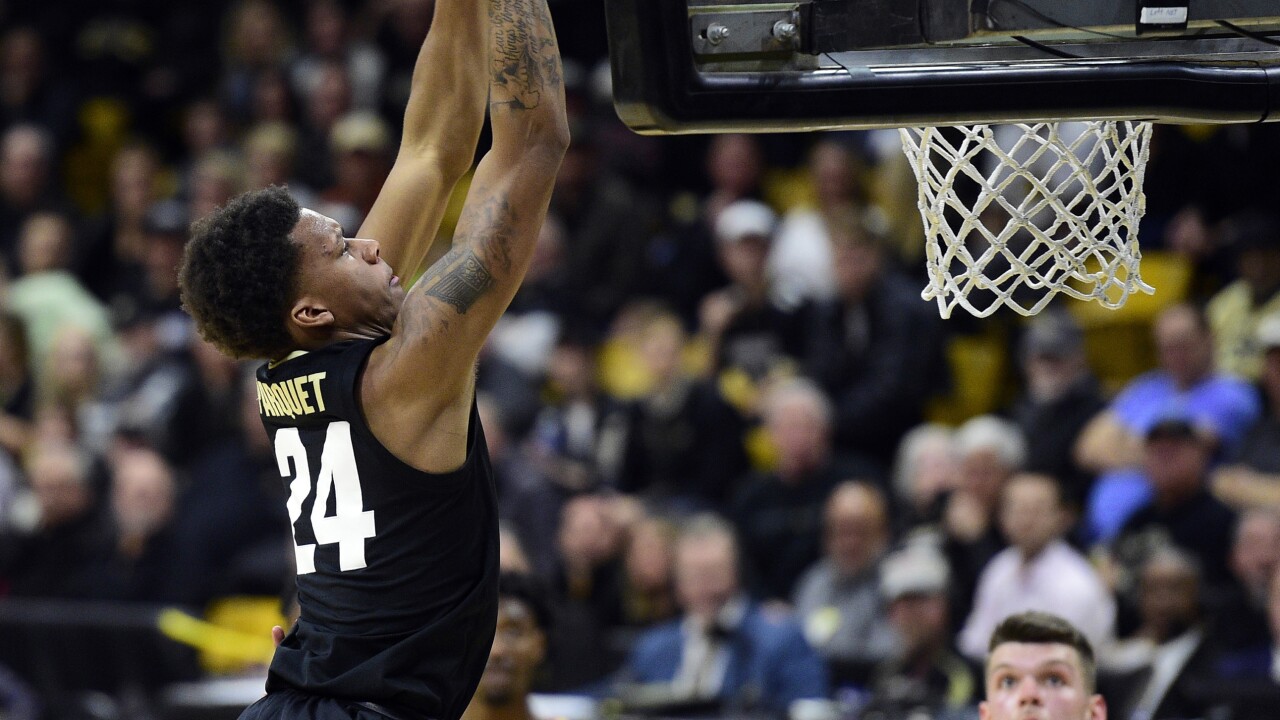 BOULDER, Colo. (AP) - The Colorado Buffaloes have never won a Pac-12 Conference title, so winning pretty isn't a priority. Piling up the victories is good enough.

"In February you take them where you get them," coach Tad Boyle said.

The Buffaloes got a big one Thursday night.

McKinley Wright IV had 15 points, including a floater in the lane in the final minutes, to help No. 18 Colorado hold off Southern California 70-66.

Wright added six rebounds and seven assists, and Tyler Bey had 14 points and 11 rebounds for Colorado (21-6, 10-4). The Buffaloes lead the conference by a game after Oregon fell 77-72 at Arizona State on Thursday night.

"We just got to win now, we gotta move on to the next game," Wright said. "Everybody wants us to lose, nobody wants us to be first place in this Pac-12 so all we can worry about is ourselves and our teammates and our fans that are rooting for us and go get them."

Colorado took the 2012 conference tournament in Boyle's second season but has never won a regular-season title. The Buffaloes have four games remaining, starting with the final home game against UCLA on Saturday.

Colorado was up 41-40 after Okongwu's dunk early in the second half but quickly opened a double-digit lead. Shane Gatling and D'Shawn Schwartz hit 3-pointers and Lucas Siewert had two more from long range during a 15-4 run to stretch the lead to 56-44 midway through the second half.

USC came back, making it 67-66 on Okongwu's dunk with 1:35 left. Wright's floater gave Colorado a three-point lead and the Trojans had one more chance to tie it but Daniel Utomi was called for traveling with eight seconds left. Wright hit a free throw to seal it for the Buffaloes.

The Buffaloes had just six points more than 10 minutes into the game and trailed 20-6 but outscored USC by 14 to tie it and trailed 29-26 at halftime.

"We just let off the gas pedal, they came out hard and we weren't tough enough," Okongwu said. "We just weren't being smart after being so close."

Southern California: Rakocevic moved past Taj Gibson into second place all-time in rebounds in program history. He now has 902 and trails only Ron Riley, who has 1,067. ... The Trojans are 5-5 on the road after finishing 2-9 in 2018-19.

Colorado: Bey notched his 11th double-double of the season and 30th of his career. ... Schwartz played without a facemask despite suffering a hairline fracture on the bridge of his nose at Oregon State on Saturday. .... The Buffaloes shot 34.5% in the first half and 60.7% in the second.

Southern California coach Andy Enfield said point guard Elijah Weaver was out of position on the play when Utomi was called for traveling, costing the Trojans a chance at tying it up.

Southern California: At Utah on Saturday.