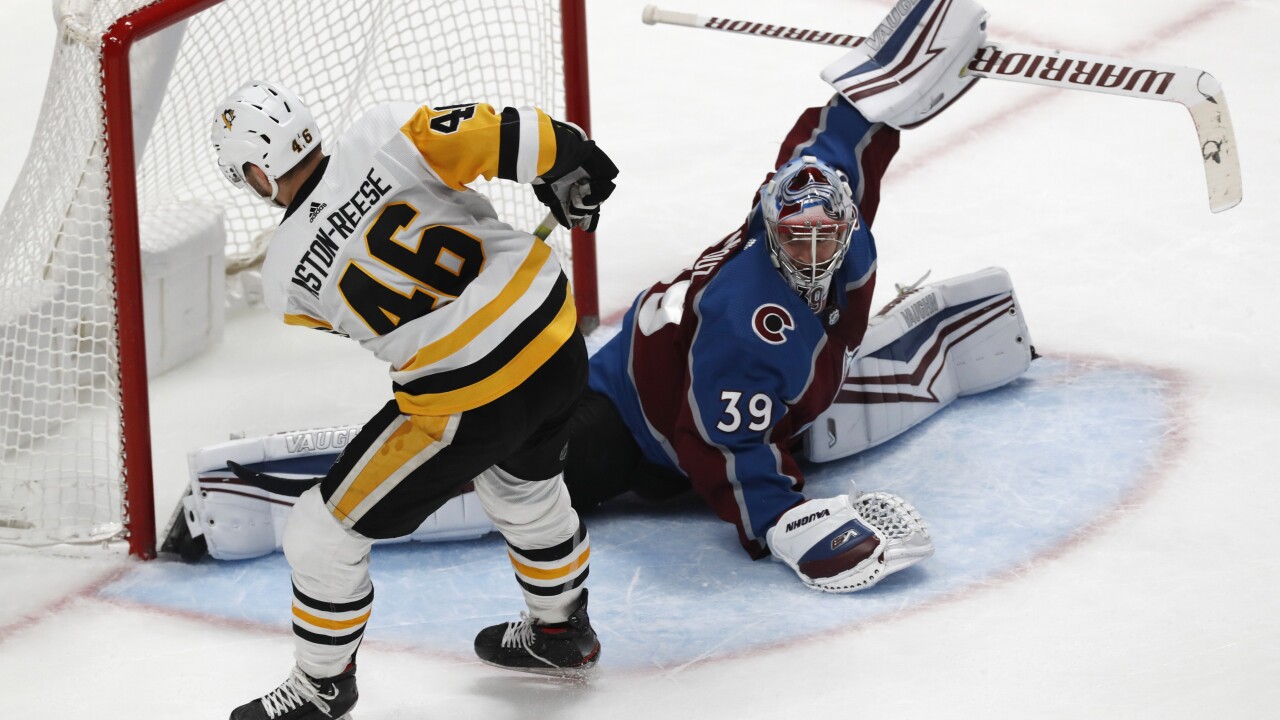 DENVER (AP) - Jared McCann scored at 3:19 of overtime and the Pittsburgh Penguins beat the Colorado Avalanche 4-3 on Friday night for their fourth straight road win.

Evgeni Malkin and Bryan Rust each had a goal and an assist for Pittsburgh, which recovered from blowing a late lead to pick up the two points. Matt Murray made 28 saves, Teddy Blueger also scored and Dominik Kahun had three assists.

The Avalanche tied the game with 30.4 seconds left in regulation when Matt Calvert tipped in a shot by Cale Makar. Both teams had chances in overtime before McCann beat Pavel Francouz from the slot for his 12th goal of the season.

Gabriel Landeskog had a goal and an assist, and Nathan MacKinnon also scored for Colorado. The Avalanche are 3-6-2 in their last 11 games.

Malkin, who got his 640th career assist earlier in the game, gave the Penguins a 3-2 lead when he beat Francouz inside the left post at 15:43 of the third period for his 13th goal of the season.

MacKinnon scored a power-play goal in the first period, his 27th of the season. He has six goals and seven assists in the last eight games.

Malkin appeared to tie it later in the first but the goal was waived off because Rust was draped on Francouz with the puck sitting at the front of the crease.

The Penguins did pull even in the second period when Blueger scored right after a Colorado penalty kill, but Landeskog's flip shot from the neutral zone took an odd bounce past Murray late in the period.

Rust got Pittsburgh even again with his 18th goal 1:14 into the third.

NOTES: Francouz finished with 26 saves. ... Penguins C Sidney Crosby missed his 27th game with a core muscle injury but is getting closer to a return. ... Avalanche RW Joonas Donskoi (concussion protocol) was out. He got injured at the New York Rangers on Tuesday. ... Samuel Girard had two assists in his 200th career game.

Penguins: At the Arizona Coyotes on Sunday.