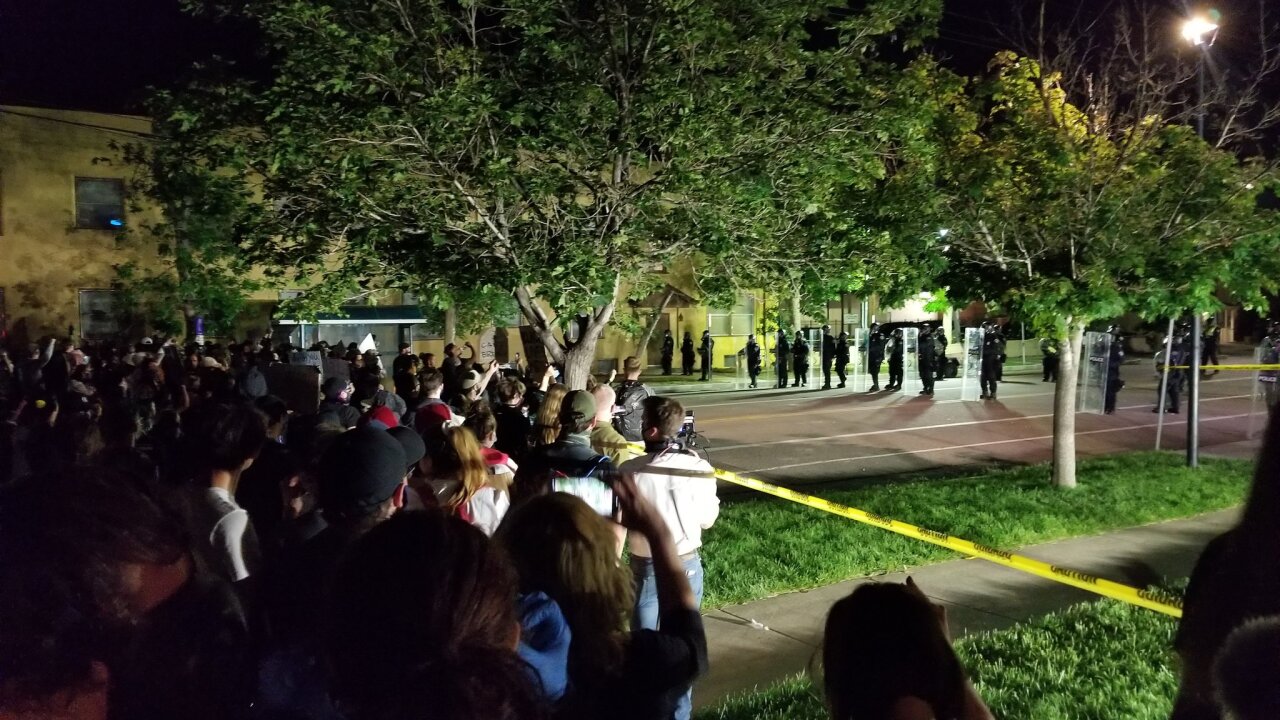 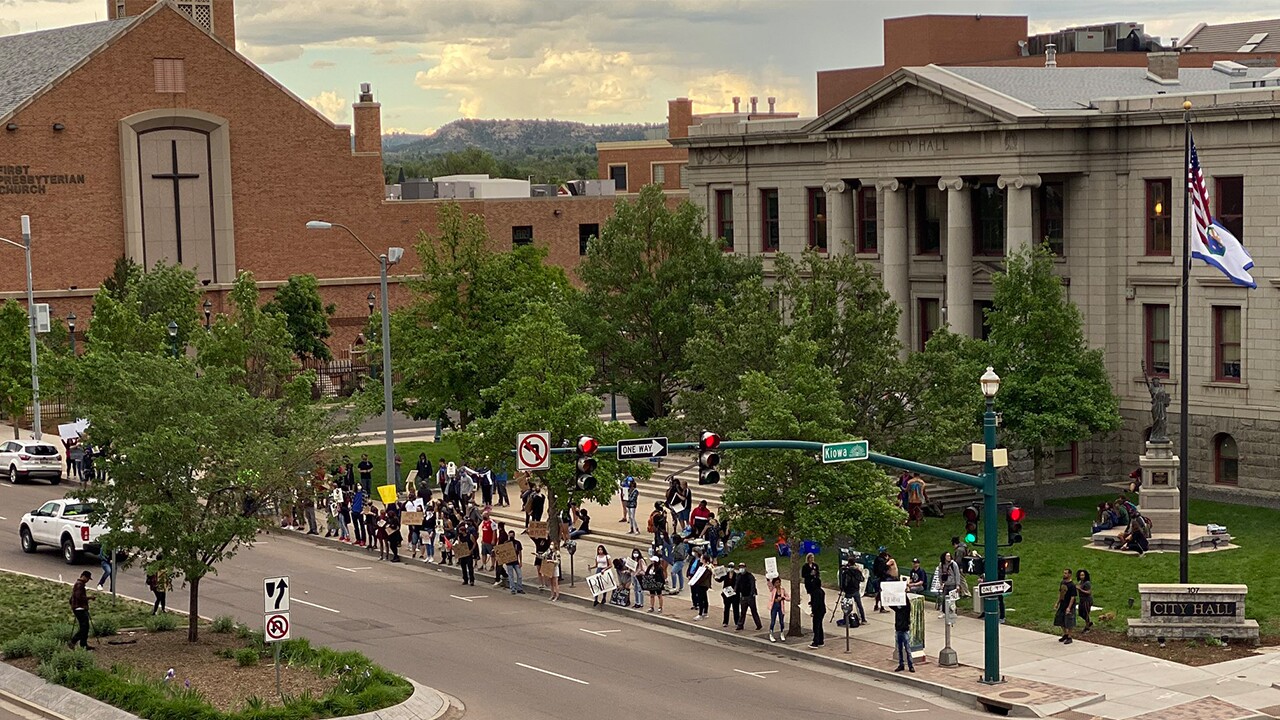 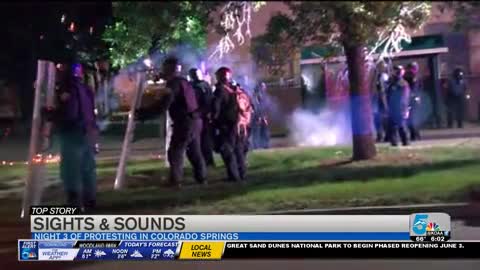 The death of George Floyd, an African American man who died on May 25 in Minneapolis while in police custody, has sparked unrest nationwide about police brutality. Cities across the country and here in Colorado are anticipating protesters again Tuesday.

In Colorado, protests began on Thursday in Denver and began on Saturday in Colorado Springs. People are planning to protest in downtown Colorado Springs starting at noon. Traffic around near this area is expected to be congested near city hall around 12 p.m. Use an alternate route if possible.

Monday's protest in Colorado Springs ended just before midnight after police declared it an unlawful assembly and used gas to disperse the crowds. For more information on Monday's protest, click here.

News5 will continue to follow the protest locally and provide the latest information here:

Sometime around 10:40 p.m. a Colorado Springs Police Lieutenant came over a speaker and announced the protest was declared an unlawful assembly and protesters were commanded to immediately disperse.

A firework went off and much of the crowd scattered. Police vehicles have shown up to the scene with sirens going and officers are moving through the area as the crowd disperses. What appears to be either smoke or tear gas can be seen in the area.

Around 10 p.m. Tuesday night the protest moved back to the Police Operations Center in Colorado Springs.

A few officers are out in what appears to be riot gear. Protesters are chanting many of the same chants we have heard throughout the day. They are also chanting the names of people who have been killed by police.

As of 10:30 the protest remained peaceful.

he protest moved back to down to City Hall after leaving the Police Operations Center.

At one point, chants turned to "no Trump, no kkk, no racist USA." As this chant went on, a group of protesters gathered in the street and began to dance along with the rhythm of the chant.

After spending about an hour sitting outside of the Police Operations Center, protesters began to march again. They headed back through downtown repeating many of the same chants as earlier but also saying, "what's his name, George Floyd."

So far the protest has been completely peaceful Wednesday night.

What you see in the video is the arrest of a man standing in the street with his arms up. The individual who shot the video said she saw the violent take down happen after midnight, early Monday morning.

In the video you can see multiple officers take the man to the ground, cuff him, and then hit him multiple times while he is on the ground.

News 5 reached out to the Colorado Springs Police Department Tuesday night but they didn't provide a comment.

CSPD Chief Vince Niski did however release a statement about an unspecified online video. The full statement can be found here.

Shortly after 6 p.m., the protest moved out of Acacia Park. They began marching through downtown in the direction of the Police Operations Center.

As they marched, protesters chanted "no justice, no peace," "black lives matter," "hands up, don't shoot," and "peaceful protest."

Gov. Polis held a press conference Tuesday during which he addressed the ongoing protests, as well as the latest with COVID-19 in Colorado.

Gov. Polis began the press conference by speaking about Georgre Floyd. He called Floyd's death a murder. Then speaking to protesters, the Gov. said "I see you. I hear you. I grieve with you." He said the property damage during the protests is "unfortunate" and a distraction from the actual message of the protests.

Polis then said "It's divisive and sad to hear some call for a more violent crackdown. This is not China. This is not Tienanmen Square. And that's not leadership."

He then addressed the protest and COVDI-19 by saying protesters should go and get tested seven days after being in a crowd if they're asymptomatic. If you have symptoms, you should get tested ASAP.

Later, during the question portion of the press conference, Polis was asked about why he hasn't made any public appearances since protests broke out. He responded by saying he has been in listening mode. "Part of leadership is knowing when and how to listen," Polis said. He then went on to say, "the President's threat to deploy federal troops is counterproductive."

Watch the press conference below:

Day 4 of #GeorgeFloyd protests are underway in downtown Colorado Springs. Some passing vehicles honk in support as protestors shout, “I can’t breathe!” This is what Floyd said before his death. We are told this protest is scheduled to last until about 6pm this evening. @KOAA pic.twitter.com/gzukUv4q1f

Colorado Springs School District 11's superintendent released a statement Tuesday regarding the recent protests. Dr. Michael J. Thomas illustrated growing up as a black man in Woodbury, Minnesota, and being pulled over by an officer while he was with his two friends. He wrote that the police asked for their IDs and ran checks before they "were told to 'GET OUT OF WOODBURY!'"

"Scared, angry, confused, yet thankful, 30 years later I am alive to tell my story. I tell my story because so many other black men, like George Floyd, will never have that opportunity," he wrote. "Can my allies understand the mental anguish about being black in America, or is my life also just a romance to you? My heart goes out to the many black people who lost their lives senselessly."

He stated as superintendent he wants to ensure "high quality education experiences for our students, but also support their emotional wellbeing. We are proud of the rich diversity within our learning community and I want to assure everyone that ALL are welcomed in District 11."

The graffiti removal crew hard at work this morning at City Hall. Profanity laced graffiti has been popping up across downtown in the overnight hours for several days. The crew starts early in the morning to remove the tagging. @KOAA pic.twitter.com/3DgNghyrKc

Demonstrators will be out again around city hall beginning at noon after a late night for some protestors.

Protests beginning at noon in downtown Colorado Springs
Copyright 2020 Scripps Media, Inc. All rights reserved. This material may not be published, broadcast, rewritten, or redistributed.