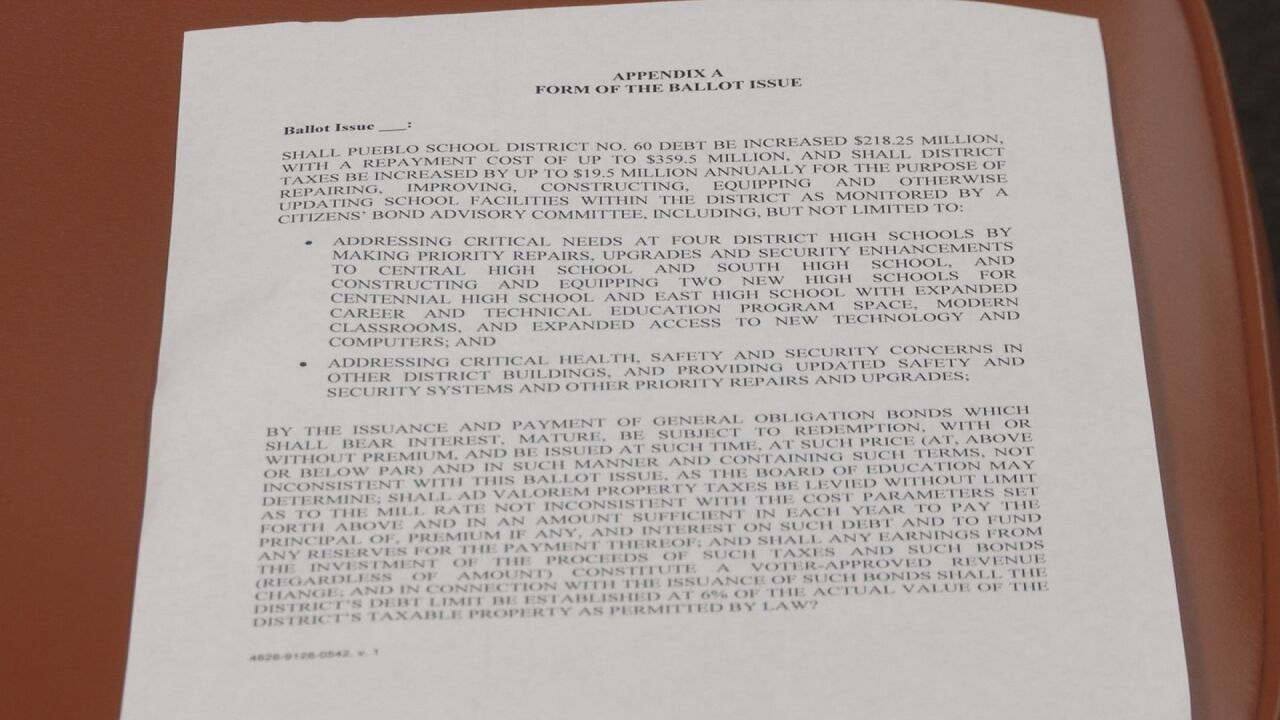 Copyright 2019 Scripps Media, Inc. All rights reserved. This material may not be published, broadcast, rewritten, or redistributed.
Colette Bordelon
Copy of the official ballot language for School District 60 bond measure.

PUEBLO — After a District 60 School Board meeting on Tuesday, the official ballot language for their bond measure question was unanimously approved and will be on the November ballot in Pueblo.

The question of how to handle aging school facilities has been discussed for many years with different solutions being proposed, according to those with the school board. The school board decided to go with a bond measure for $218 million. When calculating interest on the bond, the amount comes to $237 million.

The President of the District 60 School Board, Barb Clementi, said this decision is huge for the future of Pueblo. "I don't believe there's any greater investment that we can make than in our future and our kids," said Clementi during the meeting.

If the bond measure were to pass in the November election, it would be used to build completely new schools for Centennial High School and East High School, as well as providing upgrades for Central High School and South High School. The new high schools would be placed on the same campuses as their current locations, said those behind the bond. The money would also pay for upgrades to a handful of other schools within the district, according to the ballot language.

News 5 spoke with a woman who was born and raised in Pueblo, and said some of the school buildings could use the help. "I think there's a lot of tax money that goes to different things that don't really need to be there. I think that schools definitely need the tax money... I definitely would go for it, yeah, they'd have my vote," said Larissa Baca, who attended South High School.

School Board members said they expect to pay off the bond in 20 years. For a residential home, it would cost a little more than $6 a month for every $100,000 of assessed property value. For a business, it would cost around $26 per month for every $100,000 of assessed real property value. The rates are according to those behind the bond, who also said the average home in Pueblo costs around $150,000.

Here is the exact question as it will appear on the ballot:

SHALL PUEBLO SCHOOL DISTRICT NO. 60 DEBT BE INCREASED $218.25 MILLION, WITH A REPAYMENT COST OF UP TO $359.5 MILLION, AND SHALL DISTRICT TAXES BE INCREASED BY UP TO $19.5 MILLION ANNUALLY FOR THE PURPOSE OF REPAIRING, IMPROVING, CONSTRUCTING, EQUIPPING AND OTHERWISE UPDATING SCHOOL FACILITIES WITHIN THE DISTRICT AS MONITORED BY A CITIZENS’ BOND ADVISORY COMMITTEE, INCLUDING, BUT NOT LIMITED TO:

BY THE ISSUANCE AND PAYMENT OF GENERAL OBLIGATION BONDS WHICH SHALL BEAR INTEREST, MATURE, BE SUBJECT TO REDEMPTION, WITH OR WITHOUT PREMIUM, AND BE ISSUED AT SUCH TIME, AT SUCH PRICE (AT, ABOVE OR BELOW PAR) AND IN SUCH MANNER AND CONTAINING SUCH TERMS, NOT INCONSISTENT WITH THIS BALLOT ISSUE, AS THE BOARD OF EDUCATION MAY DETERMINE; SHALL AD VALOREM PROPERTY TAXES BE LEVIED WITHOUT LIMIT AS TO THE MILL RATE NOT INCONSISTENT WITH THE COST PARAMETERS SET FORTH ABOVE AND IN AN AMOUNT SUFFICIENT IN EACH YEAR TO PAY THE PRINCIPAL OF, PREMIUM IF ANY, AND INTEREST ON SUCH DEBT AND TO FUND ANY RESERVES FOR THE PAYMENT THEREOF; AND SHALL ANY EARNINGS FROM THE INVESTMENT OF THE PROCEEDS OF SUCH TAXES AND SUCH BONDS (REGARDLESS OF AMOUNT) CONSTITUTE A VOTERAPPROVED REVENUE CHANGE; AND IN CONNECTION WITH THE ISSUANCE OF SUCH BONDS SHALL THE DISTRICT’S DEBT LIMIT BE ESTABLISHED AT 6% OF THE ACTUAL VALUE OF THE DISTRICT’S TAXABLE PROPERTY AS PERMITTED BY LAW?