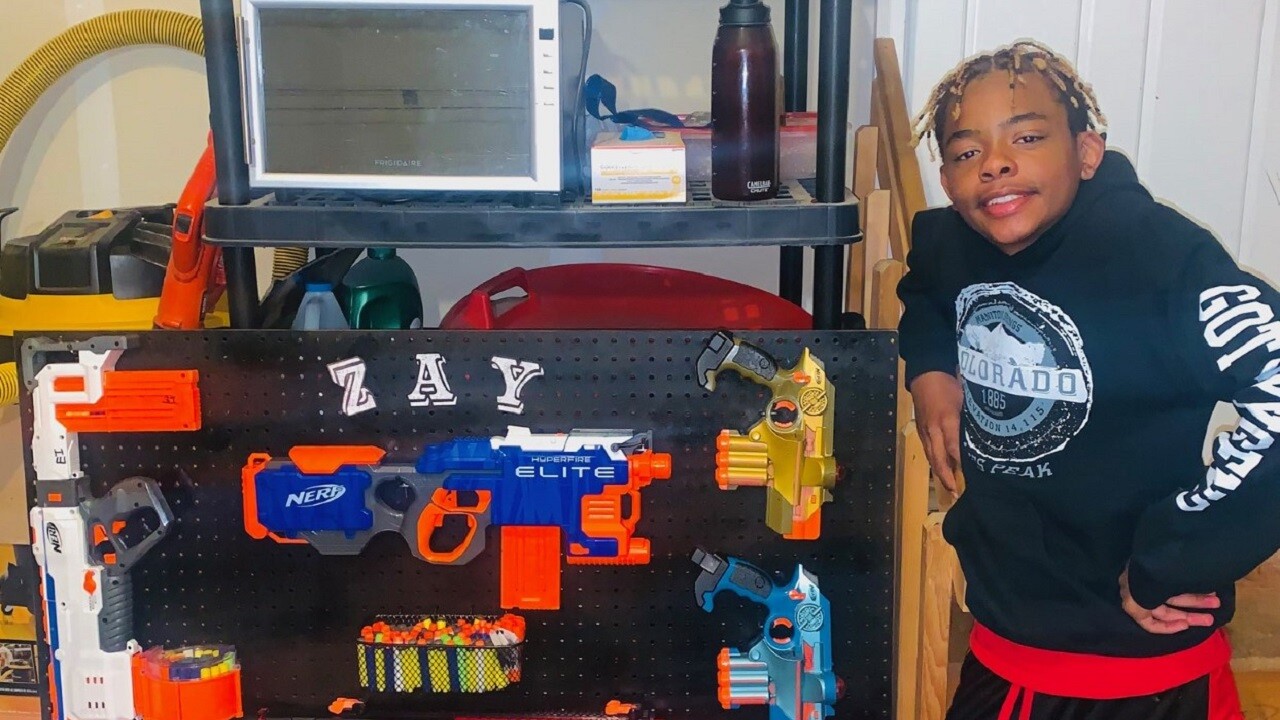 KOAA
Isaiah Elliott, 12, with his collection of toy Nerf guns. The 7th-grader was suspended from school last week for showing off an airsoft gun during a virtual lesson. 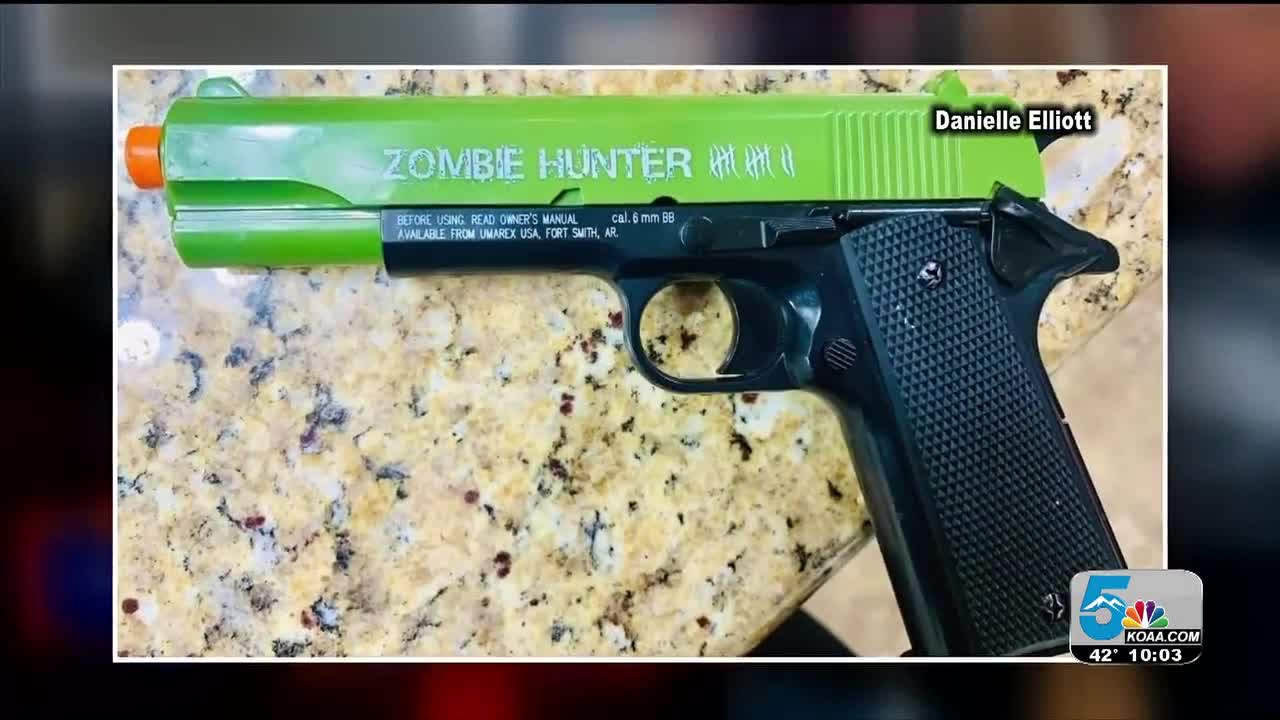 WIDEFIELD, CO — A Southern Colorado school district has faced backlash after a student was suspended following a virtual class, where he was seen with a toy gun.

On Thursday, the El Paso County Sheriff's Office released body-worn camera footage from the school resource officer who responded. In the video, it is noted that the teacher who made the report was unsure whether it was a toy gun or a real weapon.

Isaiah Elliott's mother said they have been asking to see this video for weeks, and are upset it was released without their knowledge.

He described playing with the toy gun and his friend during a virtual class through Widefield D3's Grand Mountain School. Isaiah said he put the toy away when the teacher asked him to, and a little later, he got a phone call from his mother. "She was all upset and scared," said Isaiah.

Isaiah's mother, Danielle, said she called her son when she found out a school resource officer was heading to their house. "There's different ways of handling things instead of getting law enforcement involved, especially in today's society... To call the police, especially on an African American child, it could be potentially fatal. And that's what was one of my biggest concerns," said Danielle.

Isaiah said everything that transpired made him feel as though he let his family members down.

"They [school resource officers] were nice, but at the same time, it was still very scary because I've never really had an interaction with the police before," said Isaiah.

Isaiah was not formally charged, but was suspended for five days.

Danielle has dozens of questions about how this incident was handled. "I think that's the school overstepping their jurisdiction into the privacy of our own homes, and I think that's definitely something that needs to be changed as well," said Danielle.

Danielle Elliott said since the incident began gaining national attention, they have had many organizations reach out to them about pushing for policy changes, creating a bill, or filing a lawsuit. Elliott said they are considering a lawsuit, but she said it's not about the money. She said she wants to create long-lasting change. "We would like to advocate for children across the world, so that this doesn't have to happen again... We could hopefully get to the root cause of these issues, as far as criminalization of children, and discrimination against children with disabilities beyond their control," said Elliott.

One of her biggest questions surrounded the legality of recording remote learning sessions. She wants clear cut guidelines when it comes to virtual schooling. "I knew going into the school year with the virtual learning environment, that my son would be on camera, and that the teacher could see him. However, at no point in time did I ever consent to him being recorded," said Danielle.

News5 reached out to Widefield School District 3, and a spokesperson provided us this response on behalf of Grand Mountain School:

"The platforms we use for distance learning have the feature to record classes for educational purposes. For example, if a student missed a lesson, a recording of that lesson could be shared with the student at a later time. That is the idea of the recording feature in Schoology. Most school districts who are doing distance learning are using platforms that have the ability to record classes.

During our first week of school, as teachers were becoming more familiar with the platforms, some classes were recorded primarily to take attendance at a school. It was not our intention to record classes, therefore parents were not directly notified. We are not recording classes at this time, and if that practice changes parents and students will be notified.

Unfortunately, we did have to remove the school's Facebook page due to non-stop threats, harassment, and bullying."

Danielle said the superintendent of the school district called her on Thursday, and asked about setting up a meeting to try and move forward with the situation.

Isaiah was officially removed from Widefield School District 3 on Tuesday. His family hopes to enroll him in a charter school.

News5 also reached out to other school district's in both Colorado Springs and Pueblo, to learn more about their policies on recording remote learning. Here are four district's responses:

Directory information means information contained in a student’s education record that would not generally be considered harmful or an invasion of privacy if disclosed. Directory information includes the student's name, date and place of birth, major field of study, participation in officially recognized activities and sports, weight and height of members of athletic teams, dates of attendance, degrees and awards received, the most recent previous education agency or institution attended by the student, photographs, video and audio recordings made during school hours, school events, and other similar information."

"Academy District 20 doesn’t have policy that prohibits a teacher from recording. It is therefore permissible for the teacher to record a class while delivering online instruction.
Student privacy is protected by the Family Education Rights and Privacy Act (“FERPA”), §20 U.S.C. 1232g. The district’s use of an online platform complies with FERPA and the general school official exception.

Information shared during online learning is for educational purposes only and is not disclosed to others outside the class. Additionally, due to our transition from in-person to online lessons, it is permissible to record the lesson.

Video records are not directly related to a student and are not maintained by the district on behalf of any specific student. Rather, the records are intended to increase student access and participation when a student is unable to attend the online class in real-time."

"Teachers and/or students are not allowed to record google meetings."

"Our District uses Schoology as the Learning Platform, the video conference app only allows the teacher to see all the students in the class. Students are only able to see the teacher. It has eliminated a lot of issues we had from the spring semester when many teachers were using zoom.

A lot of teachers will record their class sessions and post them back to Schoology in the event that students who were absent can view at a later date. Our District does not mandate it as required, but some teachers are using it. The viewing link is only available to those in the class. It is something we are frequently reviewing with Principals and Administrators."