COLORADO SPRINGS – People who call the Regency Tower Apartments home are meeting today to learn more about when everyone will be able to return home and additional information about the May 24th fire on the 10th floor.

The restoration company is telling residents they will temporarily reopen the building from 8:00 a.m. to 5:00 p.m. from next Monday through Friday. After Friday, the building will be evacuated again for asbestos removal. The company is closing a stairwell which serves as an emergency exit, which means the building can’t be occupied for up to 2 months.

Another shock to residents came from building manager Cherie Pearson who encouraged everyone to go ahead and pay their rent for the month of June, even though they can’t stay in the building. Pearson explained that money will be prorated to their July rent statements.

“So, what I’m telling tenants is when get your statement, pay the June statement amount and then on the July first statement, those amounts will be prorated on their July statements,” Pearson said.

She also said there won’t be a penalty if people choose to break their leases early in search for alternative living arrangements.

Those resident who live on floors 1 through 9 will be allowed into their apartments between the hours of 8:00 a.m. and 5:00 p.m. from Monday through Friday of next week to recover their belongings before the work begins to remove the asbestos. Pearson explained that Friday is a firm deadline in order for the contractor to complete their work on time.

Tenants on the upper floors 10 and 11 will have one-on-one meetings with the restoration company on how to recover their belongings. Those floors suffered the worst of the fire damage and some items may have to be claimed as losses for insurance.

State Farm agent Erica Szymankowski let everyone know there is a policy that covers the entire building owned by Jaw Properties. The company will work with insurance carriers for individual renters to manage claims related to the fire.

According to the agent, most renter’s insurance policies may cover the cost of temporary living expenses, but some may have a cap.

Walter Shambaugh has lived at the Regency Tower since 2004. He paid a $500 deductible on his renters policy but said he’s otherwise been well taken care of by his carrier.

“We had insurance on our home. So, when we got here I made sure to have rental insurance,” Shambaugh said.

A number of tenants did not have renters insurance. Diane Ricucci said she about three or four others have been staying in the Red Cross Shelter since the fire.

“Obviously, it’s traumatic, but the thing that’s made it livable and wonderful has been the Red Cross,” Ricucci said.

She said the groups volunteers have been a calming presence in an otherwise chaotic situation.

Silver Key Senior Services has been raising money to help displaced residents like Diane to afford temporary housing during the restoration. She said is very appreciative of both local charities and understands the need to close the building.

“If they’re delaying it two months, it’s a serious thing,” Ricucci said. “Asbestos? You don’t want to fool around with that.”

Visit www.silverkey.org or contact them at 719-884-2300 to make a donation in support of the fire relief efforts. 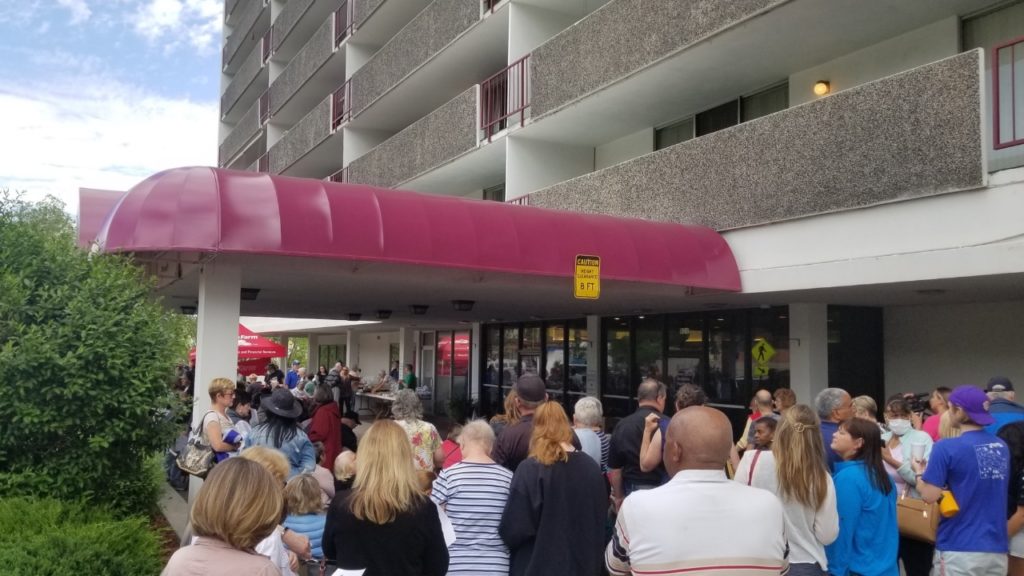 An 89-year-old woman died days after she was rescued from the building while suffering from smoke inhalation. More than 100 people were forced out of their homes as a result of the fire.

As the fire raged on the 10th floor, fire crews used several ladder trucks to reach people told to go to their balconies for evacuation. It was a dangerous scene for all as the residents are elderly, many have health issues.

Fire crews searching the building during the fire had to look closely for anyone trying to seek safety in units, while worrying about the potential for oxygen tanks exploding in apartments due to the extreme heat.

As of this morning, the Colorado Springs Fire Department has not announced the cause of the fire.