School district bond issue may include money for aquatics center

PUEBLO – Voters in Pueblo will have to decide on a bond issue this fall to borrow around $300 million to build two new high schools and to repair and consolidate elementary and middle schools. But the district is also thinking of spending some of that money on the City’s downtown aquatics center.

District 60 has been engaged in a facilities master plan process since January. Through a series of public forums, administrators have narrowed down the potential bond issue proposals to a 2-high school option, and a 4-high school option. Neither plan includes swimming pools for the new high schools. 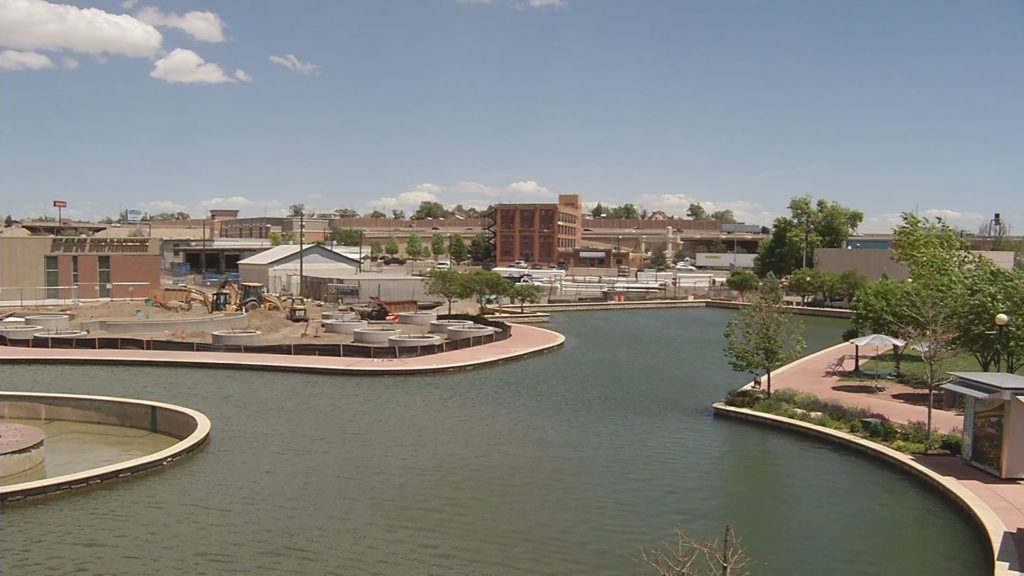 A view of the Pueblo Historic Arkansas Riverwalk looking east toward potential locations for an aquatics center.All four of the district’s traditional high schools currently have pools. However, the pool at Central is in need of repair. Sprouse said the idea of a shared pool built in partnership with the City came through the public forums.

“If we were to become a City with an aquatic center, that could benefit our high schools much like Dutch Clark does and much like Runyon Field does,” Sprouse said. “Why not make that happen?”

He said the idea was to build an indoor 50-meter competition pool, a dive pool, and a splash park at a site along the Riverwalk through a public-private partnership. The aquatics center and an extension of the HARP channel were both listed as Phase 3 projects in that application meaning they were not intended to be built until 2030.

Slyhoff said C-DOT has agreed to give Pueblo some money to build a new swimming pool because its plans to expand I-25 near Mineral Palace Park would encroach on the existing pool. However, financing for the highway construction project has not been identified.

A private meeting was held among a small group of city and school officials earlier this month to discuss the feasibility of such a partnership. News of the idea was announced in a letter sent to voters by Superintendent Charlotte Macaluso and School Board President Barb Clementi earlier this month.

Sprouse said there are no formal agreements or commitments in place. At this stage, it is just an idea.

“Right now we’re really in the process of informing the community of some options that are out there,” Sprouse said.

The exact amount that the district is thinking of pitching in to help the city build the aquatic center is unclear. Figures reported for both the 2-high school and the 4-high school options show that total costs that have grown by roughly $20 million.

Sprouse pointed out that some of that additional money is intended for a centralized production kitchen and to help the district’s charter schools with their building needs.