PUEBLO – Mayor Nick Gradisar has the office space. Now all he needs are the workers to join him at City Hall.

“We’re getting off to a quick start,” he said wrapping up his first official week on the job.  “We’re working hard, a lot of it has to be behind the scenes at this point.”

On Monday, City Council will vote to shift $100,000 budgeted for the Deputy Mayor position to fund the salary of the new Chief of Staff.  The City Charter requires the Deputy Mayor to also be a department head, and those salaries are already funded in the budget. 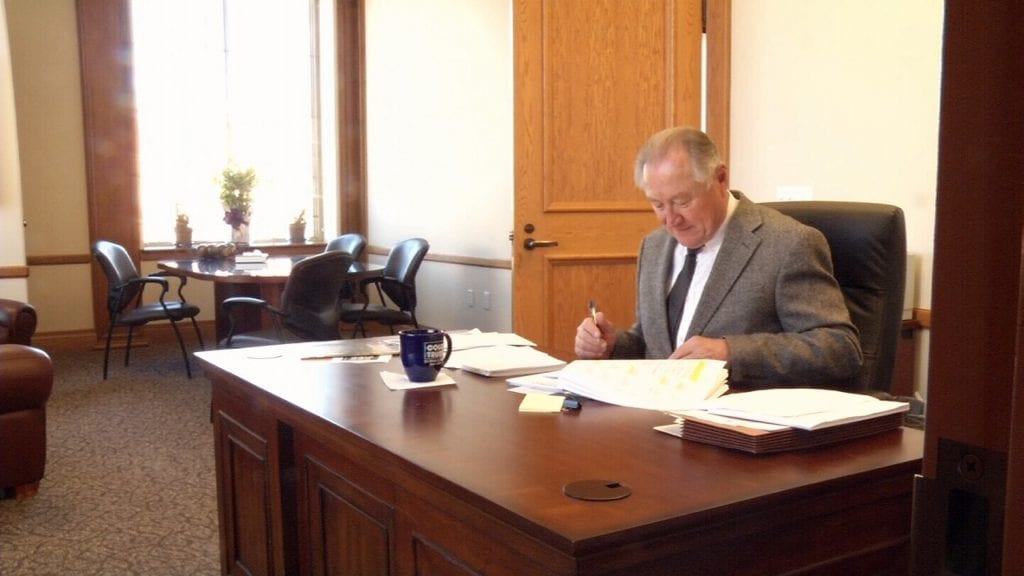 Pueblo Mayor Nick Gradisar looks through paperwork at his desk in City Hall.Gradisar met with the department heads earlier in the week to discuss the position.

“I asked them to let me know whether or not they’re interested in being the deputy mayor and I’ve got some interest expressed by some of the department heads.”

He explained the Deputy Mayor will primarily run their department, but they will also assume additional responsibilities with the Mayor’s Office.  Some department head may be ineligible due to the fact that they do not reside within the City limits.

Gradisar eventually wants to add two more jobs to his executive staff; a grant writer and a communications director.

“I have talked to the City Council about the importance of having a public affairs person in the mayor’s office, somebody that can help promote Pueblo, the City Council and the Mayor’s Office, make sure that we’re getting our message out to the media and to the citizens of the community,” he said.

Creating those jobs could take some restructuring or additional funding from City Council. In the meantime, he plans will spend the weekend reading white-papers from each of the department heads, catching up on what’s been happening throughout the City.

The City also has immediate openings for a new Finance Director and Secretary to the Mayor.

CLICK HERE FOR A FULL LISTING OF JOB OPPORTUNITIES WITH THE CITY OF PUEBLO.