COLORADO – Talk about bad timing, the latest blast of arctic cold and snow blew in to Southern Colorado just as folks were headed to work and school on Monday morning. Snow totals varied from place to place. Meteorologist Jessica Van Meter says that in Colorado Springs proper, just about an inch fell, of course that is the official total at the airport, other parts of town may have received more snow. City and County plow crews were out early this morning, trying to get ahead of the snow and ice, but it was a difficult commute for many. 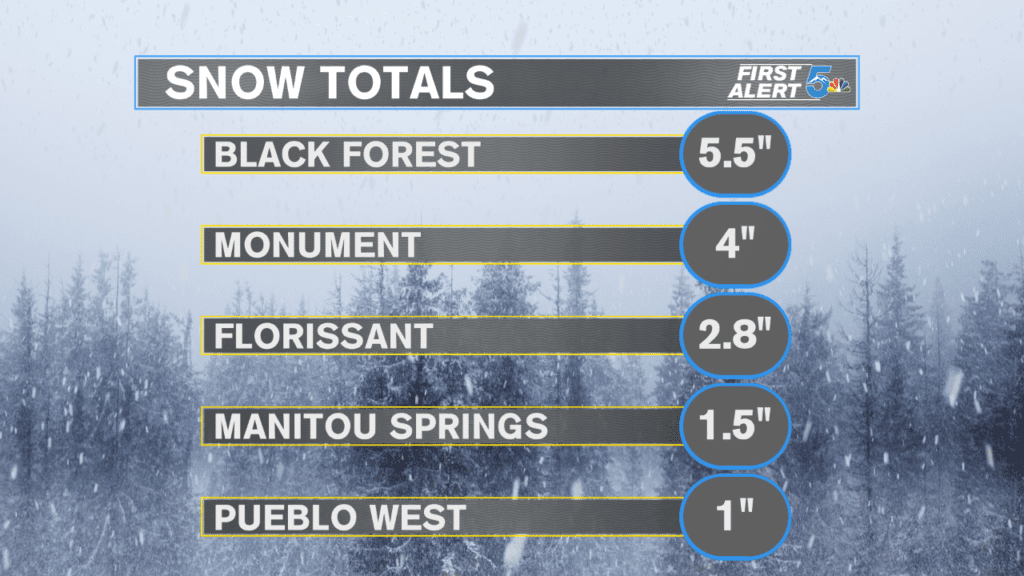 We are told that county and city crews will continue to work twelve hour shifts overnight on Monday in to Tuesday, particularly on side streets where the meltdown that began around noon on Monday is expected to re-freeze overnight, as temperatures dip down in to the teens and single digits.

School District 11 Transportation Director Nick Soto told News5 that typically, they hold a conference call with his peers in other local districts the night before the storm in order to game plan. They look at such things as accumulation expected, wind gusts and wind chill. If any of these factors pose a safety risk to kids, they will delay or cancel school for the day. However, he said that on Monday, the snow started falling while buses were already on their routes and many schools had already opened their doors.

Further north in Black Forest they received more than five inches of snow. Pueblo and Pueblo West received .08 inches and one inch, respectively.

Our crews also ventured further south of Pueblo to Colorado City and Beulah, where a little more snow fell. The interstate south of Pueblo was also a mess, particularly for some of the big rig drivers, some had to be towed out of the snow so they could continue their journey.