America’s ultimate challenge is right around the corner

PIKES PEAK – America’s ultimate challenge is coming up! The Pikes Peak Ascent and Marathon is happening this Saturday and Sunday.

Imagine running a half or full marathon on flat land, sounds challenging in and of itself right? Now take that to the next level, literally, and imagine doing so vertically up a mountain.

The races begin at the base of Pikes Peak and climb nearly 8,000 feet to the top of America’s Mountain. What’s different about this race is your first big turn isn’t a left or a right, it’s straight up. 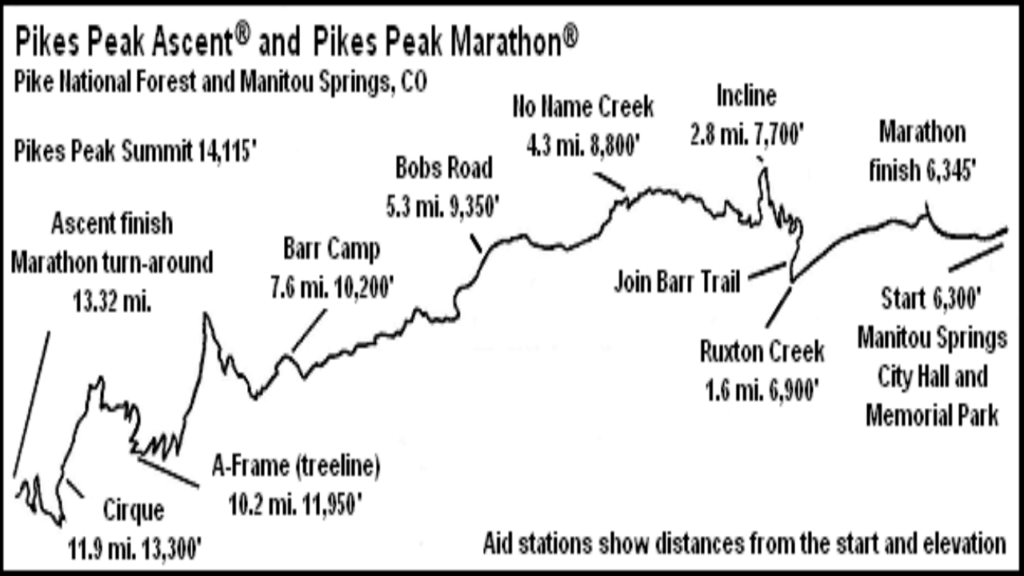 Runners begin at 6,300 feet and make their way up winding, narrow trails to 14,115 feet and for marathoners, they have to make that voyage back down. According to the event Facebook page, runners gain 6,000 vertical feet in the first 10 miles and then another 2,000 vertical feet later in the race.

Typically above treeline, runners take 30 minutes or more just to run one mile. The little air available at that height gives the lungs, legs, and heart a run for their money.

To add insult to injury, the terrain is filled with gravel, rocks, and dirt with many sharp turns and changes in direction along the way.

“It’s a death march right out of a scene from Dawn of the Dead,” according to the event Facebook page. That isn’t all, a major factor that can affect racers is that unpredictable Colorado weather.

Rapid and sometimes bizarre weather changes above treeline are possible when racing up Pikes Peak. Temps can vary as much as 50 degrees between Manitou Springs and the upper parts of the mountain, according to the event website.

Both Saturday and Sunday look relatively dry, according to our News 5 weather team.

At the start of the Ascent Saturday, temps are expected to be in the 50s and will drop to the 40s around noon at the top of the peak. However, thunderstorms could develop later in the afternoon.

Temperatures are expected to be in the 40s at the start of the Marathon on Sunday, with temps reaching in the 70s in the lower elevations around 5 p.m. Thunderstorms could develop throughout the afternoon at both high and low elevations causing some showers in the area.

But, as we know, that could change at a moments notice.

Racers must be able to prepare themselves for all types of factors, including the unknown. The event website has training tips and what to expect for those brave enough to run such a physically demanding race.

So how exactly does one qualify to run such a physically demanding race? Runners must complete a qualifying event before even registering.

Qualifying events must be from an organized and officially timed race, personally or group timed events will not be accepted. Here are the four ways to qualify.

For recent race veterans, anyone who has completed the Pikes Peak Ascent, Pikes Peak Marathon or Barr Mountain Race in the past 3 years with a time under the specified cutoff is considered a Peak Veteran. This automatically qualifies racers to enter.

For those who have not completed either the Pikes Peak Ascent, Pikes Peak Marathon, or Barr Trail Mountain Race under the cutoff time in the past 3 years is considered a Peak Rookie.

In order to qualify, racers must have completed a half marathon longer race in under 2:25:00, a marathon or longer in under 6:00:00, or an Ultra (50k or longer) faster than twice the overall winner’s time.

Any runner who started the 2017 Pikes Peak Ascent or Marathon and earned a DNF/OCO/DQ may enter this year’s event under the 2nd chance category.

Lastly, for runners who would like to use the Garden of the Gods 10 Mile and Summer Roundup Half Marathon as their qualifying race, they will be seeded into the appropriate wave in the Ascent based on performance during either race.

So the question is, which of one of you will be racing up Pikes Peak next year? For more information on the weekend schedule, race times, qualifying information and more, click here.